BABY IS AS BIG AS A
POMEGRANATE!

Decisions, decisions. Now that you’re 17 weeks pregnant, start making firm plans, like whether or not you’re going to find out baby’s gender (you should be able to soon!), and what kind of childbirth class you’d like to take. As you start making these decisions, the pregnancy will feel even more real, which is super exciting, but part of you is probably feeling a little anxious too. After all, you’re at week 17 of your pregnancy; that’s almost halfway through and there’s so much to do, it can be overwhelming. Our best advice? Don’t try to do it all yourself—ask for help. And whatever doesn’t get done? You’ll find it’s not that important anyhow.

A baby at pregnancy week 17 is the size of a pomegranate. Your 17-week fetus is about 5.1 inches long and weighs about 5.9 ounces.

17 Weeks Pregnant Is How Many Months?

When you’re 17 weeks pregnant, symptoms are most commonly due to your rapidly growing baby. Here’s what you’re likely feeling this week: 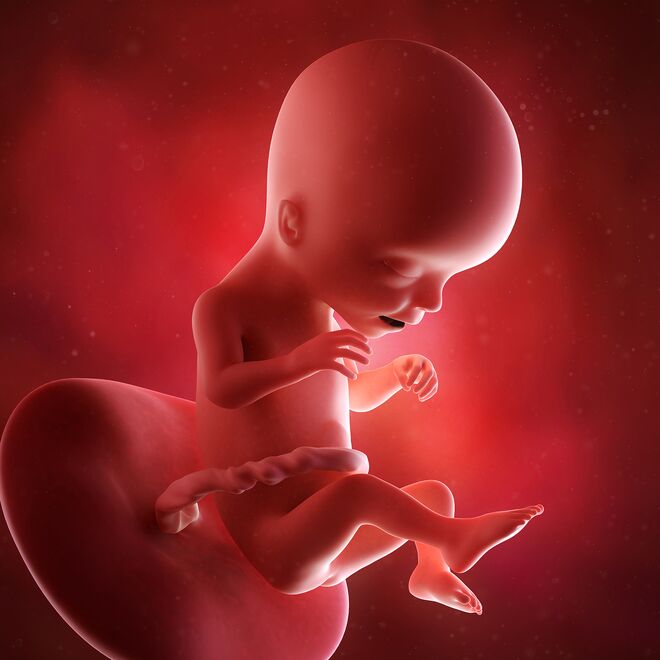 Baby's rubbery cartilage is now turning to bone. And baby's growing some meat on those bones, putting on some fat. Your 17-week fetus is growing a stronger, thicker umbilical cord too.

You may have a 17 weeks pregnant ultrasound if you’ve opted to have a cordocentesis. In this procedure, umbilical cord blood is tested for signs of chromosomal abnormalities. The doctor uses an ultrasound to find the place where the cord meets the placenta—that’s the spot where she needs to remove the blood. Typically, this diagnostic test is performed after 17 weeks; it may be used if amniocentesis results were inconclusive and you and your partner want a more definitive answer about baby’s health.