What to Do About a Yeast Infection During Pregnancy

How to Treat (and Prevent) a Yeast Infection During Pregnancy

Like heartburn and cankles, expectant moms are more prone to this itching, burning condition. Here's what you need to know about diagnosis, treatment and prevention. 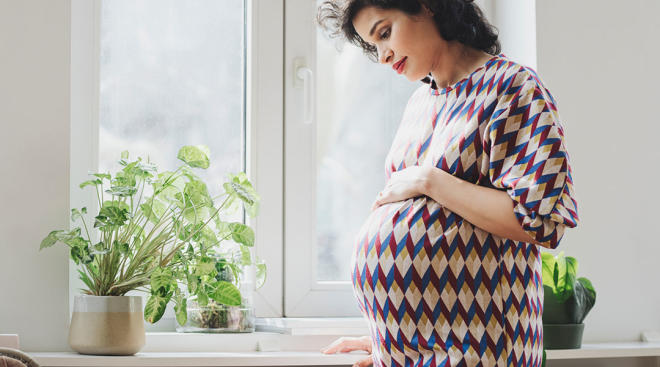 When you imagined yourself with a baby in your belly, you might have pictured yourself sporting an adorable bump, glowing skin or thicker hair—not fighting back the urge to scratch your lady parts in public. Unfortunately, pregnancy and yeast infections are kind of like gin and tonic—they often show up together. The good news? Yeast infections are usually just a nuisance and not something that can harm your baby, and it’s also safe to treat them to ease your discomfort. Here’s the lowdown on having a yeast infection during pregnancy.

What Is a Yeast Infection?

A yeast infection, also called candidiasis, occurs as a result of an overgrowth of candida, which is a fungal organism that is found inside the body, including the vagina. “Rarely do they pop up all of a sudden—usually this is something that gradually gets worse over time, and is more of a nuisance than a major condition or an emergency,” says Michael Tahery, MD, an ob-gyn and urogynecologist in private practice in Los Angeles.

Are Yeast Infections Common During Pregnancy?

Unfortunately, yes, yeast infections during pregnancy are common, and a little trip back to elementary-school science class can help explain why. Remember the concept of pH? When it comes to your vagina, somewhat acidic is better. “We want the acidic environment, because it helps prevent yeast infections and bacterial overgrowth,” says Tahery. But when you’re pregnant, increased estrogen levels can throw things off, causing pH levels to fluctuate. “There is also more sugar in the vagina, which can lead to an overgrowth of yeast,” says Cara Delaney, MD, MPH, an ob-gyn at Boston Medical Center.

Can a Yeast Infection Affect Pregnancy?

Although it’s never fun to hear the word “infection” when you’re pregnant, the good news is that a yeast infection during pregnancy is not likely to harm your growing baby, although it may spread to their mouth or diaper area (this is known as thrush). “It’s possible to pass the yeast to baby, which is usually a mild and treatable infection,” says Delaney. But then again, “babies often get thrush anyway, whether or not their mothers have had a vaginal yeast infection.”

That said, each physician we spoke to stressed the importance of visiting your provider in person (this is not the time for a phone call!) to confirm that you have a true yeast infection, rather than attempting to self-diagnosis and choose medication on your own. “It’s crucial that people come in and get evaluated, because sometimes patients assume they have a yeast infection, but it’s actually a bacterial infection, which also causes discharge and discomfort, or the two can run together,” says Kameelah Phillips, MD, an ob-gyn in New York City. For a bacterial infection, your doctor would prescribe some kind of oral or topical antibiotic.

A bacterial infection (also known as bacterial vaginosis, or BV) during pregnancy is not something you want hanging around. “It can put you at risk for preterm labor and other complications like premature rupture of membranes,” Phillips says. Tahery adds that sometimes when a patient suspects a yeast infection, there might be other issues at play even beyond BV. “You might have a urinary tract infection, irritation from a new detergent or, in rarer cases, a sexually transmitted disease, and yeast-infection medication isn’t going to solve any of those things,” he says.

Symptoms of Yeast Infection During Pregnancy

The most common yeast infection symptoms during pregnancy (and any other time) are:

However, some women may have a yeast infection and experience no symptoms, and only discover you in fact have one through happenstance. “Because we culture pregnant women at 35 weeks for things like strep B infection, I might find a yeast infection as well,” says Phillips.

How to Treat a Yeast Infection During Pregnancy

For a yeast infection in pregnancy, treatment is generally an over-the-counter vaginal cream or suppositories. These might include Clotrimazole (Mycelex, Lotrimin AF); Miconazole (Monistat 3) or Terconazole. Oral medications such as fluconazole (Diflucan) are not recommended during pregnancy.

If you have to wait a few days to see your doctor, Tahery says you can apply 1 percent hydrocortisone externally to help control itching. “If you are desperate, you can use a small amount just on the lips of the vulva, which will offer some relief,” he says.

But Tahery cautions against using boric acid suppositories to treat yeast infections during pregnancy. “Boric acid and other homeopathic treatments haven’t been tested in pregnancy, so I wouldn’t recommend them,” he says.

If you have a yeast infection that somehow goes undetected, it will likely clear up after you deliver. “These will usually self-resolve after pregnancy, unless you were having chronic yeast infections before you got pregnant, perhaps due to a condition such as diabetes,” says Tahery.

Sometimes having one yeast infection during pregnancy can cause repeated ones until you deliver. If you are having recurring yeast infections during pregnancy, it’s best to work with your doctor to figure out a plan. Along with medication, you may need to make lifestyle changes like wearing more breathable clothing or changing your underwear more frequently, since yeast thrives in wet, humid conditions.

How to Prevent a Yeast Infection During Pregnancy

There’s no guaranteed method of prevention, but whether you’re pregnant or not, here are some ways to decrease your chances of getting a yeast infection. “In general, you want to try to let the vaginal area breathe and minimize the amount of moisture down there,” says Phillips.

• Edit your underwear drawer. Make sure to choose underwear and tights with cotton crotches, and avoid wearing thongs or anything that’s too tight. You should also remove underwear before going to bed.

• Change out of damp stuff pronto. Don’t wear wet swimsuits or gym clothes for longer than needed, and wash them each time you wear them.

• With bottoms, go for a flowy look. If you’re opting for pants, keep them loose-fitting and breathable.

• Get bathroom hygiene right. It bears repeating: Always wipe from front to back after using the restroom.

Michael Tahery, MD, is an ob-gyn and urogynecologist in private practice in Los Angeles, as well as an assistant professor of obstetrics and gynecology at the UCLA Geffen School of Medicine. He obtained his medical license from the University of California, Irvine, and was previously chief of gynecology and director of the Center of Excellence in Women’s Continence & Pelvic Health at Cedars Sinai Medical Center in Los Angeles.

Kameelah Phillips, MD, is an ob-gyn in New York City and founder of Calla Women’s Health, her private practice. She received her medical degree from the University of Southern California Keck School of Medicine in Los Angeles. She is also a member of the International Board of Lactation Consultants and is especially interested in the areas of prenatal care, lactation, sexual health and menopause.

*Please note: The Bump and the materials and information it contains are not intended to, and do not constitute, medical or other health advice or diagnosis and should not be used as such. You should always consult with a qualified physician or health professional about your specific circumstances. *

Vaginal Discharge During Pregnancy: What’s Normal and What’s Not

How to Ease Vaginal Swelling During Pregnancy

The Deal with UTIs During Pregnancy