Just because someone’s already had a baby doesn’t mean they have the best advice. Learn what's fact—and what's pure fiction. When you’re pregnant, everyone and their mother-in-law (not to mention your own mother-in-law) is giving you unsolicited advice, from what to eat to how to spend your free time. Not only is it annoying, it’s often unhelpful—and sometimes laced with absolute untruths. Here’s some of the terrible advice and alternative facts real moms-to-be have heard about pregnancy, plus the actual facts you need to know to stay healthy and sane during those nine long months.

Bad Advice: Keep Your Arms Down

“I was told to not put my arms over my head because it would cause the umbilical cord to wrap around my baby’s neck.” — Melissa O.

The truth: It’s common for little ones to get entangled in the umbilical cord, but it’s not because of any movement that Mom makes, says Malavika Prabhu, MD, an ob-gyn at NewYork Presbyterian/Weill Cornell Medicine in Manhattan. So if you need to stretch your arms above your head, by all means, go right ahead. According to the March of Dimes, about 25 percent of babies are born with a nuchal cord (the medical term for having an umbilical cord wrapped around the neck). While it may cause heart-rate problems in baby during labor and delivery, it’s rarely a serious condition, and for many pregnancies the outcome is “normal and healthy,” Prabhu says. If it becomes potentially unsafe, a c-section can be performed.

“Someone told me to eat five chocolate bars a day during my last few weeks of pregnancy and the first month after birth so my milk would be rich enough.” — Maribeth K.

The truth: It’s okay to indulge in chocolate once in a while during pregnancy, but it really won’t help your milk supply. “Your body ensures your milk is high quality no matter what your diet,” says Juliana Parker, RN, a labor and delivery nurse and certified lactation educator in Kensington, Maryland. Plus, loading up on high-fat or high-sugar fare could contribute to excessive weight gain or gestational diabetes, she notes. Plus, chocolate contains caffeine, which you shouldn’t overdo (for more details, see below). Eating too much chocolate after pregnancy isn’t healthy either. Your diet while breastfeeding should mimic your diet while pregnant. That means lean proteins, whole grains, and fruits and veggies.

“I was told that swimming in a pool could cause my baby to drown.” — Lyzette M.

The truth: Babies won’t drown while you’re taking a dip. In fact, Prabhu says, “swimming is an excellent form of exercise during pregnancy” and she strongly recommends it. Don’t worry about the chlorine, either—it’s only a problem if you spend an unusual amount of time in the pool. But do steer clear of hot tubs. Spending more than a few minutes in water at 101 degrees Fahrenheit or hotter is associated with higher risks for neural tube defects.

“I was always told to gain as much weight as you want!” — Keyla C.

The truth: Unfortunately, life doesn’t turn into an all-you-can-eat buffet when you’re eating for two. Healthy weight gain during pregnancy should be about 25 to 35 pounds for women with a normal BMI, although you should ask your doctor what the recommended weight gain is for you based on your specific situation. “Too little or too much weight gain in pregnancy can lead to less healthy outcomes for mom and baby,” Prabhu says. On average, you should add one to five pounds in your first trimester and one or two pounds every week after that—and the weight should come mostly from healthy foods instead of, say, a nightly bowl of ice cream, says Prabhu. Above all, remember that growing a baby is hard work! Rather than stressing over the pounds, focus on eating healthy foods that nourish both you and baby.

Bad Advice: Stay Away from Coffee

“I was drinking a cup of coffee, and a guy told me that I might as well be drinking a beer. I was like, ‘Hey buddy, you can comment when you push a basketball out of your downstairs parts!’” — Danielle V.

The truth: While you should limit your caffeine intake during pregnancy, a cup won’t hurt (and no, it isn’t the equivalent of boozing while pregnant). The key is moderation. “Doctors usually recommend limiting your intake to 200 milligrams of caffeine per day, which you’ll get in 8 to 12 ounces of coffee,” Parker says.

If you typically drink more than that, then it’s probably worth cutting back. Try mixing a little bit of decaf into your brew, slowly upping the amount over the course of several days, Parker suggests.

“One of my friends told me to eat a lot of fresh pineapple to induce labor. That didn’t help; it just made me really sick.” — Caressa R.

The truth: Sorry, but eating pineapple hasn’t been proven to induce labor naturally, Parker says. You can try having sex, exercising and acupressure (if your doctor okays it), although these aren’t surefire ways to induce labor at home. Stay away from nipple stimulation, since it could lead to contractions that last too long and are too frequent; drinking castor oil, since it will dehydrate you, and anything else you’ve tried that’s made you more uncomfortable—like eating so much pineapple that you end up vomiting!

“I kept getting terrible headaches, and I didn’t want to take Tylenol. Someone told me to try smoking pot, because it’s a natural pain reliever.” — Shannon M.

The truth: You shouldn’t smoke during pregnancy—whether it’s cigarettes or marijuana or anything else. Smoking pot during pregnancy can affect the function of the placenta and may cause low birth weight or fetal distress during labor. “Legalization does not mean safety,” Prabhu warns. “Moreover, self-treatment in pregnancy is never recommended.” So talk with your doctor for the best way to treat headaches and other types of pain. It’s usually safe to take acetaminophen (Tylenol) during pregnancy, but stay away from ibuprofen and aspirin, which have been associated with heart and amniotic-fluid issues.

To treat your headaches naturally, place a warm towel on your face or a cold towel on the back of your neck. Rest in a room with the shades drawn, eat small meals throughout the day and take a warm shower. To avoid headaches, get plenty of sleep, exercise, eat healthy and drink lots of water.

Bad Advice: Opt for a C-Section

“I was told by a colleague not to give birth vaginally because my baby’s head would be deformed, and I wouldn’t be able to have sex again. What?!” — TLB

The truth: While there’s nothing wrong with wanting a c-section, know that—while it might look a little funny at first—baby’s head won’t stay disfigured forever with a vaginal birth. “When a baby is born vaginally, the head is typically swollen into a cone shape,” Parker notes. But before long—usually within a few days—it’ll mold into the cute, round shape you were expecting. Keep in mind too that your OB will be monitoring your pregnancy progress at every checkup, and they’ll recommend a c-section if baby is too big to deliver vaginally.

Delivering vaginally won’t stop you from having sex ever again either. (Phew.) It’s typically advised that women avoid sex after birth until they’re cleared by their doctor—usually around six weeks postpartum. “After that, you can resume sexual intercourse as usual,” Parker says.

“I’ve heard that you shouldn’t wear clothes that are too tight because it will squish the baby.” — Hannah E.

The truth: They might feel uncomfortable, but no, tight clothes won’t hurt baby, Prabhu says. So go ahead and show off your baby bump in maternity jeans or a fitted dress, though of course there are plenty of other options when it comes to maternity clothes these days.

“The funniest advice I’ve heard was this: Don’t carry a cat or it will steal your baby’s soul.” — Kyla C.

The truth: Cats are fine—it’s their poop that’s the problem. Cat feces can carry a parasite that causes an infection called toxoplasmosis, which can cause headaches, body aches and fever (among other ailments) in humans. If you get infected, there’s a risk of transmitting it to baby, Parker says, even if you don’t show any symptoms. Baby is most at risk of contracting toxoplasmosis if you become infected in the third trimester—but by that point most of the important development has already happened and the chance of any lasting harm to baby is lower. Baby is at the least risk of developing toxoplasmosis if you become infected during the first trimester, but the earlier in your pregnancy the infection occurs, the more serious the outcome for baby. To be safe, ask your partner or a friend to change the litter box.

Juliana Parker, RN, RNC-OB, CLE, is a labor and delivery nurse and certified lactation educator in Kensington, Maryland. She is the founder of My Pregnancy Pro’s Positive Childbirth Preparation Program, which offers online programs, resources and one-on-one coaching for expectant parents.

How to Deal with Rude Questions During Pregnancy 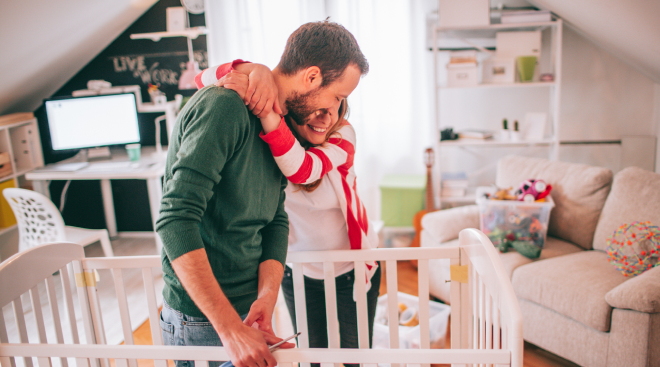 Here’s What You Actually Need to Do Before Baby Arrives