This condition is more common and more manageable than you might think.
Save article
ByMaggie Overfelt
UpdatedMar 2018 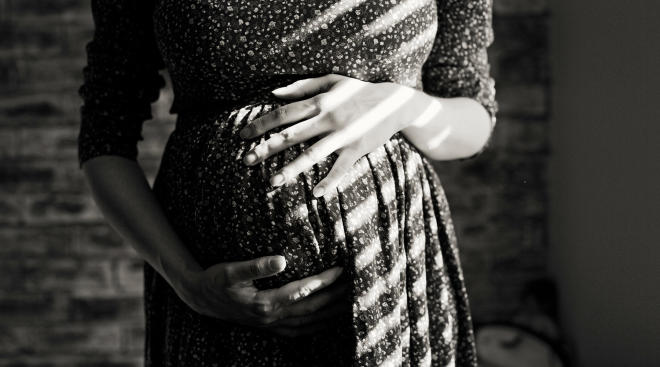 One of the biggest side effects of pregnancy is fear of the unknown. This affliction impacts almost all mothers-to-be, and runs the gamut from being a little worrisome to mentally crippling. Nuchal cord, or when baby’s umbilical cord is wrapped around her neck, is one such condition that can conjure up an exceptionally scary image of baby.

“One really old wives’ tale about nuchal cord is that as a woman reaches up, say to get something out of the cabinet, the umbilical cord will strangle the baby—this is not true,” says Kecia Gaither, MD, director of perinatal services at NYC Health + Hospitals/Lincoln.

In an effort to dispel such terrifying myths surrounding nuchal cord, Gaither and every other practitioner we spoke with all agree: While nuchal cords are very common in both pregnancy and labor, most of the time an umbilical cord around a baby’s neck slips off well before he is born—or can easily be slid off during delivery.

“While having the cord around the baby’s neck sounds frightening, most studies show that nuchal cord is usually not associated with complications during pregnancy or at birth,” says Annette McConnaughey, CNM, of MemorialCare Medical Group in Fountain Valley, CA. “Remember that baby is not breathing while in the uterus … it doesn’t really matter where the cord is—what matters is if the cord becomes compressed, which decreases the amount of oxygen going through the cord.”

What Is Nuchal Cord?

Nuchal cord occurs when the umbilical cord becomes wrapped around baby’s neck 360 degrees during pregnancy and/or labor. According to a recent study, nuchal cord transpires in roughly 10 percent to 29 percent of fetuses; odds of occurrence increase as baby continues to gestate.

Double or triple nuchal cords—when the cord is wrapped around the neck more than once—are common too, but health providers are quick to point out that nuchal cords really only become problematic when the cord is wrapped tightly around baby, which can restrict blood flow and potentially cause acidosis and anemia. That said, it’s hard to harm healthy umbilical cords, which contain a mucous tissue called Wharton’s jelly that helps prevent blood vessel compression. Up to half of nuchal cords are loose enough that baby’s movement in utero will cause them to slip off and right themselves before delivery.

“A nuchal cord does not ‘strangle’ baby in any typical way—it is the compression, the squeezing, of the cord tightly as baby moves down that causes a decreased flow of oxygen to baby, temporarily with each push,” says Rebecca Levy-Gantt, DO, an ob-gyn with Premier ObGyn Napa in Napa, CA.

Nuchal cords happen because babies—some more than others—are active in their buoyant surroundings and can get tangled up in their cords. “Babies play with their cords all the time; they don’t have toys in there,” said Jennifer Schell, MD, an ob-gyn with TopLine MD in Miami. “They grab the cord and they swim and sometimes get tied up; then they get untied.”

Some babies have an unusually long cord, which often accounts for those wrapped multiple times about the neck. According to Gaither, the length of an umbilical cord is about 20 to 24 inches while long cords are generally greater than 32 inches. Long cords might be also associated with babies who have true knots, or excessive twisting in their cords. A recent study showed that knots—which also can impede circulation of a fetus—only occur in 0.3 to 2 percent of births.

Signs The Umbilical Cord Is Around Baby’s Neck

Nuchal cords are more likely to cause problems when the cord is tightly wrapped around baby’s neck. The (very rare) worst-case scenario is what practitioners call a cord accident, where the umbilical cord is wrapped so tightly around baby’s body (it doesn’t have to be his neck) that it obstructs blood flow in umbilical veins, which could result in death. According to a recent study from the Stillbirth Collaborative Research Network, cord accidents represent roughly 10 percent of stillbirths.

• Decreased heart rate during delivery. This is the result of poor blood flow to baby due to a compressed cord, which can tighten even more during contractions and a mother’s pushing. “Babies can only tolerate this for so long,” Schell says. “This is doctor dependent, but you usually need to do a c-section because the baby is in distress.”

• Umbilical cord prolapse. It’s extremely rare, but Jacbos says in instances where the umbilical cord comes out of the vagina before the fetus, there’s a good chance that pressure on the cord from the baby could result in restricted blood flow. This is always considered an emergency and usually entails a c-section.

• Physical irregularities. A tight nuchal cord can also cause physical aberrations on baby including facial duskiness, red or purple spots on the skin, and abrasions on the body where the cord was wrapped.

There is nothing that mothers and practitioners can do to correct a nuchal cord during pregnancy. If your practitioner suspects a nuchal cord during labor—“you don’t know it’s a nuchal cord, but it’s a good guess based on the patterns [of fetal heart rate],” says Dana K. Jacobs, CNM, in West Palm Beach, FL—they’ll be watching the fetal heart monitor closely. If labor is progressing along but baby’s heart rate is dipping a bit, a provider may roll the mother over to try and reduce compression or give her more oxygen, which might increase oxygen flow to the baby.

“If the fetal heart rate tracing dips below what we’re comfortable with and the mother is remote from delivery, we may try to avoid any further problems that could come up [and go with] an emergency c-section,” Jacobs says.

If a mother is close to delivery and her providers suspect a tight nuchal cord, Jacobs adds they may opt for an amnioinfusion, which infuses the uterine cavity with fluid to create buoyancy and might relieve cord compression.

Most babies being born with umbilical cords around their necks do just fine. Practitioners can usually slip the cord off the neck with their fingers after the head comes out, or they can deliver the baby through the cord’s loop. But if the cord is wrapped so tightly a practitioner can’t slide her finger underneath it—and especially if baby is turning blue, which indicates poor circulation—they may have to clamp the cord and cut it before fully delivering the baby.

“In all the years I’ve been delivering babies—25 or more—I can count on one hand how many times I’ve had to literally cut the cord,” Jacobs says. “It rarely happens.”

Schell agrees. “Mothers-to-be shouldn’t worry about nuchal cords. They’re very common, we see them at delivery and the babies are perfect.”