Kristin Cavallari on Parenting Fears and Having a Baby Before Marriage

The mom, reality star and fashion designer dishes on what worried her most about having a baby, what life is like at the Cavallari-Cutler home during football season and why she doesn’t regret having baby Camden before her wedding. 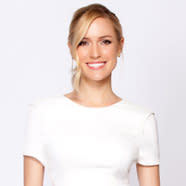 The Bump: What was your biggest fear before becoming a mom?

Kristin Cavallari: At first, I had set myself up for the first six weeks just to be brutal. Everyone I talked to said you walk around like a zombie and you get no sleep and it’s just really difficult. I had set the bar pretty high for it to be really bad and I was actually pleasantly surprised. It was definitely hard but I expected just to be a zombie and I wasn’t, so I think I just had that new mommy high and so it just felt great.

TB: Wow, that’s awesome! What’s your best advice for getting through those early weeks?

KC: Get all the help that you can. Luckily we had a lot of family around and so my mom came and stayed with me the first week, which helped a lot. Even just having someone else washing the dishes and taking out the trash for you makes a huge difference. Also, know it’s going to be difficult. Don’t beat yourself up about it, and just know it’s going to get easier.

TB: Football season has started. Is it hard because [your husband] Jay [Cutler] travels every week?

KC: It’s actually not bad. He’s only gone for one night a week so I can put a face mask on and do all my girly stuff when he’s gone, and it actually works out really well. We’re excited. Football season’s a lot of fun around here but at the same time it’s also kind of scary. Jay’s gotten hurt the last couple years so it’s definitely hard in some ways but overall it’s a lot of fun.

TB: So as far as parenting styles go, what kind of dad is Jay?

KC: We definitely agree on most things, which is great and helps a lot. He is an amazing dad and he has been since day one. He helps me with everything. He’s not the kind of guy that doesn’t want to change a diaper or do any of that. He’s very hands-on and it’s adorable to watch your husband with your little boy. They’re so cute together.

TB:  Was there anything that surprised you about being pregnant?

KC: I loved being pregnant, I really did. I loved it until the last month and a half when I was just so big and so uncomfortable. I was kind of surprised that I didn’t have any cravings, which I expected to.

TB: You and Jay had baby Camden before you got married. Would you have done it any differently if you had to go back in time?

KC: No, I wouldn’t have done it differently. That was the path that we’d gone down and I don’t regret anything. That was just what worked for us. We were engaged. We got engaged really quickly — after only eight months. We definitely weren’t ready to get married then and so we put everything on hold and we ended up having the baby before, and I think that when we did get married, we were absolutely ready. Everything happens for a reason and it all works out how it’s supposed to.

TB: You’re working on so many things right now — a jewelry line, a shoe line, a clothing line. How do you juggle all that and being a mom?

KC: I’m very fortunate. When I’m in Chicago, I work from home. I can make my own hours which is really great. I can do that while Camden’s sleeping or after he goes to bed.

But then when I go to LA to go promote the shoes or the jewelry, or to do whatever and I bring Cam, that can be a little stressful because there are long days, and I don’t get to spend as much time as I would like to with him.

I remember when I first had him, I had to go to LA. He was seven weeks old and I had to go to a photo shoot for my shoe line and I was breastfeeding him and so it was a challenge to stop every two hours — or hour and a half really — to breastfeed and then to get back in the groove and go take pictures. Those moments are harder but overall I’m very, very blessed that I’m able to work from home.

KC: Cam has been sick twice — once he had projectile vomit and that was really scary because he wasn’t eating anything and he had no energy and that really freaked me out. Your mom instincts take over and you want to protect this little guy from all the pain that he’s feeling.

TB: Do you have any tricks that make life easier as a new mom?

KC: I use dry shampoo so I don’t have to wash my hair every day. My diaper bag is always packed, ready to go, so if we have to leave I know I don’t have to worry about packing it. Sometimes after Cam goes to sleep, I’ll put out some food for him for the next day so that’s ready to go too.

TB: Are there any celebrity moms you look up to?

KC: Jennifer Garner. I don’t know her. I’ve never met her but she seems like a really great mom and they seem like a really down to earth, just normal family.

The Craziest Celeb Baby Names of All Time