Measles Mayhem: What the Outbreak Means for Baby

What you need to know about the outbreak and whether your vaccination fears are warranted. 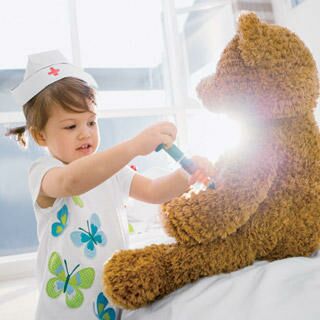 As measles spread last winter, affecting more than 160 people in 19 states, so did the level of concern. While it wasn’t a large enough outbreak to be considered an epidemic, it’s a troubling sign. In 2000, the virus was declared eradicated in the US after widespread vaccinations. “Measles are supposed to be totally gone from our country,” says Cheryl Wu, MD, a pediatrician based in New York City. Yet the CDC reports that the majority of patients affected this year—primarily through an outbreak at Disneyland—were not vaccinated. It takes only one person to spread the highly contagious virus, and 9 out of 10 people that come into contact with it will catch it if they haven’t been vaccinated or already had the disease. So what does this mean for you and baby?

Stick to the schedule

Babies typically don’t get their MMR (measles, mumps, rubella) shot until 12 months, but they’re considered in the clear if everyone around them is vaccinated. And newborns have an added level of defense—your own antibodies offer some virus-fighting protection for the first year. After that, babies begin to develop their own antibodies. “Waiting to administer the vaccine until baby is 12 months is ideal, unless you live in a community where there’s an outbreak or if you have plans to travel internationally,” Wu says. She adds that MMR is a live vaccine, which means it works like the nasal flu and chicken pox vaccines—you receive a strain of the actual virus. So if your child is younger than 12 months old and you’re taking her out and about where she might come into contact with others, what can you do?

Be diligent about day care

Unless there’s a measles epidemic, you probably won’t be able to convince your pediatrician to vaccinate your eight-month-old, even if she is in day care with potentially unvaccinated older children. If you’re concerned she’s at risk, Wu urges you to be vocal. “Day care centers don’t have to tell you if there are unvaccinated children enrolled. But I would ask to meet with the director to express your concern and try to get a feel for their policy on accepting unvaccinated kids.” A 95 percent vaccination rate is needed to prevent an outbreak from rapidly spreading. If they’re hesitant to speak with you or there’s any doubt, consider finding another day care.

On the home front

As for older siblings at home, not to worry—children who have received the first of the two measles vaccines will have 95 percent immunity, which is the same level of protection as adults who received the vaccine as a child. (That rises to 98 percent protection after the second shot.) So baby will be safe at home as long as you and your partner were vaccinated as kids (or anytime after) and her older siblings have at least one round of MMR under their belt.

If your child does contract measles, what then? And how do you recognize the signs? First, don’t panic. Measles used to be fairly common and many people, particularly those born before 1957, have lived through several measles epidemics. “It starts with a cough, runny nose and fever,” Wu says. “You may also see red eyes and Koplik’s spots [white spots that appear on the inside of the mouth, often on a reddened surface].” Three to five days after symptoms begin, a red and white rash spreads over the face and body. Unfortunately, there’s no medication— it’s like the flu, but more uncomfortable, so it’s really just a waiting game with lots of TLC, extra fluids and, if needed, nonaspirin medicine like acetaminophen or ibuprofen. As with other illnesses, alert the doctor immediately if baby exhibits any red flags like a high fever, abnormal breathing patterns or forceful vomiting or diarrhea.

Prevention for the win

So if you can recover from measles, why the hysteria? And why the insistence on vaccination? “We vaccinate because we’re scared of complications,” Wu says. One out of every 20 children with measles will contract pneumonia. And one out of every thousand can develop encephalitis, a swelling of the brain that can lead to convulsions, deafness and mental retardation. A more advanced form of encephalitis, known as SSPE, can affect 4 to 11 out of every 100,000 measles cases. But there’s no cure for SSPE. “If there’s no cure, what’s the second best thing? Prevention,” Wu says. “Vaccines are good for public health and the prevention of spreading viruses, but on an individual level, they’re good for preventing more serious complications from illnesses.”