Mom Shaming: You’ll Know It When You Feel It

It's easy to say you'll let it roll off your back—until someone says the exact wrong thing. 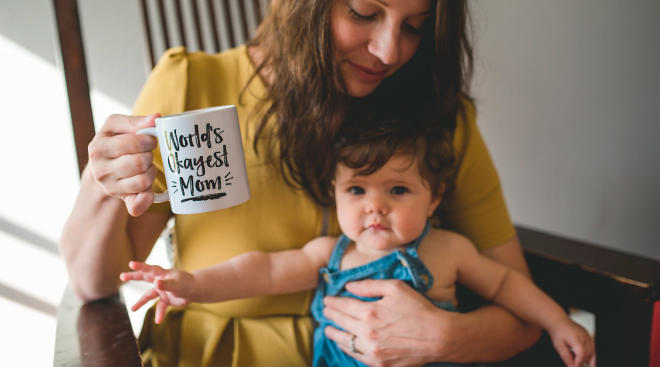 Whether or not you have kids, you’re probably already pretty familiar with the term “mom shaming.” It’s an ingrained part of our culture that’s been around for generations, and has become so rampant in recent years that I have yet to meet a mom who hasn’t experienced some degree of it. Perhaps it’s because of the onslaught of social media oversharing, or maybe it’s because people have gotten so bold and so brazen that they incorrectly believe that they have the right to judge someone else’s parenting experience. No matter how you slice it, it’s here and it sucks.

There’s the usual suspects when it comes to mom-shaming controversies: whether or not to vaccinate, allowance of screen time, and, the biggest culprit, how we choose to feed our babies (it still blows my mind that something so personal should ever be up for public debate). However, I’ve found that it’s not always the most blatant or obvious insults that can send a mom into a shame spiral. Sometimes it’s those subtle jabs, sideways glances or the seemingly innocent commentary from other moms in the drop-off line that can cause a woman to question her motherhood journey.

I’ve admitted to being on the wrong side of mom shaming in the past (read about how very narrow-minded I was before having kids), and, since then, have had a fair amount of off-color comments hurled my way. As a mom, you never know what is going to roll off your back and what is going to stick to you until you’re on its receiving end. For me, it was this indirect criticism said loudly enough for me to overhear: “Personally,” she began, “I didn’t have kids just to have them raised by a nanny.”

Ouch…that one hurt. I was already suffering from some pretty major mom guilt over taking on a project that occupied much of my time, and this person had found my Achilles heel and decided to nail it to the wall. Even though I knew better, I couldn’t help but be devastated by her thinly-veiled insult.

If she thought I was a shit mom, who else did? And…were they right?

I felt the need to defend myself, but didn’t have the cojones to confront her directly. (What can I say? It was a rare moment of discretion on my part.) My husband became my de facto battering ram as I explained to him all the reasons I chose to continue my career, and why I felt that was the best decision for me, but I wasn’t a minute into my rant before he cut me off.

“Leslie,” he said. “None of that even matters. We decided to get a nanny, because that was the best decision for us. Period.”

Although hard for me to admit (ever), my husband was right. He was super, super right. As a family, we decided to hire a nanny to help us; it didn’t matter the reason. It didn’t matter if it was because we needed a second income or not; it didn’t matter whether or not I had a prestigious career I couldn’t abandon; it didn’t even matter if I was a stay-at-home mom who just opted to have an extra pair of hands around because…BEING A MOM IS HARD.

Regardless of the reason, we made the best decision for our family, and as a grown-ass woman, I do not need to explain that to anyone else—not to friends, not to family and sure as hell not to a stranger.

In writing this essay, I reached out to my own mama tribe to ask other women what they’ve experienced, and the number of responses were overwhelming. Almost everyone had a mom shaming story to tell about being on the receiving end of such criticisms:

“You shouldn’t give her that much sugar.”
“I’d never let my kids run around a restaurant like that.”
“Isn’t he too big for a stroller?”
“You should really have socks on that baby.”
“Can’t you just work while she naps?”
“Oh…he’s still using a pacifier!”
“You can’t stay for circle time? What could be more important than your son?”
“No thanks, my kids don’t eat processed foods.”
“My daughter was fully potty trained by 20 months.”
“I don’t want to be that mom, but you shouldn’t be using aerosol sunblock….”
“Oh wow! He stays up late!”
“Can you do something? I can hear your little girl talking.” (said to a mom at a performance of The Nutcracker…for kids).

I actually understand where this “advice” is coming from. Raising kids is really hard, and it’s scary to wonder if we’re always making the right decisions. It’s much easier to bash someone else’s journey than it is to admit that the way we’re doing things isn’t necessarily the best or only way. We all love our kids and we want to be so resolute in our decisions that mom shaming, unintentional mom shaming, comes far too easy. Not to mention, shaming someone else is almost always more of a megaphone of our own insecurities than it is a reflection of the other person. We just all need to take a deep breath and remind ourselves that there are 100 different ways to raise amazing kids, and just because someone is doing it differently than us doesn’t mean they’re doing it wrong.

And if you find yourself on the receiving end of some hurtful remarks, don’t get mad or upset. Try (hard as it can be) to find some compassion, because you know you’re doing and have done your absolute best, and, unlike some people, you don’t need to shit on anyone else to prove it.

Leslie Bruce is a #1 New York Times bestselling author and an award-winning entertainment journalist. She launched her parenting platform Unpacified as a place for like-minded women to come together on relatable ground, no matter how shaky, to discuss motherhood through an unfiltered, judgment-free lens of honesty and humor. Her motto is: ‘Being a mom is everything, but it’s not all there is.’ Leslie lives in Laguna Beach, California with her husband, Yashaar, their 3-year-old daughter, Tallulah, and looks forward to welcoming a baby boy this spring.

It Is a Truth Universally Acknowledged: if You Want Unsolicited Advice, Get Pregnant
ADVERTISEMENT