When sickness strikes, just how long do you have to keep your little one home? From pink eye to flu, stomach bugs, strep and more, here’s when kids can go back to school. 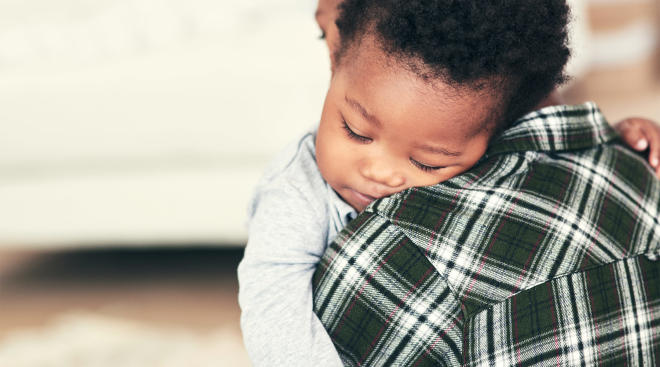 Your poor little one has been sick and out of school (or daycare or their regular classes). Fortunately, they’re feeling better. So when can they head back after getting over an illness? While it’s always best to talk to your child’s pediatrician and teachers about their specific rules and recommendations, here we discuss some common childhood illnesses and when it’s generally safe for your kiddo to be around others again.

Pink eye (or conjunctivitis) is when the tissue covering the white part of the eye becomes red and inflamed. It can be caused by bacteria, a virus, allergens or chemicals. Pink eye caused by bacteria is the type parents often remember from their own childhoods: red, painful eyes that are crusted over from the constant discharge. Viral pink eye usually leads to pink, watery eyes (sometimes in just one eye), while if your child’s eyes are red from allergies, they’re often also itchy, teary and involve both eyes (we see a lot of this during April and May allergy months!). Another common cause of pink eye is from chemicals, such as after being on vacation and swimming every day in a chlorinated pool. If your pediatrician thinks your child has bacterial conjunctivitis, they’ll prescribe antibiotic drops.

Hand, foot, and mouth disease is caused by viruses and is usually seen in summer and fall. Children with hand, foot, and mouth (we also add in butt here, since the rash is often seen on the tush) usually have a fever, complain of pain in the mouth, eat less, drool more and have the characteristic rash with blisters on the hands, feet, mouth (or around the mouth, on the tongue or on the inner cheeks and gums) and tush. Don’t be alarmed if you see fingers and toes start to peel a few weeks after your child recovers from this infection.

Kids can actually spread the virus from their nose, mouth and lungs for one to three weeks and from the stool for weeks or even months after getting sick, but they’re most contagious in the first few days of the illness. A child cannot return to activities if they still have a fever (they should have no fever for 24 hours without using fever reducing medications like ibuprofen or acetaminophen), or if they still have many open blisters (the blisters should be drying up), they’re not feeling well enough to fully participate in activities, they’re still drooling more than normal or the teacher feels your child is too sick to be in class.

The flu is caused by a group of viruses, and while it typically hits during the fall and winter months, we still see it through April! A child with the flu can have high fevers, cough, congestion, sore throat, achiness, fatigue, headache, stomach pain, vomiting, diarrhea or even pneumonia. The symptoms can last from a few days to a week or so.

A child who has had the flu can return to school when they’ve been fever-free for 24 hours (without having taken any fever-reducing medications). Of course they should also be well enough to participate in activities again without compromising their teacher’s ability to take care of the other kids.

Ah, the dreaded stomach bug! Children with a stomach virus are often nauseous and can vomit a few to multiple times, have stomach upset, diarrhea (two or more watery or loose stools) and a fever. Many times kids will vomit for 12 to 24 hours, and occasionally a few times after that if you introduce foods before their stomach is ready for it. Diarrhea can often occur alongside the vomiting or may follow the vomiting, and can last as long as five to seven days.

Many schools and daycares have their own guidelines, so it’s always best to check in with them—but we generally recommend that if your child has vomited two or more times in the last 24 hours, they should be kept out of any activities. According to the American Academy of Pediatrics (AAP), your child should also stay home if they’re having diarrhea and it’s not contained in the diaper, having stool accidents when they’re fully potty trained, having two more daily stools than what’s normal for them, or if the stools contain blood or mucus—in which case they should see a pediatrician. Once the vomiting, diaper leaks, potty accidents and extra bowel movements cease, your child can likely get back to their usual schedule.

Group A streptococci is a bacteria that’s a common cause of strep throat. According to the AAP, strep in children younger than 3 years old results in mild symptoms, like a low fever, thickened nasal discharge, irritability and decreased appetite. Older kids with strep throat can have a sore throat with red, sometimes pussy tonsils and a fever, but can also have other symptoms such as a headache, enlarged and tender lymph nodes in the neck, vomiting and a sandpaper-like red rash (strep throat with the sandpaper rash is called scarlet fever). To diagnose strep throat, a pediatrician will swab a child’s tonsils to test for Group A streptococci with a rapid test (results come back in a few minutes) and also a culture (results should come back in one to two days). Strep throat needs to be treated with an antibiotic, usually a penicillin.

Pediatricians used to tell parents their kids needed to be on an antibiotic for 24 hours before returning to school, but guidelines have recently changed. According to new policy from the AAP, children with strep throat from group A streptococci should not return to school or daycare until they’re appearing well, haven’t had a fever for 24 hours and have been on antibiotics for at least 12 hours.

Common Illnesses That Don’t Require Your Kid to Stay Home

Ear infections are very common in young children, but they aren’t contagious. If your child doesn’t have a fever and appears well enough to go to school, even if they’re on antibiotics they can still attend school or other activities.

Children also may experience a few common colds during the winter, and the same rules apply—if they have no fever and are acting like their usual self, they don’t have to be kept out of their daily activities (but they should still sneeze into their arms, use tissues and wash their hands well!).

Meet Dina DiMaggio, MD, and Anthony F. Porto, MD, MPH, official spokespeople for the American Academy of Pediatrics and the co-authors of The Pediatrician’s Guide to Feeding Babies and Toddlers. They write about the latest AAP guidelines, studies and seasonal issues affecting babies and toddlers. Follow them on Instagram @pediatriciansguide.