Warts don’t look so cute — but they’re totally harmless. Here’s how to know if baby’s bump is a wart and what to do about it if it is.
Save article
ByJennifer L.W. Fink
Registered Nurse
UpdatedMar 2020 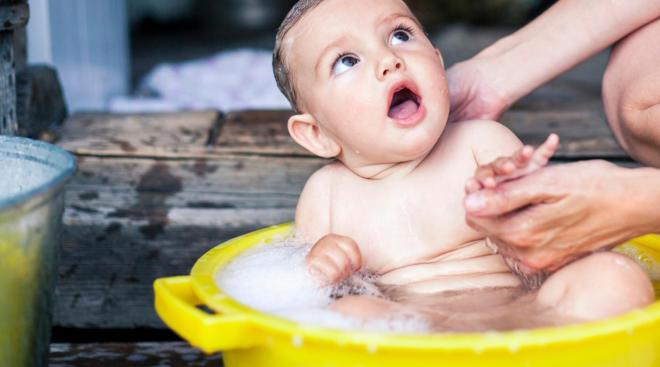 What are warts in babies?

Warts are common skin growths caused by human papillomavirus (HPV). Note: There are dozens of kinds of HPV — this isn’t the same HPV as the one that causes cervical cancer.

Warts are often described as having a cauliflower-like appearance. That’s because they’re usually raised and bumpy, with a surface that’s somewhat rough and uneven.

Warts can be a nuisance, but they’re harmless.

What are the symptoms of warts in babies?

Look for the classic cauliflower-like appearance. If your child has a raised, rough, uneven bump on his toe, knee or hand (the most common places), it’s probably a wart. (Warts can — and do — occur on other parts of the body too. Warts on the face are more likely to be flat. Warts on the bottom of the feet may appear flat, too, especially in kids who are walking.) Warts may have a slightly dark center.

Are there any tests for warts in babies?

Warts are almost always diagnosed based on appearance and the patient’s history. Lab tests and blood tests usually aren’t needed.

How common are warts in babies?

Warts are pretty uncommon in infants but are increasingly common as kids get older and come into contact with other kids. Ten to 20 percent of kids will develop warts at some point, most commonly after the age of 12.

How did my baby get warts?

Warts are very contagious. “If somebody in the family has warts, other family members tend to get warts too,” says Natasha Burgert, MD, FAAP, pediatrician at Pediatric Associates in Kansas City, Missouri. The virus that causes warts can live on household surfaces, so warts can be spread via the bathtub or floors.

What’s the best way to treat warts in babies?

“Warts are easily treated at home,” Burgert says, as long as you follow the proper techniques.

“In order to really make over-the-counter regimens work, you have to get rid of the crusty, hard skin on top of the wart,” Burgert says. “After a good bath or shower, gently rub the surface of the wart with a nail file or a pumice stone, just so that the wart is really soft. Then you can use any sort of OTC treatment much more successfully.” If you don’t take steps to remove the top layer of skin, it’s difficult for the medication to penetrate deeply into the wart.

If you try a home wart-treatment kit and it doesn’t work, take your child to the doctor. They may use a prescription medication to remove the wart, or may recommend doing nothing. According to at least one study, many warts resolve on their own within two years with no treatment.

What can I do to prevent my baby from getting warts?

If someone else in the house has warts, wipe down tub surfaces and floors with a diluted bleach solution before putting your child down on those surfaces. It’s also a good idea to use a separate towel and washcloth for each family member.

What do other moms do when their babies have warts?

“[My son] has some little bumps on the back of his head. We asked the doctor about them at his nine-month checkup a few weeks ago, and she said they were baby warts — I don’t remember their actual name — and that they would go away on their own. Now one of them is getting a little bigger and is kinda red around the outside.”

“It looks like DD has a cluster of four or five warts on her big toe. Is this something you would go to the pediatrician for? They don’t seem to hurt her, and they don’t stick out — they’re flush with the skin — they’re just really rough.”

“I’ve used a combo of duct tape and apple cider vinegar before! It works well! I’d put the vinegar on a piece of cotton ball and leave it on overnight with a Band-Aid; then take that off and put on duct tape during the day. It works faster than duct tape alone.”

Are there any other resources for warts in babies?