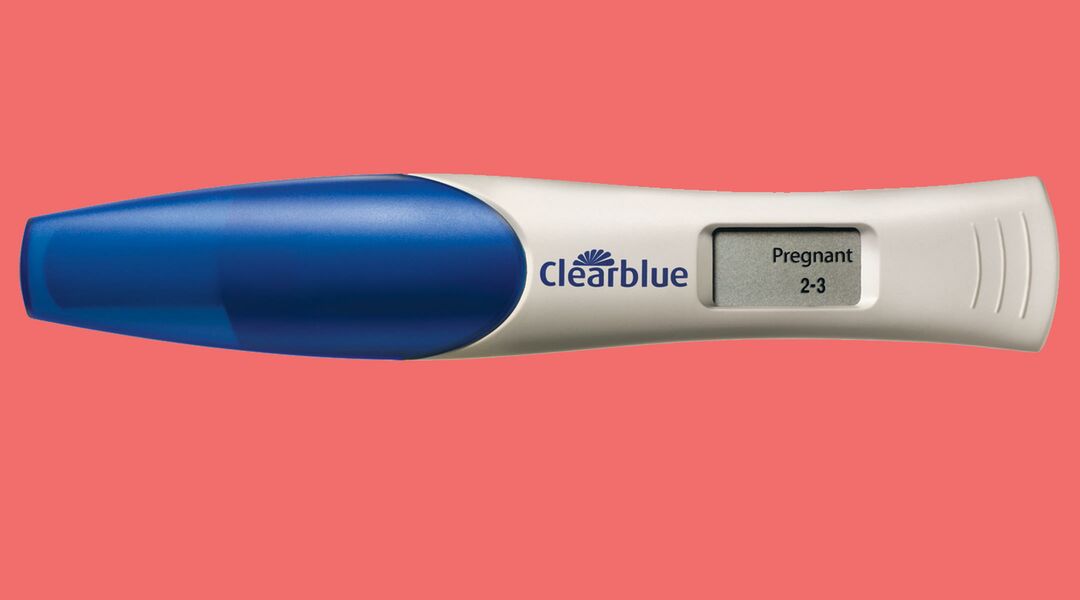 Are you shopping for a home pregnancy test? The latest Clearblue Advanced Pregnancy Test with Weeks Estimator will not only tell you if you’re pregnant — it’ll estimate how many weeks into your pregnancy you are!

The test contains two strips instead of the standard single strip, with both strips measuring human chorionic gonadotropin (hCG), the hormone that women produce when they’re expecting. When a woman is pregnant, the hCG levels increase significantly and can be measured through a woman’s urine during the early weeks of pregnancy. (hCG levels tend to decline 11 weeks into pregnancy.) Much like the standard pregnancy tests available, the latest test from Clearbue measures hCG levels but now with the second hCG detection strip, the home test uses the hormone to estimate the length of the pregnancy based on time since evaluation. So, if you’re pregnant, the test will read “Pregnant” and then list 1-2, 2-3 or 3+: an indication of how many weeks into your pregnancy you are.

The test, launched in 2008, is already available in Europe and will be available in the United States at all major retailers beginning on September 1. In December of 2012, the FDA approved the kit for the market after reviewing results from Clearblue’s clinical trials, which included 2,000 women and 5,000 tested urine samples. The trials determined that hGC measurement was, in fact, effective and accurate for estimating how far along a woman’s pregnancy was. To back up the clinical results, Clearblue says the test is 99 percent accurate at detecting pregnancy from the day of a woman’s expected period. It’s also 93 percent accurate in estimating how far along she is.

Ryan Daly, the Marketing Director at Procter & Gamble, the company that makes the home pregnancy test, says, “Through our consumer research, we found consumers were really wanting more information at the beginning of pregnancy. In fact, 78 percent of women in our research study feel that knowing how far along you are at the beginning of pregnancy is very important.” Adding, “We’re excited to bring this to the US because there is nothing else like it. Consumers have been looking for more information and answers in the pregnancy test category and there hasn’t been any innovation since the digital pregnancy test was launched.”

While the new test is certainly groundbreaking, Clearblue affirms that it isn’t meant to be used as a substitute for those early doctor’s visits, sonograms and ultrasounds; However, the home-based test could be helpful way of reassuring women that they are pregnant until they’re able to get confirmation from their doctor. But for women who have irregular periods, the test could help pinpoint the timing of a pregnancy more accurately before a woman has the chance to get to her doctor.

Will you use the new pregnancy test?

Photo: Photo Courtesy of the Manufacturer