How Motherhood Brought Me to My Unshowered, Unshaven Knees

This mom learned the hard way: honest parenting means admitting just how difficult motherhood can be. 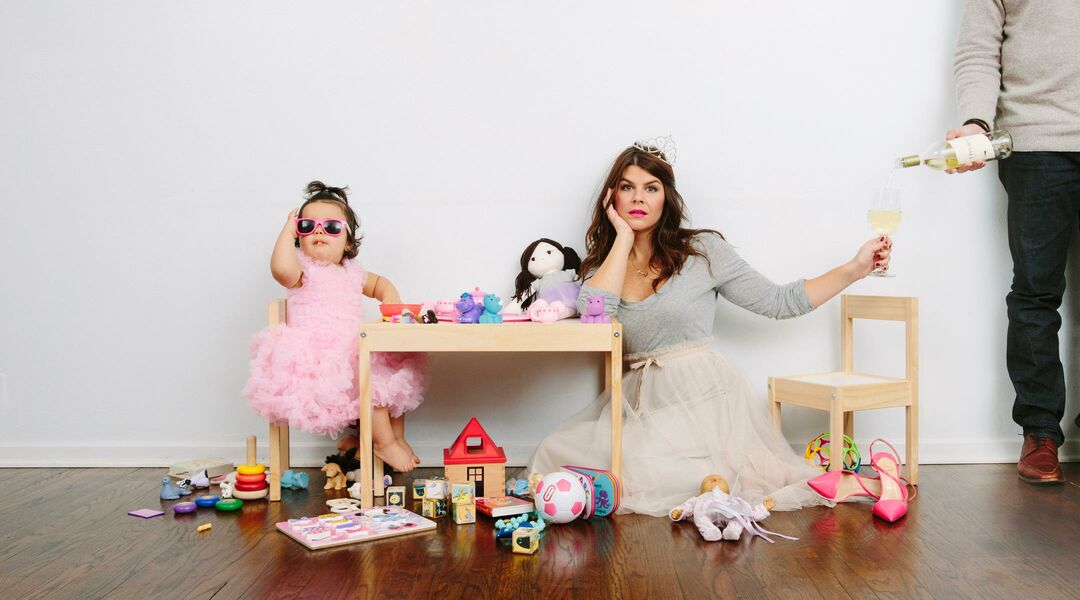 I pushed the screen out of our second story bedroom window, grabbed my husband’s iPhone and tossed it onto our very brick, very hard patio 20 feet below.

He looked at me in astonishment, but said nothing.

It wasn’t the response I expected—or really even wanted. As I covered the distance from the window to the closet, I, at the very least, had the awareness to recognize that I was a walking, talking one-woman promotion of the “crazy bitch” stereotype.

But, in my defense, it wasn’t my fault. I had a 7-week-old baby who hadn’t slept more than three consecutive hours since being born and a soon-to-be blistering case of mastitis, and my husband had the audacity, the absolute carelessness, to go and get sick. Contagious, nonetheless, with the flu prohibiting him from his nightly “dream feed” duty—his to-do that allowed me the one thing I looked forward to all day: five straight hours of sleep.

A pair of Nikes were lying on the closet floor—approximately 12 inches from where they easily could have been put away. So close, yet…so far. Who did he expect to put them away? The magical shoe fairy who tiptoes into our house every night to quietly store his shoes, the balled up socks and the rogue belt slithering around the bedroom? I grabbed a shoe—and I’m not talking about no Nike Flyknit here; I’m talking about a clunky ass retro Air Jordan 2—and chucked it with fierce dedication. I was half aiming at his head, and half aiming at the wall behind his head. If it hit him, I could feign ignorance and frustration: I meant to hit the wall, why did his head have to get in the way? If it didn’t, I always meant to hit the wall…so don’t try to paint me out to be this psycho!

I had, apparently, reached my breaking point.

My husband had been back at work for nearly six weeks; my mother, who had come to stay for the first five weeks, had to return to her own life; and the parade of well-wishers who poured through the door those first few weeks had come to a shrieking halt. It was just me, my fussy newborn, lots of tears, very little sleep and the newest Taylor Swift album. If someone was trying to gaslight me, well…success!

I spent most days alone with a beautiful little baby who I couldn’t seem to make happy. If I managed to get out of our bedroom before 11 a.m., that was a huge victory. We woke up, fed, burped and changed. I rocked her back to sleep, which usually took about an hour (if it succeeded at all), and then placed her in the bassinet before silently hovering over her for 10 minutes, willing her to remain asleep. If her eyes stayed shut, I would have some decisions to make: Do I pump or shower? Do I shower or pee? Do I pee or eat? She would either sleep for 15 minutes or 50 minutes, so it was a total coin-toss. I could feasibly shower, pee and eat at the same time, but if I were to pump, I might actually be able to leave the house for an hour that night to get a manicure (or cry silently in my car). But what if I pumped and she woke up crying right after? I would have no milk left to feed her…so I’d have to give her the bottle I just wasted 20 minutes pumping, and then have nothing to show for all that “free time” I just had. You can see just how easily “crazy” starts to kick in.

Why is this so hard for me?

To an outsider, it looked like I was owning this whole motherhood thing. On social media, I posted the obligatory photos with sappy captions talking about how becoming a mother was “the hardest, most rewarding thing I’ve ever done.” But my Instagram life was just for show (not much has changed visually, but I at least try to keep the captions real). It’s what I felt I needed to do because I saw countless other women, with their inexplicably blow-dried hair and evenly applied mascara, taking angelic selfies with sweet little newborns waxing poetic about the journey that is motherhood.

In reality, I was bouncing incessantly on an exercise ball, popping Motrin like candy to keep my c-section scar from burning while trying in complete and utter vain to get my baby to stop crying. She seemed to dislike everything: the stroller, the car seat, the swing, the carrier, the wrap, the bouncer…and so on and so on.

I have a master’s degree. I’m a New York Times bestselling writer and I’ve created a path for myself in an industry dominated by men. I’m fierce, relentless, bullheaded and notorious for getting my way. And this little human had brought me to my unshowered, unshaven knees.

And what’s worse? I couldn’t help but think the unthinkable…that which a new mother could never say out loud. I wanted my old life back.

I think that I, along with the rest of society, expected to tackle the transition into motherhood like everything else in my life: with self-sufficient gusto. But no matter the countless baby books I read, I was wildly unprepared for this new role.

From colic and bottle sterilizing to swaddles and nipple blisters (like, what the actual f—k?), I was in a brave new world that no classroom or boardroom had ever prepared me for. I felt like I was failing, and that was a horrible, horrible feeling. Let me be clear: I was grateful, blessed and wildly humbled by her very existence. I was well aware it was not my daughter’s fault, and my goal really was to be the best mom I could be for her. But that doesn’t mean I wasn’t incredibly, incredibly overwhelmed. 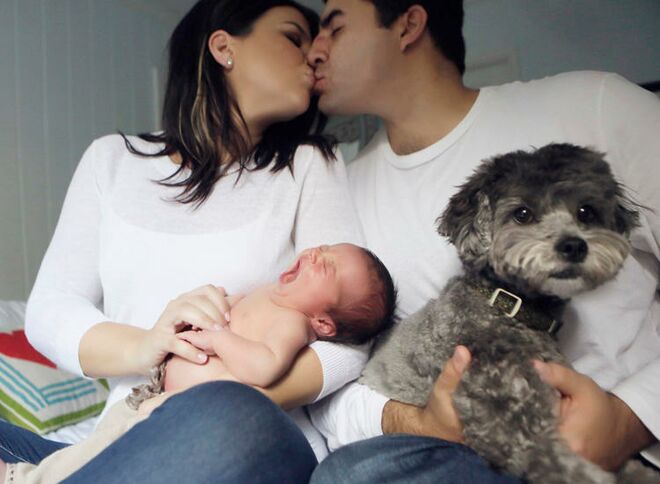 On top of being certain I was completely fumbling this whole parenthood thing, I also felt a complete and total loss of self. My physical, emotional and mental identity were unrecognizable. I was someone else entirely—with a raging case of hormones.

For 32 years, I was a selfish person. I mean, we all are before kids, right? My husband was relatively self-sufficient, as were my family and friends. Even pregnancy is all about the mama. I could shower when I wanted, see a movie when I wanted, stay late at the office or plan a quick getaway. In my 10 years post-college, I had built a life for myself…and all of that was being flipped on its head.

Someone asked, “Why do you think it was so hard for you?” For me, I think the answer is simple: I had no idea what I was doing and felt completely out of control. All I wanted was to make her happy, and yet it felt like I couldn’t do anything right. Everything had changed, and nothing could have prepared me for it. Even now I’ll read back on things I wrote during those first three months, and I don’t recognize myself. How could one person so feverishly obsess over the number of ounces of milk her child, who had no trouble gaining weight, consumed? I’m not going to lie to you, there were plenty of times that I retreated to my garage with a sloshing glass of red wine and sobbed to Adele. It felt right…until a neighbor came looking for the source of those “alarming sobs.”

If you’re anything like me, you want answers. How can I avoid a similar experience? How can I prevent myself from going down that rabbit hole?

To be honest, I’m not totally sure you can…but you can do your best to soften the blow by surrounding yourself with support and being willing to ask for help. Whether actual or virtual, we all need help and encouragement to cope with this very large life event. When I finally opened up to a few of my best friends, they began sharing with me their own experiences. While none of our journeys mirrored the others’ exactly, we all shared similar themes that often included helplessness, anxiety and an unparalleled desire to do a good job for our new little people.

“I thought I was the only one having this hard a time,” I confessed to one girlfriend.

“Leslie,” she said, with nonchalance, “we all had a hard time.”

And just like that, I wasn’t alone. It sounds all too simple, but I just needed a friend to help me realize that all of this really was normal. I realized that just because I had some sh-tty days, it didn’t mean I wasn’t a good mom. It just meant that motherhood is hard, and we’re all learning as we go.

In the end, I don’t think I really want my old life back (although I wouldn’t turn down a white noise-free weekend in Cabo). I just felt like I was being forced to abandon everything I was before becoming a mother. What I didn’t yet realize was that my daughter and I were setting out to create a new life…together. As the weeks turned to months, my newborn became this giggling little girl who smiled whenever I walked into a room, who reached out to me whenever she needed comfort, and who I had the great honor of helping to shape as she experienced and learned about the world around her.

I knew that anything I could have been absolutely paled in comparison to being this little girl’s mother. That doesn’t mean all the things I was before aren’t an intrinsic part of my identity—it just means that I’m a regular woman capable of wearing more than one hat. I can also walk and chew gum.

My daughter is now a lovely, kind, spunky 2-year-old…and I’m obsessed with her. I would suffer through those first few weeks 10 times over, for 10 times as long, if it still meant that at the end of it I would get her. That being said, I still don’t have a damn clue how mothers blow-dry their hair with any regularity.

Leslie Bruce is a #1 New York Times bestselling author and an award-winning entertainment journalist. She launched her parenting platform Unpacified earlier this year as a place for like-minded women to come together on relatable ground, no matter how shaky, to discuss motherhood through an unfiltered, judgment-free lens of honesty and humor. Her motto is: ‘Being a mom is everything, but it’s not all there is.’ Leslie lives in Los Angeles with her husband, Yashaar, and their 2-year-old daughter, Tallulah.