“Even in the trace amounts found in food, these contaminants can alter the developing brain and erode a child’s IQ.”
save article 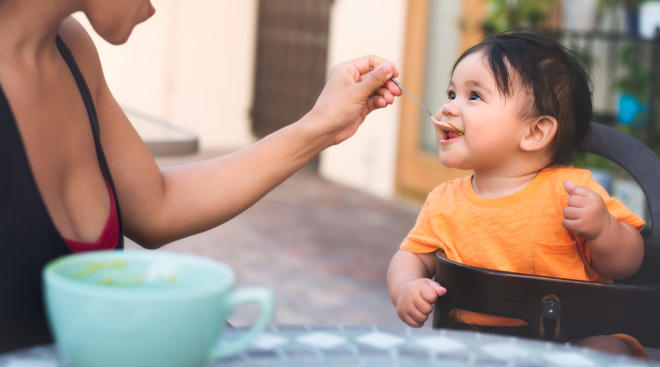 Introducing solid foods into baby’s diet can be an exciting but nerve wracking time. Parents of course want to make sure baby is getting all the important nutrients, so they often turn to trusted baby food brands. But according to a new study published by Healthy Babies Bright Future (HBBF), most of the baby food available on store shelves is likely to have trace amounts of toxic heavy metals.

“Even in the trace amounts found in food, these contaminants can alter the developing brain and erode a child’s IQ,” the report stated. “The impacts add up with each meal or snack a baby eats.”

A big part of the blame goes to government regulation–or lack thereof, study authors say. Despite the risks these toxic metals pose for babies’ developing brains, there still isn’t a regulated limit for the presence of toxic heavy metals in young children’s food, the study states. In response, the HBBF has teamed up with other nonprofits to form a Baby Food Council, with a goal of reducing toxic metals found in baby food products to an all-time low.

While the council has successfully reduced arsenic contamination levels in rice cereal and juice, they say, there’s still a long way to go. “Only a dramatically accelerated pace at FDA and the fruition of the new Baby Food Council’s pursuit of industry-wide change will be enough to finally solve the problem,” the report states.

For parents wondering what they can do to best protect their child, the HBBF has some recommendations. They advise parents to opt for rice-free packaged snacks, which have 93 percent less toxic metal residues—or better yet, switch out the snacks for apples, unsweetened applesauce, bananas, cut grapes, yogurt or hard-boiled eggs.

Similarly, switch out infant rice cereal—which is the top source of arsenic in an infant’s diet—for other grains, such as oatmeal, corn, barley and quinoa. Do the same for fruit juices, replacing them with tap water or whole and pureed fruits. (Remember, the American Academy of Pediatrics warns parents of juice’s high caloric and sugar content and advises no fruit juice for children under a year old and half a cup or less, daily, for children under 3.)

The results of the study are definitely startling, but don’t worry, there’s still a lot you can do to make sure baby’s food is nutrient-rich and toxins-free. Check out our tips on how to make your own baby food with speed and ease.