Sure, a pacifier can soothe both baby and mom, but not everyone’s a fan. Find out the biggest benefits and drawbacks. 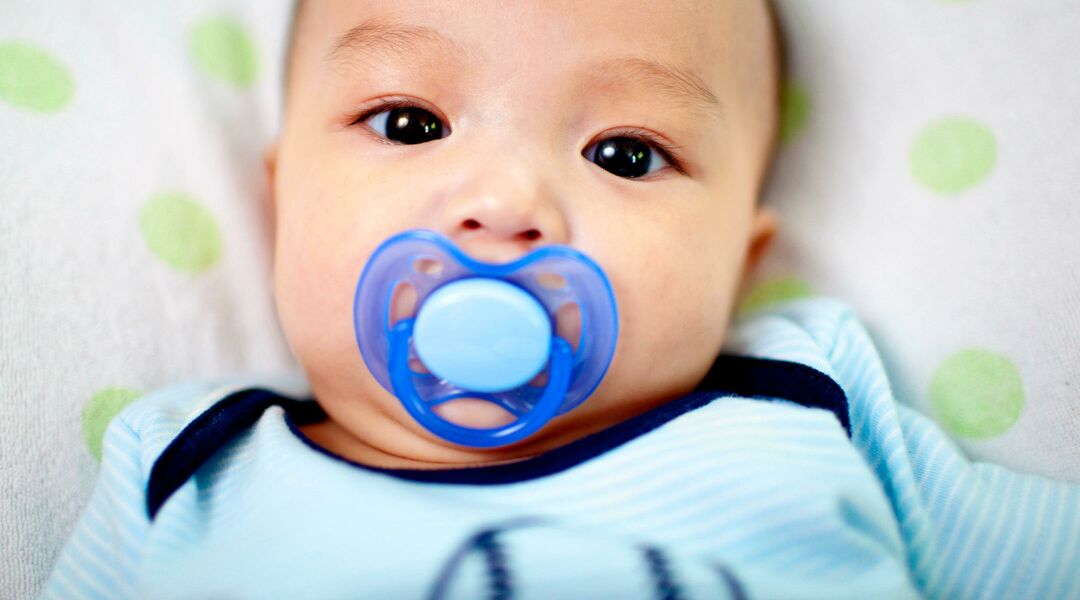 One thing all babies can agree on is that sucking on something is awesome—in fact, newborns use this primary reflex as one of the best ways to find comfort. “Newborn babies cry a lot, and if you find something that’s soothing to them, that’s really nice,” says Genevieve Brauning, MD, a family medicine doctor with Novant Health South Park Family Physicians in Charlotte, North Carolina. “From a practical point of view, a pacifier is on the short list of things that can give everyone peace and quiet.” But before you register for a dozen binkies, learn about the pros and cons of pacifier use to determine if it’s right for your baby.

In this article:
What is a pacifier?
Pros and cons of pacifiers
When to introduce the pacifier
How to get baby to take a pacifier
When should baby stop using a pacifier?

What Is a Pacifier?

An infant’s penchant for sucking is often satisfied at the breast or with a bottle. But, let’s be honest, you can only feed baby so much before soreness and exhaustion kick in, or baby is full. Not surprisingly, between 60 and 85 percent of infants are using pacifiers, according to studies.

A pacifier is a rubbery nipple, usually made from silicone or latex, designed to satisfy baby’s sucking impulse. Pacifier use actually allows baby to suck more rapidly—two sucks per second, compared to one suck per second while feeding—and satisfies the need that much faster.

Infant pacifiers have different nipple shapes: Some are flatter, which manufacturers claim may be better for orthodontic issues, and some are rounder, shaped more like the nipple on a bottle. Either way, there’s little evidence that one shape is superior; it may be a matter of trial and error to see which pacifier baby loves most.

Pacifiers come in a variety of sizes recommended for different ages. “You don’t want a newborn using a toddler-size pacifier, which can be overwhelming in his mouth, or a toddler using an infant pacifier, which will sit directly behind his teeth, pushing them outward and possibly leading to an overbite,” says Wendy Sue Swanson, MD, pediatrician and Chief of Digital Innovation at Seattle Children’s hospital. She recommends choosing a pacifier that’s made of one solid piece, so it can’t break apart in baby’s mouth. Pick pacifiers that have ventilation holes—they let air circulate, reducing the chance of a messy red rash developing around baby’s mouth. It’s also a good idea to keep an eye out for pacifier recalls on the Consumer Product Safety Commission’s website, CPSC.gov. (Need help finding the perfect pacifier? Check out our favorites.)

Pros and Cons of Pacifiers

There are some serious benefits of pacifier use—but there are also some important drawbacks. Read on to learn the pros and cons of pacifiers and how to determine what’s right for you and your child.

Aside from soothing baby and reducing crying, here are a few more reasons why pacifier use is so popular with parents:

• Reduces the risk of sudden infant death syndrome (SIDS). The American Academy of Pediatrics encourages pacifier use when putting baby down for naps and bedtime to help reduce SIDS. However, never attach one to her neck or crib with a strap, which can be a choking hazard.

• Encourages breastfeeding in mothers with PPD. A new study in the Journal of Human Lactation showed that mothers at high risk for postpartum depression did better with breastfeeding if their baby used a pacifier. Minimizing infant crying is especially important to vulnerable mothers who are easily agitated. As baby learns to self-soothe, Mom gets a little extra time between feedings, making things less stressful. In this case, pacifier use offers emotional support for both mom and baby.

• Distracts from stressful stimuli. Pacifier use during unpleasant situations—like a vaccination, a painful procedure or a run-of-the mill bump—can help make baby less upset. “It’s been documented that offering a pacifier can provide pain relief,” Brauning says. “It reduces how a baby senses pain and makes him more comfortable.” The one thing you don’t want to do is coat the pacifier with something sweet or sticky, which can cause cavities later on. Honey, in particular, is very dangerous to babies under one year, as it can cause infant botulism and even death.

• Helps preemies thrive. Researchers have found that pacifier use among preterm babies results in shorter hospital stays and better bottle-feeding. The study showed possible improvement in digestion when babies less than 32 weeks’ gestation sucked on a pacifier during gavage feedings (when nutrients are delivered to the stomach via a small tube up the nose).

• Eases air travel. Planning a trip? Pack a few pacifiers in your carry-on. “The sucking motion of the jaw provides a shift in the middle ear, where the baby can feel pressure when the plane is going up or descending,” Swanson says of pacifier use while in the air. (Of course, breastfeeding or bottle-feeding work just as well.)

One the other hand, these most common concerns about pacifier use may make you rethink that binky:

• Dental problems. Long-term pacifier use can affect the shape of the teeth and mouth, especially if baby continues to use it well into the toddler years. The jaw and the gum tissue are very malleable, and constantly keeping a pacifier behind the front teeth after age 2, but especially after 4, can create dental problems like an overbite or cross bite, Swanson says. And while there’s little evidence that baby pacifiers lead to speech delays, it can be hard—to say the least—to figure out what a toddler is saying when he’s trying to talk with a piece of plastic in his mouth.

• Risk factor for ear infections. A study of almost 500 children in Finland has connected pacifier use to ear infections. Children in the study who didn’t use pacifiers continuously had about one-third fewer ear infections than those who did use them. The theory is that when baby sucks or swallows, there’s a change in pressure behind the ear, which may shift fluids into the middle ear and cause an infection, Brauning says. Adding pacifier germs into the equation doesn’t help either. One compromise: Limit pacifier use to naps and bedtime, rather than allowing baby to suck on it all day.

• Too much dependence. Babies aren’t dummies: If something feels good, they’re going to keep doing it. Unfortunately, that means pacifier use can become addictive to babies and toddlers—picture baby howling at 2 a.m. when the paci falls out of her mouth, or a meltdown when it drops into a mud puddle and you forgot to pack an extra. Message boards are filled with desperate parents trying to find pacifier weaning solutions that don’t end in hysterics. For an easier transition, experts recommend starting to wean by one year, or even earlier—by 6 months, baby should be sleeping through the night, Swanson says, and since she’s too young to argue with you, you can easily go cold turkey.

When to Introduce a Pacifier

One of the most common concerns for introducing pacifier use is whether it’ll interfere with breastfeeding. “The way a baby sucks on a breast is different from the way he sucks on an artificial nipple,” says Leigh Anne O’Connor, an international board certified lactation consultant and La Leche League leader in New York City. “Some babies can go back and forth between breast and artificial nipples, while others are more sensitive.” They may struggle with “nipple confusion,” the somewhat controversial idea that baby may become accustomed to—and come to prefer—the feeling and texture of a synthetic nipple, and might not want to feed at the breast.

“Even in best-case scenarios, early breastfeeding is really hard for the first couple of weeks,” Brauning says. “It’s probably a good idea to wait to introduce the pacifier [until] mom’s milk supply is well established and baby is easy and comfortable on the breast, usually between two and eight weeks.” That said, some moms have introduced pacifier use as early as 10 days without marring the breastfeeding experience. If baby is bottle-fed from the start, you can give him the pacifier right away, since the nipple on the bottle is so similar.

How to Get Baby to Take a Pacifier

A crying baby may be ready to suck on a pacifier right away, or she may grimace, squirm and spit it out. For successful pacifier use, you’ll want to follow baby’s cues, and keep the following tips in mind:

• Learn to spot the sucking reflex. Figuring out whether they’re hungry or just want to suck on something isn’t so much a philosophical question for infants as much as it is an observation on parents’ part. Newborns are born with a basic suckingreflex, which is activated when something touches the roof of their mouth. “When the palate is stimulated [during sucking], it relaxes the baby,” O’Connor says. Fortunately, figuring out what baby wants will be fairly intuitive. Since nursing is often the first line of action to appease both hunger and soothing cues, infants may feed hourly. By six to eight weeks, feedings start to follow a reliable routine, so you can tell if baby is hungry or just fussy. “Satiated babies stop sucking hard enough to get milk out of breast or bottle—they might even push it away,” adds Brauning. “But they might still take a pacifier if they need comfort.”

• Know when to quit. Some babies don’t have a high suck demand and simply have no interest in pacifier use. “If he isn’t taking the pacifier, it’s not necessarily the right soothing technique for him,” Brauning says. “There’s no health benefit that means you should push it on him.” Baby will find an alternative soothing mechanism, like his thumb or even puckered air-sucking, as a replacement for pacifier use.

When Should Baby Stop Using a Pacifier?

Sometimes babies decide they’re done with pacifiers and just stop pacifier use on their own. If that happens, consider yourself one very lucky mom! Otherwise, there will come a time when you will have to do the dirty job of taking it away by starting to wean around 6 months to a year. Ideally, for dental development, you want to try to say bye-bye to binky permanently by your child’s second birthday. “Baby will cry for a little while, but after a couple of days, he’ll adjust and figure out another way to self-soothe,” Swanson says. In need of some tips for when and how to take away the pacifier? Head here to read about pacifier weaning techniques.