"You’ll smile, you’ll wave, you’ll be radiant, but between your legs will be a whole different story,”
Save article
ByStephanie Grassullo
Associate Editor
PublishedMar 2019 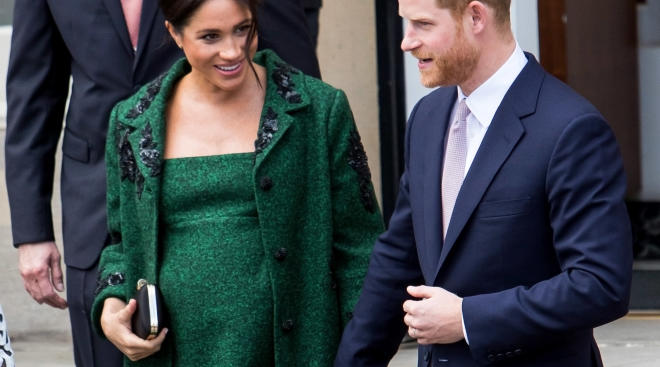 Chelsea Rosen Hirschhorn, the CEO of Fridababy, has an important letter to deliver to Meghan Markle, and she took out a full-page ad in The New York Times to make sure her message is heard. Her main point of contention? The famous post-baby photo op outside of the hospital.

Since Princess Diana’s time, it’s become an unofficial tradition for women in the royal family to stand on the steps of the hospital where they have just given birth—typically the Lindo Wing at St. Mary’s Hospital in London—and present their new baby for the first time. Kate Middleton has kept the tradition alive with all three of her children, even gracing the public with her perfectly put together appearance mere hours after giving birth to Prince Louis and Princess Charlotte. And while the notion is a beloved and highly-anticipated moment, it couldn’t be any further from what post-birth recovery is really like.

Which is why in an ad titled, “An Open Letter to the Royal Mom-To-Be,” Rosen Hirschhorn is calling on the Duchess of Sussex to squash this false illusion.

“You will soon give birth to one of the most anticipated babies in the world and like your princess predecessors, you’ll be expected to parade outside of the hospital in front of throngs of photographers to show off your new bundle of joy shortly after giving birth. You’ll smile, you’ll wave, you’ll be radiant, but between your legs will be a whole different story,” she warns.

“Sure, your blowout will be perfect for your hospital step photo-op, but people will be opining on all the wrong things instead of having an honest conversation about what women go through during birth and immediately thereafter,” the letter continues. “In my line of work, we tackle the side of childbirth that won’t get as much airtime. Women are breaking down barriers left and right, so why is it still considered taboo to talk about the raw aftermath of what your body just went through?”

As a mom of three herself, Rosen Hirschhorn knows a thing or two about recovery after baby. While everyone’s experience is different, one thing that’s for sure is it’s no cakewalk. “Spoiler alert: bringing a new life into the world usually starts with your vagina, and the aftermath is a mess,” she writes. “The bleeding and swelling will linger, peeing will burn, and sitting like your old self will feel like a herculean feat. And if it’s a c-section, there’s a whole host of other issues to tend to.”

“Use this stage to do your part for all women who are about to embark on their first ‘fourth trimester,’" the ad pleads. “And if you really can’t skip it, then at the very least flash us a glimpse of the mesh underwear underneath to keep it real.”

Stretch marks, scars and other changes are part of what makes up a mother’s beauty. They tell a powerful love story and are nothing new moms should be ashamed of or hide. Little by little, we are slowly changing the narrative through campaigns and social movements that honor the reality of having a child, but we still have a long way to go.

“We’ll be rooting for you on your path to recovery and hope you take all the time you need—because raising a human requires feeling like a human. Trust us, your vagina (and baby) will thank you.”