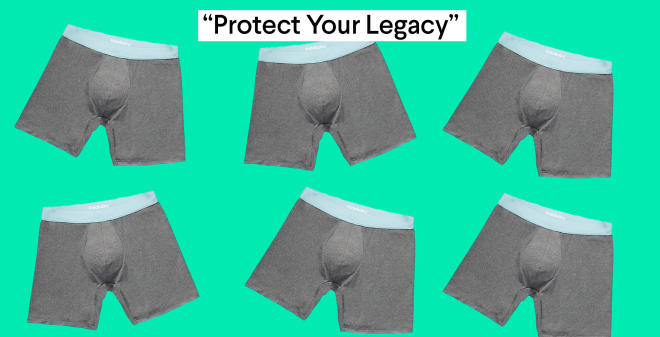 This year, the most popular Father’s Day gift wasn’t new golf shoes or a “#1 Dad” coffee mug. It was a pair of underwear that sold out in less than 24 hours and already has a waiting list with thousands of names.

Why? It turns out, when you’re a dad, the hits just keep on coming. Sure, cuddling your kids is super-cute, but unexpected kicks and jabs can be downright dangerous for unprotected dads. Which is why so many people are excited about a new style of underwear from FridaBaby, designed for the specific purpose of protecting the family jewels.

“You know how a kid comes by and he swoops your nuts?” says Splitting Up Together star Oliver Hudson in a promo video for FridaBalls, the world’s first kid-proof underwear. “He ball taps you and you just crumble to the ground? That’s not going to happen anymore.” Dads, rejoice!

FridaBalls are boxer briefs that come with a reinforced protective front pouch to soften any blows from little feet, knees and elbows. (Your Saturday morning snuggles just got a whole lot safer.) They also boast a never-slip waistband, “because crack is always wack,” and a patent-pending “Heirloom Conservation Technology.”

As hilarious as this is, it’s also a serious business venture. Each pair retails for $28, which seems pricey—but based on the response so far, they must be worth it.