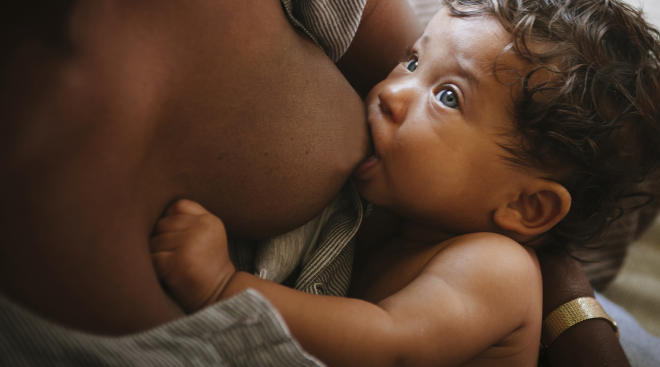 Figuring out a timeframe for breastfeeding baby can be tricky. Although the American Academy of Pediatrics recommends that you breastfeed baby for at least a year, there’s not tons of guidance beyond that. And while you might feel that all your mom friends weaned their kids after 12 months, others swear by comfort breastfeeding for as long as baby needs it. However, new research shows that there might be an ideal cutoff time for baby’s dental health: 24 months.

Children who breastfeed for over two years have more than twice the risk of having severe cavities, according to a study published on Friday in Pediatrics. Researchers studied the dental health of over 1,000 children in Brazil, looking at both sugar consumption and exposure to breastfeeding. They found that breastfeeding from 12 to 23 months didn’t lead to higher cavities, but the risk raised significantly past that.

There’s a long-used phrase that researchers mention, though, that should be kept in mind here: correlation doesn’t equal causation. And in this case, researchers don’t know exactly why breastfeeding might lead to more cavities. They have a working theory, though, that researchers told CNN. Because children who are breastfed past age 2 are usually fed at night and on demand (as with comfort breastfeeding), their parents tend to have a more difficult time keeping these toddlers’ teeth clean at night. However, the researchers say that it’s important to study other environmental factors that might lead these outcomes, such as socioeconomic status. Furthermore, they’re not sure that these findings can be applied to the rest of the world.

“I believe that general extrapolation of our findings is uncertain, suggesting that this could be made only for populations with similar patterns of breastfeeding and exposure to fluoride,” lead author Karen Peres, MD, tells CNN.

Regardless of other possible factors, the researchers say that the link is strong enough that it should be taken seriously. “Preventive interventions for dental caries should be established as early as possible because breastfeeding is beneficial for children’s health,” the report says. So if you choose to feed baby for longer than 24 months, keep a close eye on oral hygiene—and remember the AAP now advises brushing baby’s teeth with fluoride.

Walmart Is Adding Mamava Breastfeeding Pods in Over 100 Retail Stores

Survey Finds Moms Are More Committed to Breastfeeding During COVID-19