Rumor alert! Here’s the scoop on the latest Royal Baby buzz.
save article 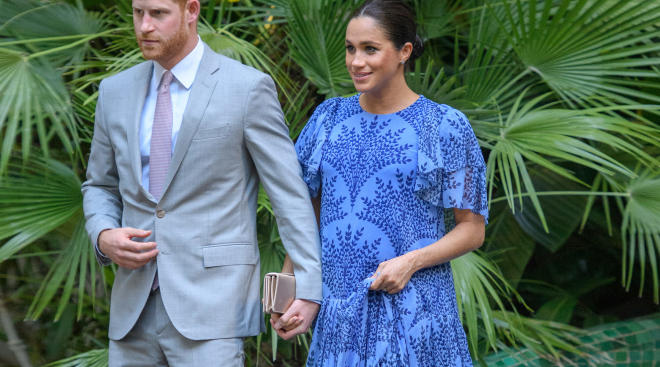 While the Duke and Duchess of Sussex are still cozying into their Frogmore Cottage home in Windsor, the pair may be amping up for an even bigger move in the near future. Over the weekend, an article in London’s The Sunday Times claimed “courtiers have drawn up plans to hand the Duke ad Duchess of Sussex a major international job that could see them moving abroad after the birth of their child.”

Just where is the soon-to-be family of three rumored to be relocating to? Word on the street is they’re headed to a Commonwealth country in Africa. Here’s why. The Sunday Times reports David Manning, the former British ambassador to the US and advisor to Prince Harry and Prince William, has proposed a plan for the family to take on an international position that could build on their work for the Commonwealth.

For a little background, the pair both hold roles within the Queen’s Commonwealth Trust, where Prince Harry is president and Markle is vice president. Plus, in 2006 the Duke started the charity Sentebale, to help kids with HIV in Lesotho and Botswana. Botswana is also a meaningful spot for the couple. Prince Harry and Markle traveled there early in their relationship during the summer of 2016, and then again the following year to celebrate Markle’s birthday. Further adding to the speculation, the pair shared a never-before-seen photo of them during their 2017 trip on their recently-launched shared Instagram account.

The two have several other ties to Africa as well. Prince Harry has put a lot of his time and energy into conservation work there, and has once described it as his “second home.” He’s the president of African Parks and patron of the Rhino Conversation Botswana. Markle also has a special attachment to the continent. In 2016, she became the global ambassador for World Vision Canada and traveled to Rwanda for the Clean Water Campaign.

Admittedly, it seems a bit far-fetched and could simply be one of many rumors feeding into the Royal Baby frenzy, but some people are convinced it’s the real deal. Perhaps more plausible, Rebecca English, The Daily Mail’s royal correspondent, reported that rather than move to Africa full-time, a source has mentioned that the Sussex family will have a six-month “secondment,” because an African sabbatical has reportedly been a life-long dream for Prince Harry. "At the moment, this is very speculative. There haven’t been formal conversations with anyone from Commonwealth countries or governments,” according to English’s report. “But his team are starting to scope out a long-term planning strategy for the Sussexes and there is a good chance this is a scenario that could work.”

And just what do the royals have to say about this? Staying true to form, Buckingham Palace released a vague statement where it didn’t flat-out confirm or deny the reports. “Any future plans for The Duke and Duchess are speculative at this stage. No decisions have been taken about future roles,” the statement reads.

Looks like we’ll have to wait a bit longer before getting to the bottom of this one. Just add it to the list of Royal Baby rumors, including baby name theories, twins on the way and a home birth delivery.