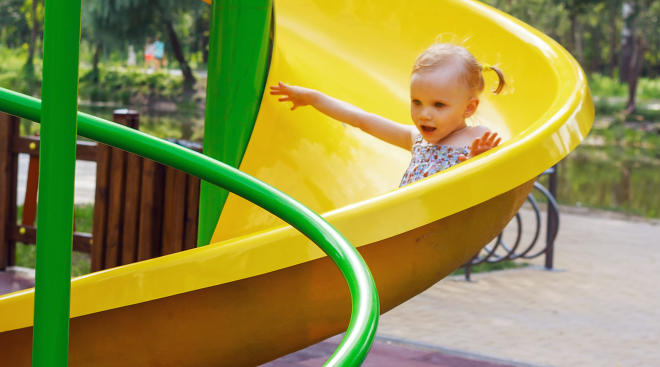 As any mom or dad knows, parenthood can be messy, and sometimes you just have to roll up your sleeves and get your hands dirty. One mom’s hilarious tale of trying to clean her toddler’s diaper explosion off the playground slide is a shining example of just how much crap moms heroically handle every day.

Brittany Nicole Berry took her kids to the playground last weekend and watched her daughter Sadie have fun on the slide. She then noticed her toddler’s pants were wet and initially assumed her diaper had leaked—but then she got a whiff, and discovered it was actually a lot worse.

According to Berry, who shared the incident on Facebook, it wasn’t just poop, it was a “poop-trophe”—think newborn blowouts, where “it’s all up then back and down their legs and you contemplate just throwing the whole baby away,” she jokes. Since there was no one else in the playground at the time, Berry stripped Sadie down, trying to get her clear of the poop that was already on her back, her legs and even in her hair.

Berry grabbed her diaper bag to clean up the mess, only to find herself in short supply of wipes—there were only four, and this was not going to be a four-wipe job. While she desperately dug through the bag looking for extras, she heard a sound, and looked up to see Sadie sliding down the slide, slowly leaving a long skid mark behind her, the whole way down.

Like any responsible human, she knew she couldn’t leave the slide as it was, not just because poop is a terrible playground surprise, but also because her other child had a stomach virus and knew Sadie might be getting the virus too, and was now spreading those germs (in the grossest way possible) all down the slide.

Our intrepid mom jumped into the car with her kids and raced home, about five minutes away, to grab Clorox wipes, then raced back. Good news: The wipes worked. Bad news: There was a whole section of the slide she couldn’t reach. Her solution? Go down the slide herself with the wipes in hand, cleaning as she went—on her stomach, feet first. (A heroic feat, to say the least.)

When she got back to her van, she realized the poop was now all over her shirt. She had three options: get poop all over her seat belt (no), skip wearing the seat belt entirely (no), or—you guessed it—remove the shirt.

She drove home in her bra and then posted the whole, hilarious story on Facebook, where it racked up almost 600,000 reactions and nearly 350,000 shares.

While Berry had been hesitant to share her story, saying, “I’ve debated on sharing this, just because it’s so embarrassing and I failed as a mother on so many different levels”—but to her surprise, the reactions have been wholly supportive, appreciating the hilarity of it all and impressed by her determination and fortitude.

"You should truly write a book!!” someone suggested. “I love real, honest, don’t-hide-the-messy-parts people,” wrote someone else, while various commenters tagged Ellen DeGeneres in hopes of getting Berry onto her show.

As for Berry, she left Facebook followers with a pro mom tip: “if you aren’t mentally, emotionally, and physically prepared to roll around in another person’s feces… use a condom. You’re welcome!”

Is My Baby Constipated?