It takes some planning, she says, but it’s worth it.
ByLaurie Ulster
Contributing Writer
PublishedSep 2019 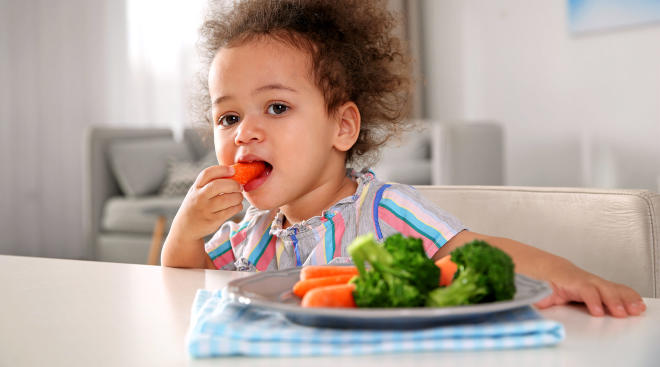 Sarah Horning is the mother of two boys and has a baby on the way, so she knows how real the struggle can be to get kids to eat healthy foods instead of junky snacks—and she’s picked up some wisdom along the way. Harning recently shared her latest hack for making nutritious noshes, and it’s taking the internet by storm.

Horning’s trick? After grocery shopping, the blogger and school administrator washes and preps appropriate “self-serve” snacks—ones her kids can help themselves to at any time of day without asking for help—and puts them in containers on low shelves or in the fridge door where her kids can easily reach them, she explained in her Facebook post. She’s found that leaving foods in their packaging or even leaving grapes on their stems seems to keep the kids away, so she does all the prep in advance.

“My kids will come home from daycare or school and they’re starving,” she told Business Insider. “They melt down, and I’m trying to make dinner, so I would get them home and try to start scrambling to cut up cucumbers and it would be too late. By the time I would actually be able to wash the grapes or whatever it is, they would already be melting down and I’d be throwing Goldfish at them. I realized I need to be ahead of the game.”

Her snack strategy is a double win: Not only do Horning’s kids love being able to grab the ready-to-eat food for themselves, but this way she also has healthy snacks on hand to throw into a packed lunch or offer an option at dinner when her kids don’t like what’s being served. (And yes, she does cover up the fruit & vegetable containers; she just left them open to make a better photo for her post.)

The post quickly went viral, racking up over 55,000 likes, more than 82,000 shares and tens of thousands of comments. Clearly, her solution for the daily snack time battle with her kids is resonating with a lot of parents.

Fellow moms and dads commented that they do the same thing and it works beautifully, while others said they might even try the idea for their big kids, their spouses and themselves to avoid reaching for unhealthy snacks between meals.

“When you are that hungry or that busy, you truly need grab-and-go,” Horning said. “I even saw some people commenting 'I’m 30 and I would still need this to be able to be successful.’ I can’t tell you how much produce we used to waste because I had good intentions and I’d buy it. But ultimately if I don’t wash it and have it ready to go, no one’s going to eat it, including myself. It’s not just for kids, but for everybody.”

Need more healthy snack ideas for your little ones? We have some ideas.