"Picky eating is common during childhood and parents often hear that their children will eventually 'grow out of it.' But that's not always the case.”
ByNehal Aggarwal
Associate Editor
PublishedMay 2020 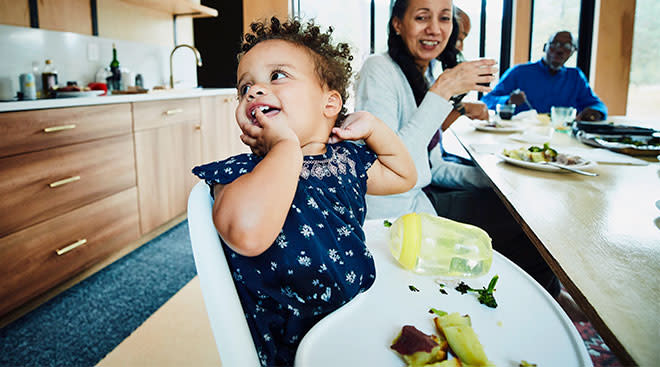 Any parent to a toddler can tell you they can be incredibly picky when mealtime rolls around. While the hope is that kids grow out of their pickiness, one recent study has found that may not always be the case, especially for low-income families. It suggests that children could be established as picky eaters by the time they’re 4 years old.

The study, published in Pediatrics followed 317 mother and child pairs from low-income housing over the course of four years. The families reported on the kids’ eating habits, as well as the mother’s behaviors and attitudes regarding feeding when their kid was 4, 5, 6, 8, and 9.

The study found that the picky eating remained stable from preschool to school-age and that the more the parents tried to control and restrict diet, the more fussy their child became. The researchers believe this indicates that in order for parents’ attempts to expand food preferences to be more effective, they may need to occur in the toddler or preschool years. Researchers also found that the pickiest eaters had a lower body mass index (BMI), but most were still in the healthy weight range and not underweight.

“Picky eating is common during childhood and parents often hear that their children will eventually ‘grow out of it.’ But that’s not always the case,” senior author Megan Pesch, M.D., a developmental behavioral pediatrician at Michigan Medicine C.S. Mott Children’s Hospital, said in a news release. "We still want parents to encourage varied diets at young ages, but our study suggests that they can take a less controlling approach.”

The study also looked at whether characteristics including sex, birth order and socioeconomic status played a role in continual picky eating. The researchers found that the kids who were pickier often had moms who reported more restrictions on unhealthy foods and sweets. "These mothers of picky eaters may be trying to shape their children’s preferences for more palatable and selective diets to be more healthful. But it may not always have the desired effect,” Pesch stated.

However, she added that more research is needed to understand how big a role the controlling feeding behaviors play in the persistence of a child’s picky eating habits.