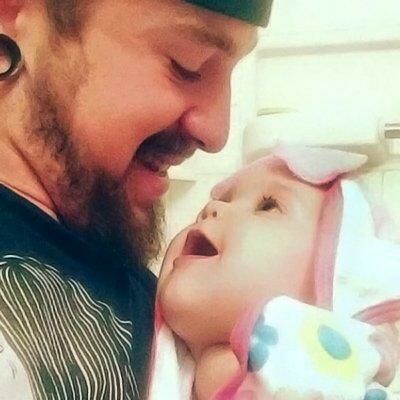 At 21, Richard Johnson is playing a role he never expected: a single dad. He and 10-month-old daughter Persephone have been on their own since the baby’s mother left in February. While Johnson initially thought he couldn’t be a parent, his viral Facebook post has us nominating him for Father of the Year.

In a post on the Life of Dad Facebook page, Johnson credits the stories, support and advice from the online community for helping him through those first few months.

“My name is Richard Johnson, and I’m a single father to a beautiful little girl named Persephone,” he writes. “Her mother left about a month after she was born. We still don’t know exactly why, but we suspect postpartum depression played a part. In the first few weeks of it being just her and me, I stumbled upon your page by accident. I was so nervous and scared about being a father in general, but now I was a single father and had to fulfill two roles. I wasn’t sure I could do it.”

He adds that after reading multiple parenting books and watching hours and hours of YouTube videos, he “started to watch [the] page more closely and saw that there were other fathers out there who were in similar predicaments as me. The page started to turn into a major confidence booster and really helped me through all of this.”

“I always look forward to photo submissions and reading the stories of some of the awesome dads out there in this community. You truly helped my daughter and me through a very difficult time,” Johnson writes. “We’re both very happy now and continue to grow together everyday. She’s now 10 months, and I now get asked by my friends for parenting advice constantly. We’ve come a long way, my daughter and me, and we definitely owe part of that to this page and the people within it. So from both of us, we wanted to thank you.”

With over 15,000 likes and 500 shares, it seems Johnson’s message has struck a chord with parents everywhere.

“That’s awesome Richard! I have a similar story (Mom got back on drugs and left). I’m now a happy, single father to my beautiful 19-month-old daughter Sophia! Life of Dad is a very special page for me. I’m glad to hear you’re story and see you thrive in fatherhood,” one user commented.

“As a fellow single dad, raising my two kids alone (for the most part their mother hardly sees them), I have a great deal of admiration for your success and determination. I laughed at the YouTube comment because that’s how I learned to braid hair for my daughter too! Stay strong and continue to let your heart lead the way. You have a whole community here supporting you. I wish you all the strength you need. Good luck!” says another.

“You truly can’t understand how much everyone’s words mean to me. I am constantly criticizing myself on how I can be a better father and this was just the right medicine I needed,” he says.

Johnson also has no bad blood with the baby’s mother, who initially took Persephone with her when she left.

“She took my little girl to California, but then called a week later and said if I didn’t come get Persephone, she was going to put her up for adoption,” he tells Yahoo Parenting.

He immediately picked up his daughter, and wishes nothing but the best for her mom.

“Her mother is an amazing woman and I will have to ask the few people who had negative things to say about her to please refrain from doing so,” his Facebook post reads. “No matter what she is the mother of my child and I only wish the absolute best for her. So long as she can be happy then that’s all that counts. It’s somethings I wish to instill in my daughter. Postpartum depression is truly a tragic thing and I would not wish that upon my worst enemy.”

All this from a man who thought he never wanted kids.

“I came from a family where everyone is either divorced or a single parent. My father wasn’t in the picture, and I never wanted that for my kids, so I was dead set on not having any,” Johnson tells Yahoo Parenting. But that changed when he met his ex. “We decided that we wanted kids, and I wanted to give them the life I didn’t have.”

Seems like he’s doing a great job so far.