Heading into your pregnancy home stretch? Here’s the latest research on why sleeping on your side really is best.
facebook
twitter
copy link
share
save
ByStephanie Grassullo
Associate Editor
PublishedApr 2019 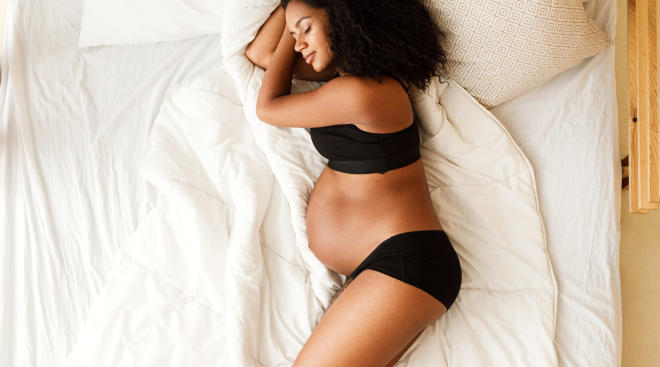 There’s been lots of research to prove why you should avoid sleeping on your back during late pregnancy, and the latest findings on the topic further prove the point. Women cut the risk of stillbirth by more than half when they sleep on their side during the last three months of their pregnancy, according to the New Zealand study.

Combining all the available data on the topic worldwide from five previous studies, the “mega” study provides the strongest evidence for side-sleeping thus far. It includes information from 851 bereaved mothers and 2,257 women with ongoing pregnancies. The resounding conclusion: Sleeping on your side is safest late in pregnancy. Women who still slept on their backs at 28 weeks of pregnancy or later increased the risk of stillbirth by 2.6 times.

One of the reasons for this may be because a supine position (lying on your back) in late pregnancy is associated with reduced blood flow to the womb. A previous study from the University of Auckland suggests a major vessel in a mother’s abdomen is compressed by the pregnant womb when she lays on her back, reducing the flow through the vessel by 80 percent.

The researchers say if every pregnant woman went to sleep lying on her side after 28 weeks—including day-time naps—it could prevent about 6 percent of late stillbirths. That means saving 153,000 babies worldwide each year. The study says either side is okay to sleep on, although experts have previously recommended lying on the left side to allow optimal blood flow to the placenta. And if you wake up on your back in the middle of the night, don’t press panic. Simply roll back on your side and continue with your slumber.

Check out The Bump’s safe sleeping tips for more information on how to sleep comfortably while pregnant.

How to Sleep Safely While Pregnant