Cozy up on the couch with one—or all—of these picks.
Save article
ByNehal Aggarwal
Associate Editor
PublishedMar 2020 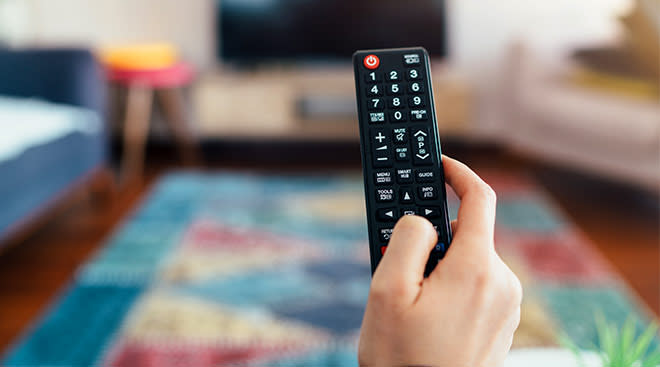 Millions of Americans around the country are adapting to life within the confines of their homes. While staying home can be a nice reprieve every now and then, if you’re doing it day after day, you might find yourself going just a little stir crazy. To help you pass the time—and keep entertained—The Bump editors are sharing their favorite TV shows to binge right now.

Plus, Netflix’s new extension, Netflix Party syncs video playback and adds group chats to your favorite Netflix shows—so it’s easy to watch virtually with friends. Grab your beverage of choice, a blanket and some friends and press play on one (or all) of some of our favorite shows.

The Mentalist on Amazon Prime: Simon Baker, who plays a psychic turned consultant for the California Bureau of Investigation is undoubtedly hilarious in this early 2000s crime show. Plus, it has seven seasons, so it’ll help fill those hours—at least for a little while! (Be warned, like any good crime show, it can be a little dark at times.)

Gilmore Girls on Netflix: In stressful times like these, it can be nice to think back on and escape into happier times. No matter how many times you may have seen Gilmore Girls, there’s something undoubtedly relaxing about grabbing a hot cup of coffee or cocoa and settling on your couch with a cozy blanket to watch life unfold in Stars Hollow.

Love Is Blind on Netflix: If you haven’t already seen it, now’s the time to start. There is nothing quite like watching love blossom in the “pods”—and soon you may even forget all about the world outside them.

Explained on Netflix: Much like what it sounds, this 20 minute show takes topics anywhere from athleisure to diamonds to political correctness and dives into the heart of their meaning, explaining how we got to where we are today.

Grace and Frankie on Netflix”: This show’s about two women in their 70s who find out their husbands—who are business partners—are in love with each other and have been for the past 20 years. It’s heartwarming, while also touching on some heavier topics in a meaningful way.

The Crown on Netflix: If you’ve been waiting to jump on this bandwagon, now is the time! This period piece indulges everyone’s secret fantasies about the Royals, all while portraying them as relatable and undoubtedly human.

Derry Girls on Netflix: This is a dark comedy about a group of high-school aged girls growing up in Ireland during the Troubles of the late 1990s and experiencing the highs and lows that come with being a teenager.

Fleabag on Amazon Prime: This a dry-witted comedy (with some drama) doesn’t disappoint. Plus, we love how the main character often breaks the fourth wall (by talking to the camera while in character). It’s really funny, sad and poignant, all at the same time. Pro tip: you may want to watch this after the kids go to bed, as it contains some sexuality and profane language.

Curb Your Enthusiasm on HBO Now: Seinfeld co-creator Larry David plays a version of himself here—plus, it has a lot of episodes and seasons to keep you busy, including a new one that just came out! If you like Seinfeld, this show will have you laughing out loud.

Schitt’s Creek on Netflix: This sitcom follows a wealthy couple who suddenly find themselves broke and have to give up the life of luxury they know. It’s witty and downright hilarious.

Working Moms on Netflix: The show revolves around four moms who return to work after maternity leave and navigate kids, work and love in modern-day Toronto. Not only is it totally relatable, the quick episodes are easy to get through before bed.

Homeland on Hulu: This drama is now in its eighth season. It follows a CIA officer who suspects a war hero may have been brainwashed. It’s heart wrenching, witty and intriguing, all in one.

The Affair on Hulu: The series follows Noah, a New York City teacher and aspiring novelist who’s married to his wife of 20 years and has four kids, and Alison, a young waitress and wife from Montauk, Long Island. It tells the story of their affair—and the aftermath—from multiple character perspectives.

The Morning Show on Apple TV: This show starring Reese Witherspoon and Jennifer Aniston made headlines when it came out in November. If you haven’t already, now’s a good time to find out what all the hubbub is about!

New Girl on Netflix: Another great show to start watching if you don’t already! This quirky sitcom follows Jessica Day as she rebounds from a breakup and moves in with three single men—all who are eager to help her understand the ways of the world. The best part? All seven seasons are on Netflix!

Pregnant Women Are Being Denied the COVID-19 Vaccine Despite Eligibility

What Every Pregnant Woman Should Know About Coronavirus

The Best Maternity Loungewear to Cozy Up in at Home

Study: COVID-Positive Moms Can Pass Protective Antibodies to Their Newborns

Should Pregnant Women Get the COVID-19 Vaccine?

Where to Find the Best Online Childbirth Classes

How to Host a Social Distancing Baby Shower During COVID-19