Tips for creating an empowering space for your child. 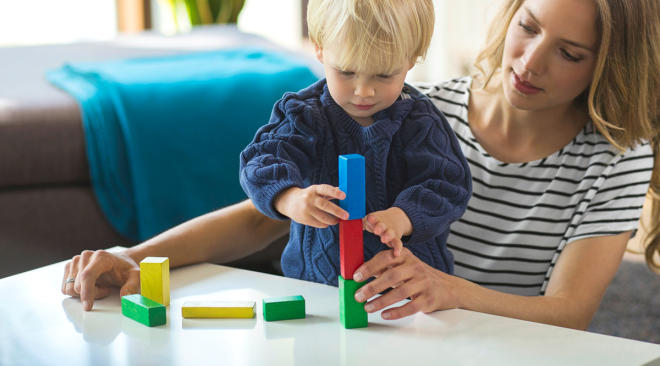 There was a time when I thought I had all the details worked out for my son’s nursery. Then we sold our house and moved across town into a brand new home, putting me back at square one. It was a little daunting at first, but I soon began to realize what a great opportunity I had at my fingertips. Rather than mourning his old nursery, I had the opportunity to create a new room, a room catered to a toddler rather than a newborn.

Of course, a toddler’s needs are much different than an infant’s. I set out looking for some inspiration to help get me started and stumbled across a few Montessori-style toddler rooms. What’s a Montessori bedroom, you ask? It’s a space where everything is within a child’s reach and designed to cater to and foster his personal growth. As Maria Montessori said, “We must give the child an environment that he can utilize by himself: a little washstand of his own, a bureau with drawers he can open, objects of common use that he can operate, a small bed in which he can sleep at night under an attractive blanket he can fold and spread by himself. We must give him an environment in which he can live and play; then we will see him work all day with his hands and wait impatiently to undress himself and lay himself down on his own bed.”

At first I was startled by them, because there was never a crib in sight. But as I learned about the reasoning behind the bed and the rest of the room’s set up, I got on board and knew I wanted to try a Montessori-style room with our son. Check out the photos below to see how it’s turned out (so far) and learn about some of the steps I took to make it happen.

One of the appeals of a Montessori-style bedroom for me was that it encourages simplicity. The room is set up without an excess of toys, bulky furniture and general kid clutter. It’s a simple, straight-forward environment that’s catered just for the child—and I think we all enjoy the de-cluttered space.

One of the major transitions we faced for this Montessori bedroom was removing our son’s crib. Putting the mattress directly on the floor seemed a little nuts at first, but I was shocked at how quickly it started to make sense. He could climb in and out of it within seconds. He even squealed the first time he saw it! It really gives him a sense of independence and an environment that fits his physical stature. Wondering what happens at night? Well, he’s been sleeping on a floor bed for about four months now (since he was 12 months old) and honestly has been doing great! (He usually crawls into bed with us somewhere after 2 a.m., but that’s a discussion for another day.)

Step 3: Keep Everything at Toddler Level

By showcasing one kind of toy on each shelf, my son has lots of choices of what to play with— but not too many. For us, I’ve found that this setup relieves over-stimulation and also makes clean up super-easy. Our son has even started to learn which shelf each toy goes on! I’ve also placed a few baskets of books throughout his room. This gives him easy access to them and lets him pick out his favorites on his own when it’s storytime.

I don’t know about your personal experiences with changing a toddler’s diaper, but I’ve found it’s easiest to do on the floor. No wrestling your child up on a table or wrestling a dirty diaper off and then a new one on. My son actually really like getting changed on the floor and will even help get the pad out when the time comes!

Step 5: Get the Storage Space You Need

We removed a lot of furniture from my son’s room at first, but then realized we were still in need of somewhere to keep his clothes. Currently, the nicer clothing is hanging in his closet, and his play clothes reside in the bottom two drawers of the tall dresser. Once he gets a little older I plan on letting him help pick out his outfits, so having the clothes on the bottom sets us up for that even now.

Step 6: Don't Shy Away From Decoration

I ended up reusing all of the artwork from my son’s nursery at our old house. It saved us a bunch of money and I think it really adds life to the room. Even though he no longer has a crib, I really wanted to include the mobile I made him. Luckily, he’s currently in love with balloons and has a renewed appreciation for his hot air balloon mobile. It melts my heart!

One of the last things I did in my son’s Montessori-style room was to look closely at some of the details I might have otherwise overlooked. A few things that I added included a new light and fun knobs on his dresser that are easy for little hands to grab. I’m surprised at how big of an impact something so little can have on a room!

It must be hard being a little person in an adult world. That’s why I wanted to make sure to include a small work space that was catered to my toddler’s size. By simply adding a small table and chair, he now has a desk to sit at while looking through books.