Here’s how to set up a Montessori-friendly space at home for babies, toddlers and preschoolers.
Save article
ByKatherine Martinelli
UpdatedMar 2020 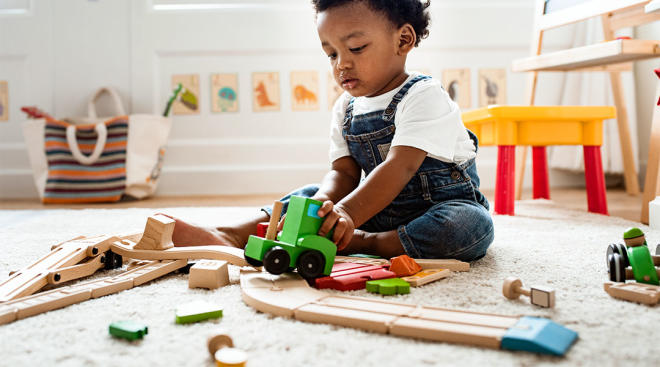 The Montessori philosophy has been around for over a century, but it’s recently seen a resurgence in popularity among American parents, with increased interest in everything from Montessori schools to Montessori toys. Rooted in the concepts of encouraging each child’s independence and creating sensory learning opportunities, it’s a philosophy that easily extends beyond the classroom to be implemented at home. Here’s how.

Montessori is an education method and philosophy that emerged in the early twentieth century from the work of Maria Montessori, an Italian scientist and educator. According to Debra Riordan, executive director of the Association Montessori International / USA, “Montessori is a developmental approach to education that focuses on creating opportunities for children through the balance of freedom and responsibility, and the encouragement of independence and critical and creative thinking.”

So how does all that manifest in a Montessori school? Classes are made up with kids of mixed ages so they can really learn at their own pace, which Riordan says allows for “a confidence interval around learning” where one kid may pick up a particular skill at 3 years old whereas another may get it at 4, and it’s all okay. “Also, children learn that you can be a leader regardless of age when they’re in those mixed age classrooms,” says Riordan.

In Montessori classrooms, children are given the freedom and responsibility of pursuing their own interests, choosing activities and cleaning up after themselves. Riordan notes that when you walk into a Montessori school you may not even notice the adults because they play the role of supporting characters, or guides, rather than a boss.

Wherever possible, things are placed at the child’s level, furniture is sized for them and the toys are simple and self-correcting (Riordan gives the example of a shape sorter, in which each shape will only fit in its matching opening). Wooden toys are popular, as are anything that can offer that sensory learning experience (sensory bins, water stations, etc.). “In a Montessori classroom, the materials are very beautiful,” says Riordan. “Not just because they’re beautiful but also to catch the eye of those little ones. The more you can attract and pull kids to the materials, then the more they want to practice with them and the quicker they come to master concepts.”

Whether your child attends a Montessori school or not, there are plenty of ways to practice Montessori at home. Beyond designing a Montessori bedroom or investing in Montessori baby toys, parents can also adopt the general philosophies of fostering independence, encouraging curiosity and engaging with the world through the five senses.

Parents can start teaching children from a young age to do things like pick out their own clothes, clean up after themselves, feed themselves and generally develop a sense of responsibility and pride in themselves and their environment. Riordan says some of the most important things parents can do at home is to connect with their children through time spent in nature, art, music, reading together, baking and more. “I think it’s really important for you to remember the importance that you yourself play in the development of your child’s future relationships,” she says.

When it comes to creating a physical Montessori space at home, Riordan and Sherwood both recommend getting down on your hands and knees to truly see the environment from your child’s perspective. “If people really want to explore Montessori at home, one of the biggest components of a Montessori home is independence,” says Sherwood. “So really look at the spaces in your home where your child can have the freedom of doing things for themselves.” While some things shift as your child ages, this basic tenet is the same, whether they’re 6 months or 6 years old.

Creating a Montessori Environment for Babies

Children are never too young to start with Montessori. Sherwood says that even when dealing with infants, it’s important to treat them as whole beings from day one. “Maria Montessori talked about the spiritual embryo and how children come into this world knowing and having all of the skills that they need to get their needs met, and also be fully human beings,” she says. “It’s our duty to guide them in shaping the world around them.”

Some things you can do to infuse Montessori at home:

• Place sensory toys within reach. As babies get older, about 6 to 12 months, Sherwood recommends putting Montessori baby toys within reach that they can shake and otherwise experience with their senses (things with different textures, for example).

• Hang a low mirror. Placing a well-secured mirror at their level is great for babies, who get a kick out of seeing their own movements and finally realizing that the image they’re seeing is them.

• Forget the high chair. As soon as your child is comfortable sitting up, it’s time to try to help them sit in a child-sized chair at a child-sized table, says Riordan. They can also practice self-feeding from the time they start solids.

• Emphasize interaction. The best toy for babies is interaction with you and the world around them. This can include listening to music, reading to them or going on walks in nature.

• Put safety first. Especially as babies start to become mobile, you should take the same childproofing steps in a Montessori home as you would anywhere: Anchor all heavy furniture, keep sharp objects out of reach, cover electrical outlets, etc. Use baby gates if that’s what you need to keep your child out of unsafe areas.

Creating a Montessori Environment for Toddlers

Rather than get frustrated with your toddler’s insistence on doing everything themselves, the Montessori method says to lean into that. When practicing Montessori at home, you want to create a space in which everything is within reach so toddlers can become active participants in the home life. All the things that apply to babies apply here as well (except the mobile), which you can start to build on with toddlers.

• Install a Montessori bed. If your child was in a crib, now is the time to transition them to a Montessori floor bed or other low-to-the-ground bed that they can easily get in and out of on their own.

• Have your toddler set the table. Riordan recommends placing plates, child-sized utensils (including knives) and cups at your child’s level so they can reach them and set the table themselves. Sherwood says she prefers to use real glasses “because we want children to understand there is a level of carefulness that you need to present when you have something like that in our hands…if you only have plastic, you’re not exposing them to understanding what can happen when it breaks.”

• Declutter the room. A minimalist space is key for a Montessori home. Sherwood recommends placing maybe three things on a shelf, and having an open place for children to play in. Riordan says a great way to do this is to rotate toys and books rather than having a toy box. Have just a few toys out at a time and store the rest, then every so often switch it up.

• Offer Montessori toys. Take a cue from Montessori classrooms and opt for toys made of natural, Montessori materials (like wood) that are simple but beautiful.

• Hang decorations at your toddler’s level. Riordan points out that even when decorating a child’s room we tend to do so from our perspective. She recommends putting pictures, mirrors and other items down at your child’s level so they can enjoy them and engage with them.

• Use stools to boost your toddler’s independence. A few well-placed stools can help put things within reach for the little people in your home. Most common is a bathroom stool so your toddler can reach the sink themselves, but something like a learning tower in the kitchen is a great option as well.

• Opt for a small potty chair. When the time comes, a child-sized potty that your toddler can get on and off by themselves fits right in with the Montessori philosophy.

Creating a Montessori Environment for Preschoolers and Up

By the time your child is a preschooler (and beyond), they’re more than capable of being independent—and their environment should reflect that. “Three- to six-year-olds are still doing all of the things they were doing when they were younger, but in a more absorbed and concentrated way,” observes Sherwood. So take all the above tips for the younger ages into consideration as you expand your preschooler’s accessibility within the home even further.

• Stick with a Montessori bed. A low-to-the-ground bed is still the best option for preschoolers, though Sherwood says her two kids are in a low Ikea bunk bed to maximize their space.

• Keep clothes accessible. Whether you use drawers, shelves or baskets, your child’s clothing should be kept at their level so they can easily pick out clothes and dress themselves. Sherwood’s kids wear a uniform to school, so she just keeps a basket for each child that they can easily dip into.

• Stock the fridge with your child in mind. Riordan suggests keeping lunch and snack foods on lower shelves of the fridge and pantry so your kids can help themselves.

• Keep screens to a minimum. Maria Montessori didn’t have to worry about kids being inundated with screen time, but it’s certainly something parents have to contend with now. Riordan says that in Montessori classrooms they don’t begin introducing children to screens until the elementary level, and recommends parents do the same.

Debra Riordan is the executive director of the Association Montessori International / USA, a nonprofit organization founded in 1929 by Maria Montessori to ensure that the Montessori philosophy and approach to education would be carried on as she intended. Riordan has a Master’s degree in developmental psychology and received her AMI Elementary diploma from the Montessori Training Center of Minnesota.

Amelia Allen Sherwood, M.Ed., is the dean of social emotional learning at Elm City Montessori, a public Montessori school in New Haven, Connecticut. She has a Bachelor’s of Science degree from Lincoln University in Pennsylvania and an M.Ed. in education leadership from Concordia University in Portland, Oregon.