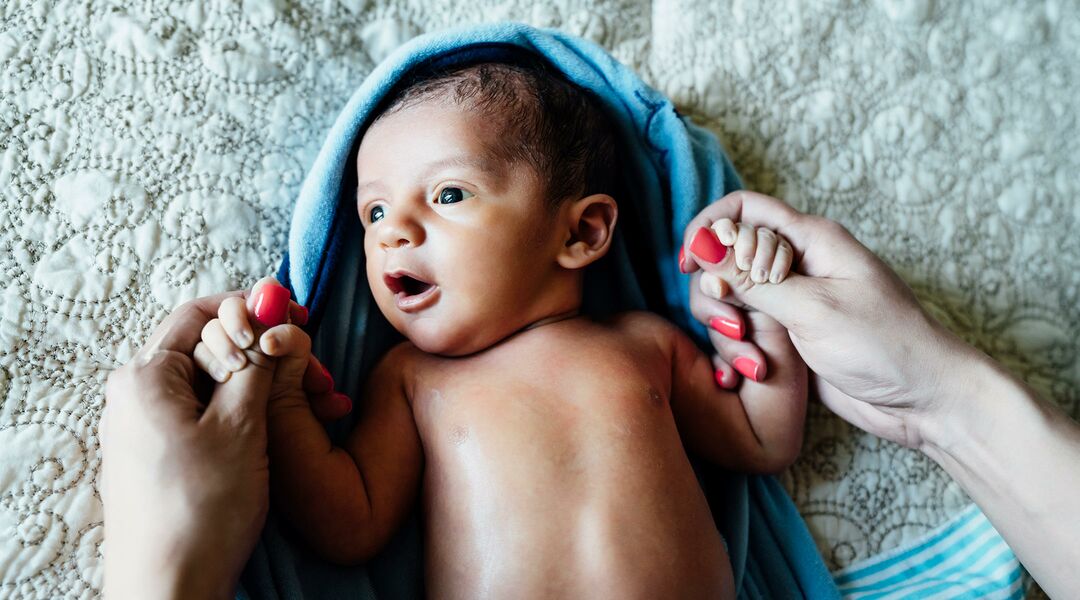 The Bump and Dreft purtouch present Gentle Touch, a sponsored series with tips for treating newborn skin and clothes with tender, loving care. To learn more about why plant-based detergent is a gentle choice, visit Dreft.com

There’s pretty much nothing more aww-inducing than the velvety feel of a baby’s skin—soft, plump and with a magical scent that makes everyone melt with joy. An infant’s skin, however, is still developing throughout the first year of life. “This makes babies more susceptible to damage from the sun, wind, cold and other irritants,” says Estee Williams, MD, a dermatologist in New York City. That doesn’t mean you have to swaddle her in protective Bubble Wrap until she’s in preschool. (Though that would be convenient!) Instead, just follow these simple rules for caring for baby’s delicate skin.

You should always wash baby’s clothes before the first wear, advises the American Academy of Pediatrics. This practice can help remove any potential store- or factory-borne irritants that could bother baby’s skin. But don’t toss those onesies in the machine with any ol’ soap. “Less is more when it comes to baby detergents—less fragrance, less dyes. You’re looking for gentle ingredients here,” says Nanette Silverberg, MD, chief of pediatric dermatology for Mount Sinai Health System in New York City. One to consider: Dreft purtouch HE Liquid laundry detergent, a mild plant-based formula that is hypoallergenic and free from dyes.

Babies don’t really need a daily soak in the tub. “Bathing a few times a week is reasonable,” Silverberg says. (The AAP notes that three baths a week during baby’s first year is plenty.) The reason? More frequent tub-time can break down the skin’s barrier, which dries it out. Other things to watch out for: Too-warm bathwater that can speed up the loss of moisture from the skin’s protective layer and harsh cleansers that may act as irritants. “Use a mild, pH-neutral cleanser in a lukewarm bath,” Williams says.

While a head-to-toe soak doesn’t need to happen on the regular, it’s imperative to always keep baby’s face and skin folds clean and dry from saliva, dribbled milk and the like. “Whenever skin is continuously exposed to any type of moisture, be it milk, sweat, urine, saliva or water, there’s potential to cause redness, chafing and peeling,” Williams says. And sometimes when moisture builds up it attracts yeast (aka candida), which can make an existing rash worse. To keep your drooly baby’s skin healthy, gently pat—not rub—his face and in between those cute, chubby rolls with a soft washcloth when needed, but at least twice daily, recommends Williams.

4. Use the Right Lotion

It’s totally normal for newborns to have peeling, dry skin during the first month. “While their skin can absorb water well, it cannot efficiently hold moisture due to their not-yet-developed skin barrier,” Williams says. After the first several weeks, however, if baby’s skin still looks dry, feel free to slather on the moisturizer. “Creams and lotions are best for warmer climates, and petrolatum-based products and thicker creams are better in cooler temperatures,” Silverberg says. No matter which you opt for, each works best when applied to wet skin, ideally within three minutes of getting out of the bath. If you wait longer, the water will evaporate from baby’s skin, sapping its natural protective oils. (For babies with sensitive skin or eczema, you’ll want to apply moisturizer at least once a day and always after a bath.)

5. Turn on the Humidifier

During chilly winter months, it’s not a bad idea to crank a cool-mist humidifier in the nursery. Most indoor heating systems lower relative humidity, leading to dry inside air that can irritate baby’s skin. “A humidifier, however, can raise the water content in the air, which helps to combat some of the drying effects of indoor heat,” Williams says. Bonus: A nighttime humidifier can also keep a runny nose from drying up and causing discomfort. Just don’t forget to change out the water frequently to avoid mold and bacteria.

Real talk: Baby’s skin often looks pretty darn wrecked in those early days, with up to 20 percent of newborns peppered with neonatal acne. And that’s not the only thing that can muck up her complexion: There are lots of harmless rashes and pimple-like conditions that babies are either born with or develop during their first few weeks, such as miliaria (tiny raised, red bumps with whiteheads); the hive-like erythema toxicum (red blotches with yellowish bumps at the center); and pustular melanosis (brown bumps on baby’s neck, back and limbs). If you get the urge to treat these blemishes, don’t, says Silverberg. That’ll simply irritate baby’s skin more. “But there are similar conditions, like bacterial folliculitis or toddler acne, that can have other consequences,” she says. “In cases of severe or persistent rashes, it’s best to consult with your pediatrician or a pediatric dermatologist.”

“Babies produce less melanin, which leads to more sensitivity to the sun,” Williams says. As such, infants under 6 months should wear hats with an all-around three-inch brim, long sleeves and long pants when out and about. If full-on sun is unavoidable, apply a minimal amount of broad-spectrum zinc oxide or titanium dioxide sunscreen of at least SPF 15 to baby’s face and the back of his hands.