Pregnancy and Birth Traditions Around the World

When it comes to having babies, every culture has its own special customs. Below are some of the most intriguing traditions that have stood the test of time. 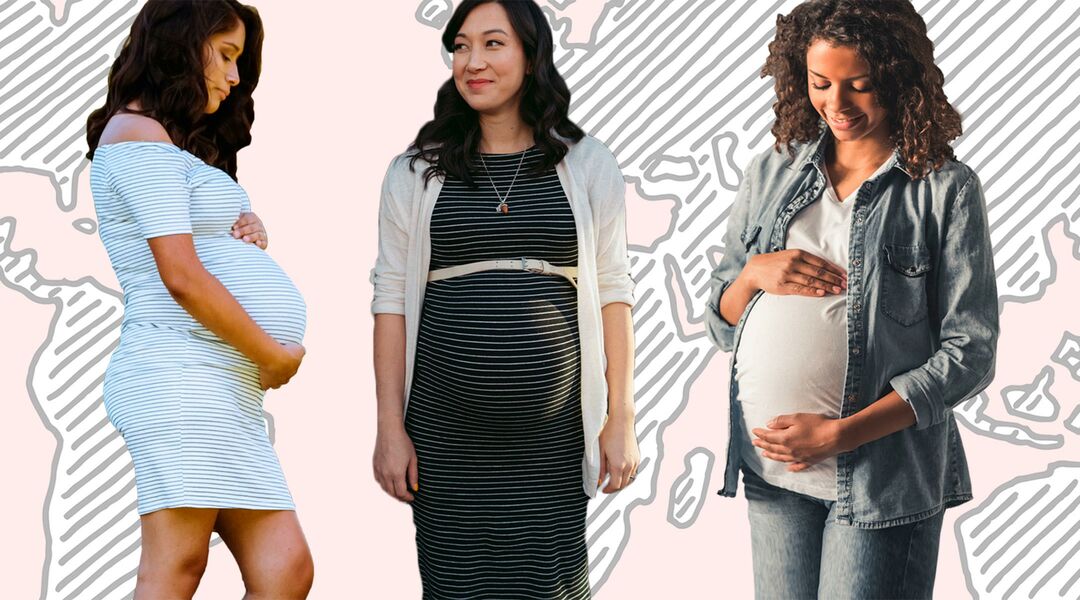 Pregnancy and childbirth may be a universal experience, but each culture celebrates baby’s arrival in its own way. Check out these fascinating, time-honored traditions from every corner of the globe.

To celebrate the new baby and get milk flowing, mothers drink a traditional beverage called lohusa serbeti (“postpartum sherbet”). It’s made with water, sugar, cloves, cinnamon and red food coloring, and is first served to the new mom in the hospital. There are no baby showers in Turkey—celebrations are postponed until after the little one is born. Mom and baby stay home for 20 days after the delivery, and friends stop by and also sip serbeti. Once 20 days have passed, mother and baby visit the homes of gift givers, where they receive a handkerchief filled with candy (for a good-natured baby) and an egg (for a healthy one). Their hosts also rub flour on baby’s eyebrows and hairline to give him a long life.

To help ease them into motherhood, moms observe la cuarentena (“quarantine”)—a 40-day period when they recuperate from labor by abstaining from sex, physical activity and spicy foods. To let them rest and focus on caring for their infant, female relatives and friends pitch in with household responsibilities like cooking, cleaning and taking care of other children. (We could get down with that!) And because the new mother’s body is considered vulnerable, she has to wrap her belly in a cloth girdle or sash called a faja, and keep her head and neck covered as well.

Sorry, Blue Ivy and Apple, but your names wouldn’t fly in Germany. Parents have to stick to a list of accepted names approved by the government when filling out a birth certificate. If the moniker’s not on the list, they have to make a strong case for why the state should make an exception. Names that are objects (like Apple) or surnames are never allowed, and you must be able to tell the baby’s gender by his or her first name. Also off limits: names that can negatively affect baby’s well-being (for example, Apple). If your proposed name is rejected by the Standesamt, the office of vital statistics, you have to submit another one, and pay a fee each time. That explains why conventional names (Marie, Sophia, Maximilian and Alexander are high on the list these days) accounted for 97 percent of baby names last year.

Like Latin America’s cuarentena, mothers here are nurtured with a similar custom called la dieta.” In rural areas, a father gives his wife a shirt that’s damp with his sweat after a hard day’s work while she’s in labor, which folklore says will give her strength. (It’s also common for parents to talk to baby inside mom’s belly and ask her for an easy delivery.) After the birth, mom and baby are carefully shielded from sunlight, even inside the house, where a canopy is hung over the bed. At the end of *la dieta, moms are given a bath with herbs, perfume and a cup of milk or three rose petals to mark their re-entry into the everyday world.

Most Japanese women aim to deliver their baby sans painkillers, an ancient belief that stems from the Buddhist belief that labor pains must be endured as a test to prepare for the difficulties of motherhood. That also means most women won’t even consider an epidural, even if their doctor recommends it. Fathers aren’t allowed in the delivery room unless they’ve taken a prenatal class with the mom. After baby arrives, the new mom traditionally stays at her parents home for at least a month, and rests in bed for 21 days to recuperate and bond with baby, while family members pitch in with chores. During this period, friends visit and eat the celebratory red rice and red bean dish osekihan. And while crying babies aren’t exactly encouraged stateside, it’s the opposite in Japan, where crying contests, nakizumo, are held to see which baby cries first. The Japanese believe that babies who cry loud and often are healthier and will grow much faster.

Birth Traditions in the Dominican Republic

Who needs a sonogram to show whether it’s a boy or girl? Families here still practice a folkloric custom where a spoon, knife and fork are placed under three different chairs, and the mom-to-be chooses one to sit on. The spoon means a girl, the knife a boy and the fork means the gender is undetermined. Another tradition says being pregnant with a boy makes a woman’s hair thick and shiny, while a girl does the opposite.

In this Hindu country, an important birthing tradition is burying the placenta, which is believed to be alive and almost like a twin sibling of the newborn. During the elaborate ceremony, the placenta is cleaned, put in a sealed container, wrapped in white cloth and then buried outside of the home. As for the babies, they’re treated like gods. Seen as divine beings descended from heaven, their feet can’t touch the ground for 210 days. When they finally do, it symbolizes their crossing over to our earthly realm.

Birth Traditions in the Netherlands

Though home births have been trending in the US, Holland takes the cake for the highest number of home births in the Western world. The Dutch embrace natural childbirth, and their medical system reflects that—most expectant moms see a midwife and only visit an ob-gyn for high-risk pregnancies or complications. All pregnant women are required to pick up a kraampakket that includes all of the medical supplies needed for a home birth. To announce baby’s birth, parents place a stuffed stork in a window facing the street so it looks like the stork just flew in make the delivery. When guests visit, the couple serves a traditional snack called *beschuit met muisjes” (“biscuits with mice”). Not to worry—the “mice” are mini licorice pieces covered in pink for girls and blue for boys.

New moms here miss out on a lot of the fun. Instead of being showered with gifts when baby is born, it’s the opposite in Brazil—when guests come to see mother and child in the hospital, she gives them a basket of presents instead. They’re small items like candy and souvenirs, and she includes a note from baby thanking friends and family for visiting. Parents also dress newborns in red, which is considered good luck and keeps evil spirits away.

In this South American country, mothers mark their calendars for the ninth day after baby’s birth—that’s when they celebrate the little one’s arrival with family and friends, who bring sweets and gifts, including money and gold bangle bracelets for baby. It’s also the day when moms take their first post-birth bath. During this celebration, some mothers burn the placenta to symbolize the physical separation of mother and child.

Since the 1930s, new moms in Finland have received the ultimate care package from the state, filled with baby necessities like clothes, diapers, bedding, bibs and a first aid kit, all in a cardboard box that can do double duty as a crib. Mothers have the option to take a cash grant instead, but the majority opt for the starter kit, which is worth a lot more. Originally created for low-income families to give all babies an equal start in life, Finland’s freebie package became available to all moms in 1949. The government’s plan seems to be working, since the country has one of the lowest infant mortality rates in the world.

Babies here receive a bundle of blessings. On the seventh day for a Yoruba girl and the ninth day for a boy, they’re given water (to have no enemies), palm oil (for a smooth, stress-free life), kola nut (for a long and healthy one) and salt and pepper (to keep things exciting and spicy). Postpartum care is called omugwo, a key component of which is baby’s first bath, given to him by his grandmother (or, if she’s unavailable, an aunt or close friend). This first washing symbolizes that the mother isn’t alone is raising her child, and that the community will always be there to help her. The grandmother’s other job is to help mom get back into pre-pregnancy shape with a routine that includes a belly-flattening massage with a towel dipped in hot water.