Here, a mom of three young Black boys opens up about what the popular hashtag #BlackBoyJoy means to her. 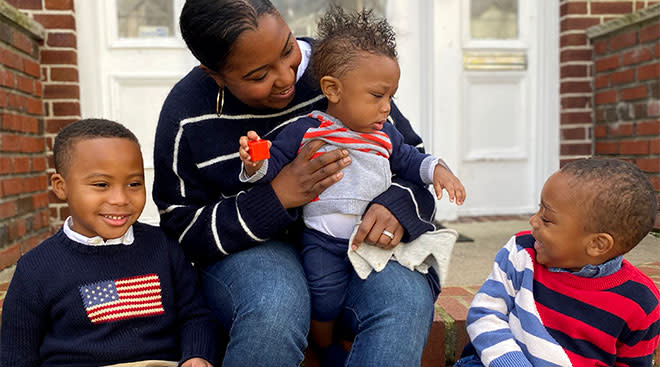 Scrolling through your social feed, you’ve likely come across #BlackBoyJoy tagged on images featuring Black “boys” that fall along the age spectrum from babies to adult men. The hashtag may touch you, or it might make you question “why should we only care about Black boy joy?” It goes without saying that every parent wants their child to feel joy whether they’re black, brown, white or anything in between. But there’s a reason the popular hashtag has been used over 1.4 million times on Instagram.

The truth is that every time a Black boy is brought into this world, his joy is at risk from day one. I’m a mother of three Black boys, ages 1, 3 and 6 years old. My beautiful boys are joyful. They love Paw Patrol, all things dinosaurs and negotiating over fruit snacks. They are mostly unbothered by the realities of this world, but I can already see some of that ignorant bliss starting to fade in my oldest son, Clyde IV. After watching the nightly news, I get questions like “Mommy, why don’t they like Black people?” and “I thought the police were the good guys?” Handling these tough but important questions requires delicacy, nuance and the ability to break down the most complicated subjects in the simplest terms. But I can’t run away from these questions because as much as I want to raise protected, joyful kids, I also want to raise informed and empowered humans. In fact, my hope is that every family can find a way to tackle the tricky stuff, because that is how we set the stage for growth and the ability to recognize right from wrong. 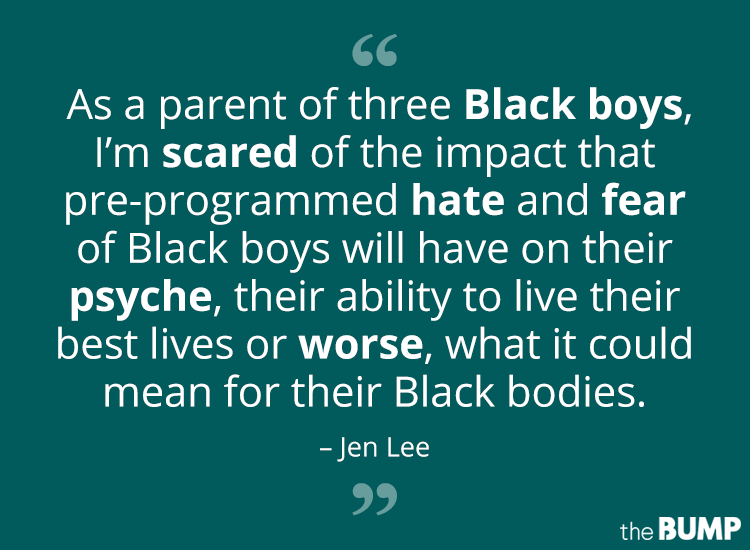 The weight of being a Black boy and a parent of a Black boy is immense. If Black boys can be feared and falsely accused because they choose to wear a hoodie like 17 year old Trayvon Martin, play with a toy gun like 12 year old Tamir Rice or jog through a neighborhood like 25 year old Ahmaud Arbery, that means their very existence, their place in this world, is always on trial. Can you imagine walking through life 24/7 with the burden of proving that you’re a good person? Constantly on alert about how you’re being perceived and striving to make others comfortable? Assumed guilty until proven innocent? That is the oppression that Black people, particularly Black boys, have to live with every day. 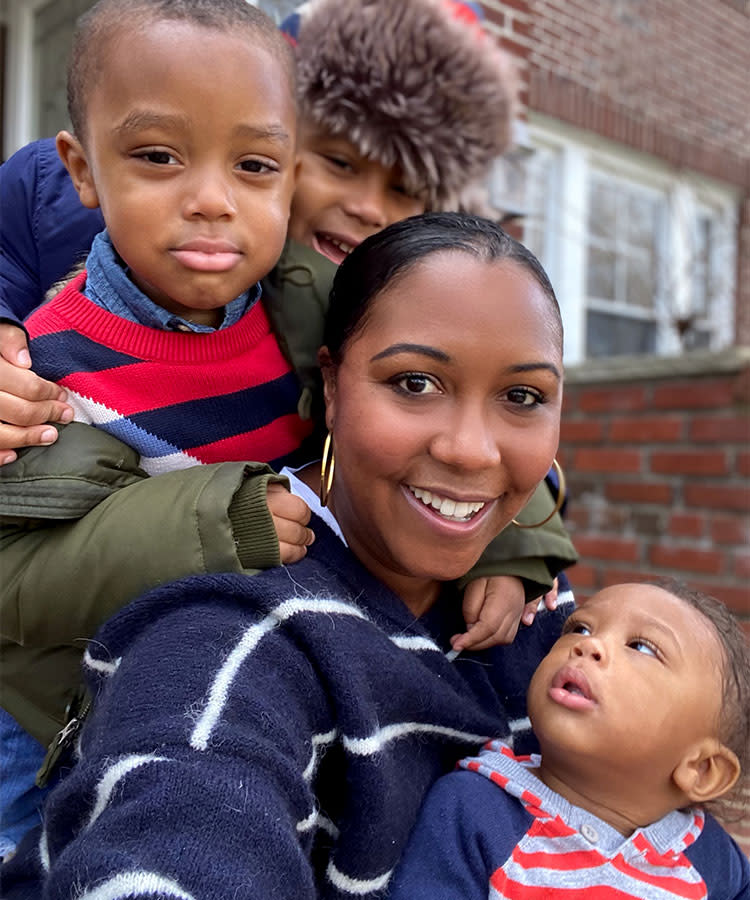 As a parent of three Black boys, I’m scared of the impact that pre-programmed hate and fear of Black boys will have on their psyche, their ability to live their best lives or worse, what it could mean for their Black bodies. In some elite Black circles, parents have implemented dress codes as a safety mechanism. “If you must wear a T-shirt to an outdoor play event…it should have the name of a respected and recognizable school emblazoned on its front.” Will a Princeton T-shirt save my son’s life? As ridiculous as that sounds, it illustrates the desperation and anxiety that Black parents have about their children making it home as a result of someone else’s hate or misconceptions.

Back to #BlackBoyJoy. The hashtag is not a put-down of anyone else’s joy. The more joy the better! #BlackBoyJoy was created to show positive images of happy Black boys to reinforce confidence, release some of the emotional baggage and reaffirm the existence of and right for Black boys to be happy. #BlackBoyJoy helps to debunk the stereotypes that some people hold and the media sometimes portrays about who Black boys and men are—a menacing threat. Thus, a #BlackBoyJoy hashtag or a book like I Am Every Good Thing by Derrick Barnes are meaningful tools to reshape the narrative and reinforce that Black boys have worth and are worthy of being happy. 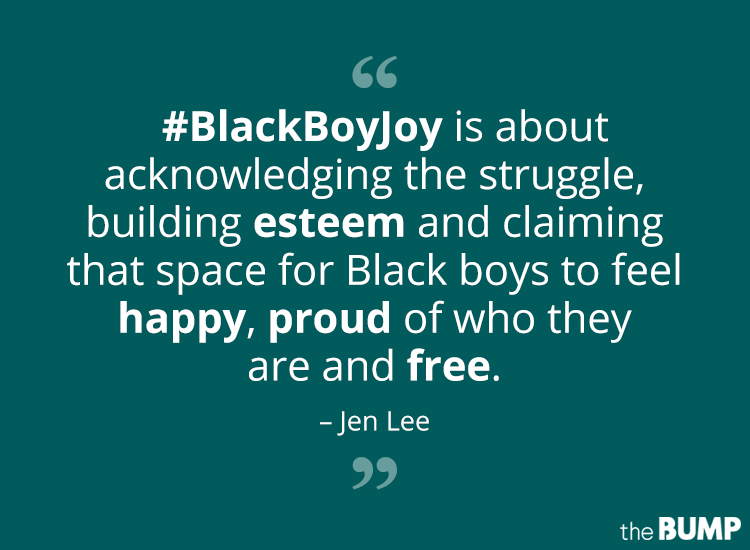 If you’re raising Black boys who will grow to be Black teenagers and eventually Black men, you know the path is different. Families, schools and the communities rearing Black boys play an important role in shepherding that joy and creating an environment where these young men feel safe enough to develop a positive identity for themselves. If you aren’t personally raising Black boys, you can still play an important role by building a more inclusive environment in your own community. This could range from extending an invite to a socially distanced play date to a gesture as simple as sharing knowledge about a weekly read-a-long at your local library. A fundamental action that you can take to expand your little one’s mind from the beginning is adding books like The Colors of Us by Karen Katz to your reading list. If your household, neighborhood or town aren’t particularly diverse, you can start by sharing stories that humanize the Black experience and ignite compassion. 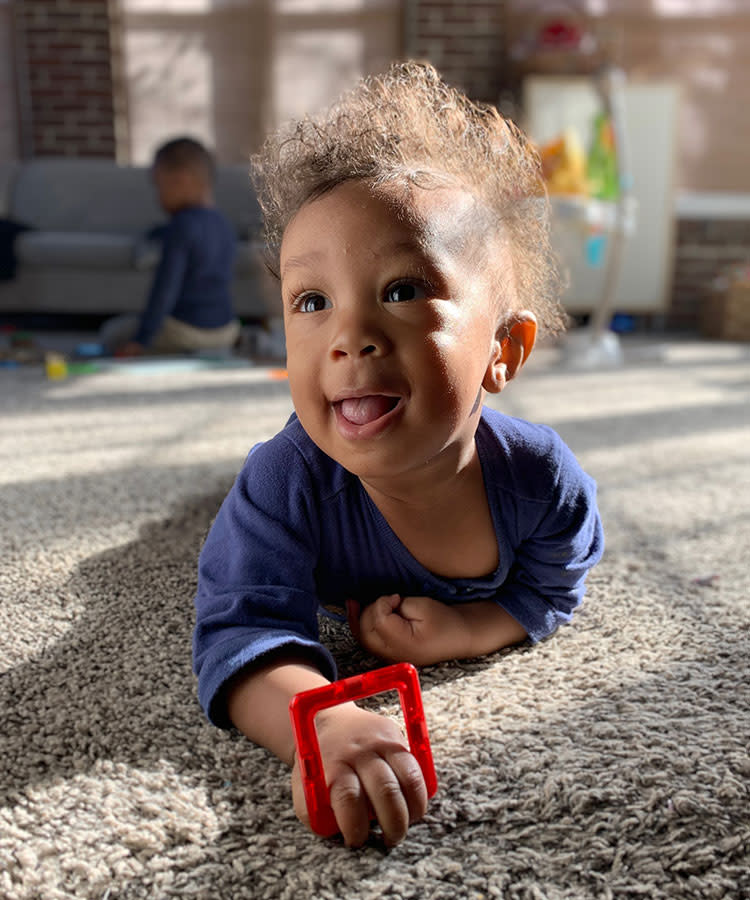 #BlackBoyJoy is about acknowledging the struggle, building esteem and claiming that space for Black boys to feel happy, proud of who they are and free. And with all of the hardships the pandemic and quarantine life have brought forth, I also try to embrace the joy of parenting. That means I’ll shut down Zoom a little early to play “the floor is lava” or listen to the Hamilton soundtrack for the 1500th time if it makes my boys feel more seen and loved in that moment. It’s my goal to honor #BlackBoyJoy everyday and nurture the possibilities of who they will become and how far they will go.

How to Talk to Your Kids About Race and Racism