Everything You Need to Know About Breastfeeding in Public

Breastfeeding in public can be a bit nerve-racking. Learn your legal rights and get tips for how to breastfeed in public comfortably. 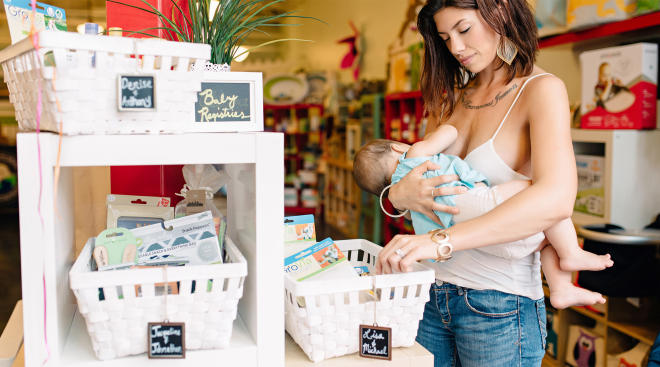 Women have been nursing their babies since the dawn of time, so you’d think by now it would be a nonissue. But take that totally natural behavior and put it on a park bench or in a restaurant booth, and suddenly public breastfeeding sparks a debate. One look at some recent news stories about breastfeeding bullies (whether it’s a store employee, a woman’s own parents or even an officer of the law) and it’s clear there’s still work to be done.

So what gives? Why is there still so much controversy over breastfeeding in public? The contention lies with the fact that some people simply aren’t comfortable with public breastfeeding. Maybe they’ve never been around a relative or a friend who has breastfed, or maybe they consider breasts to be sexual objects and women’s bodies make them nervous, says Kelley Kitley, LCSW, a psychotherapist who specializes in postpartum issues.

Of course, as with many hot-button topics, attitudes about breastfeeding in public can differ widely by region. In more liberal places, moms freely breastfeed their babies and no one cares, while in other parts of the country, people are more conservative. How open—and informed—people are about public breastfeeding varies. “People get offended by things they don’t understand,” says Michele Dwyer, RN, International Board Certified Lactation Consultant (IBCLC) at St. Joseph’s Hospital Health Center in Syracuse, New York. “The mom is sustaining life for baby. If people could accept that breastfeeding is part of a natural union between a mother and her child, the controversy surrounding breastfeeding in public would end.”

The bottom line is this: Breastfeeding is normal. Breastfeeding is healthy. (The American Academy of Pediatrics says breastfeeding is the best source of baby’s nutrition for the first year of life.) If you’re out and about and need to feed baby, you should absolutely feel free to nurse in public.

Is Breastfeeding in Public Legal?

Tips for Breastfeeding in Public

For many moms, breastfeeding in public takes some getting used to, while others are at ease with it from day one. Some women feel more comfortable covering up while breastfeeding in public, but you should never feel like you’re obligated to. However you feel about nursing around other people, here are some tips for making the process go more smoothly—and how to breastfeed in public more discreetly if that’s your preference.

• Dress for breastfeeding success. When it comes to making breastfeeding in public less stressful, the clothing you choose is key. Start with a great nursing bra with panels that are easy to unfasten and refasten and a nursing tank or top that also provides quick and easy access.

• Try out breastfeeding covers. Some women prefer to be very discreet about nursing. If you’re looking for a cover-up for breastfeeding in public, try Udder Covers ($35, Uddercovers.com). These nursing covers come in lots of fun patterns and have a flexible but rigid neckline that bows to allow for good ventilation and let you make eye contact with baby while you breastfeed. Another great option is the Oslo Nursing Cover by Dria ($80, Driacover.com), which is made from super-soft jersey fabric that drapes over you like a poncho and doubles as a canopy for your stroller or car seat.

• Opt for breastfeeding scarves and shawls. Scarves and shawls still give you a good amount of coverage but tend to be lighter and less obvious-looking than straight-up covers. Plus, they double as a fun fashion statement, especially if you go for a trendy infinity design, like the Itzy Ritzy Nursing Happens Infinity Breastfeeding Scarf ($25, ItzyRitzy.com). You can double-loop it around your neck or wear it as a capelet, then simply unwrap the fabric and drape it over one shoulder when it’s time to start breastfeeding in public.

• Go for baby wraps and slings. Babywearing is a great solution for discreet breastfeeding in public. With a baby wrap or a sling you can keep baby close, cover things up and take a walk or get chores done at the same time—it’s a multitasker’s dream! We like the Moby Wrap ($45, Amazon.com) or the Infantino Sash Mei Tai ($23, Amazon.com).

• Button-down shirts are your friend. Try a simple button-down shirt that you already own (one in a slightly larger size is probably best), and simply unbutton as needed. Also try layers, like a nursing tank top with a cardigan sweater, for more coverage when public breastfeeding.

• Practice makes perfect. Test out different nursing bras, tank tops, shirts and nursing covers to find what works best for you. It’s a good idea to try them on in front of a mirror to make sure you feel comfortable with the amount of skin that’s exposed. Then how you cover up—or not—while breastfeeding in public is up to you.

• Find safety—and power—in numbers. Whether you’re trying out a SoulCycle class or karaoke, it always helps to have a friendly face come along when you test out something new. Same goes for public breastfeeding. “I recommend for moms to initially nurse in groups, so they feel empowered by one another and learn to feel comfortable,” says Leigh Anne O’Connor, IBCLC, a lactation consultant and a parenting expert in New York. So grab a fellow mom friend and practice breastfeeding in public together, or just bring a supportive pal who can encourage you—and shield you if you’d like—as you find your way.

• Position baby for privacy. There’s nothing wrong with facing a roomful of people while breastfeeding in public, but if it makes you feel more comfortable, position yourself to face away from the crowd, or go to the back of the restaurant or room. Some public places—especially malls and airports—have public breastfeeding lounges or nursing pods like the Mamava, so check online or call before you go. For extra discretion, you can also place a stroller or a shopping cart in front of you. Many stores, like Target, also let customers breastfeed in the dressing rooms—even if others are waiting. So never feel like a bathroom stall is your only option.

• Prepare for naysayers. Most women are able to breastfeed in public without being hassled. But if you continue to nurse in a variety of places, at some point you may find yourself faced with some unsolicited commentary about where and how you choose to feed baby. The best way to deal with people who are anti breastfeeding in public? It’s all about being prepared. “Have a straightforward answer ready in advance, so you’re not caught off guard if does happen,” Kitley says. You might say, “I’m sorry if it makes you uncomfortable, but I need to feed my baby.” You can also calmly explain that you hear that person’s opinion, but that you have a different viewpoint and it’s best if they walk away. Then leave it at that and go about your business. If you feel threatened, contact the establishment where you tried to breastfeed; they likely don’t want customers to have bad a experience, and they especially want to avoid the bad press that could potentially ensue.

Personal Stories of Breastfeeding in Public

Looking for some breastfeeding in public testimonials before you actually give it a go? As you’d probably expect, experiences run the gamut. From unexpected support to unfiltered criticism, moms have seen it all. And they share their stories to remind other moms that no matter what roadblocks you face, it’s your right to breastfeed wherever, whenever baby’s hungry.

Encouragement from a waitress

Whether you’re nursing or not, taking baby to a restaurant is rarely smooth sailing. But Isabelle Ames had an unusually positive experience thanks to some kind words from her server.

“While at breakfast this morning I was doing my usual thing—trying to wrangle a very active 10-month-old while trying get at least one sip of my coffee,” Ames wrote on Instagram. “When Charlotte got hungry, I started breastfeeding her. It went okay, but lately it’s been extra difficult. She has a total of six teeth now, and we have both been sick for a week. When she finished, my server came over and said, ‘This pancake is from me to you. Here’s a little note to explain why.’ She then began to tell me how ‘us mommas gotta look out for each other.’”

Discouragement from a parenting class

Just as you might receive some unexpected support for breastfeeding in public, setbacks can come when you least expect them. Australian mom Renae Rutherford says while attending a parenting seminar at her local college, an older gentleman on the events team “aggressively” reprimanded her when she started breastfeeding her 3-month-old son.

“He started lecturing me about their policy and how breastfeeding in the theatre was a hygiene issue,” she tells Perth Now. “I said I was disappointed and embarrassed for the school and he sort of scoffed at me and said, ‘Why would the school be embarrassed?’ He was just rude. He got me angry because he really belittled me.”

Ultimately, the school, All Saints’ College, apologized to Rutherford and emphasized this take on breastfeeding in public is actually not their policy.

Comments on La Leche League’s Facebook page serve as a reminder that breastfeeding in public isn’t always something moms carefully deliberate over; sometimes, it’s just necessary. And diving right in is a great way to get past any reservations.

“With my first daughter, I covered up or went to another room to feed her. It was miserable; the cover only makes you hotter,” one comment reads. “This time around, with my son, I started out with a cover. But he sweats a lot. I decided I needed to make us comfortable and not worry about anyone else and whether they’d feel weird.”

“I’m a very modest and sometimes even shy person. But the desire to feed my babies overcame my modesty,” another comment says. “I used a cover when I was able to, but a few of my toddlers wouldn’t allow a cover and I just got over it. I would think of quick comebacks in case anyone said something. They never did—and I felt empowered.”

When Avery Lane was breastfeeding at an H&R Block on a military base in Georgia, the manager asked if she could cover up with a towel. Without missing a beat, she fired back, “No, but I have a muslin if you would like to cover your face. You must not know Georgia’s breastfeeding in public laws.” Knowing your rights can help you stand up for yourself more confidently. Lane was in the right—and the military police she called ended up backing her up.

Ultimately, how, when and where you choose to breastfeed baby is your business. But if you decide that breastfeeding in public is for you, know that it’s your legal right to do so. Ignore those haters, stay connected to the people who give you the most support, and reach out to a certified lactation consultant if you aren’t getting the support you need. Whether you’re breastfeeding in public or at home, you’re creating a healthy and special bond with your child, and no one has the right to take that away from you.