I know baby's supposed to get up often to feed in the beginning, but how can I set her up to start sleeping longer stretches when she's ready? 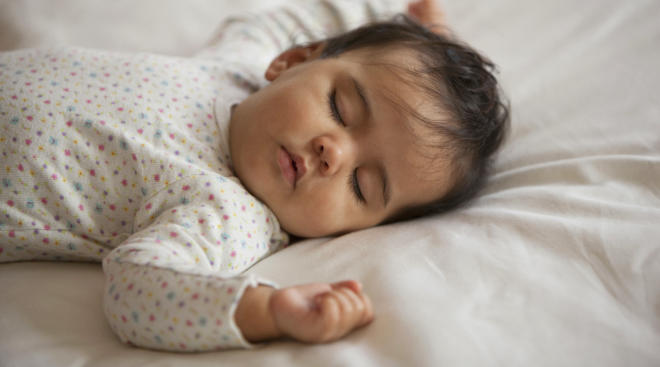 Every baby is different, but there are definitely some ways to maximize your chances of catching some z’s. Give yourself and baby some much-needed snoozetime with these easy tips.

Clear the Clutter
Make sure the nursery is designated as a room for sleep. Keep the area around the crib free of toys and other fun knickknacks. “Crib distractions confuse your baby,” says Conner Herman, coauthor of The Dream Sleeper: A Three-Part Plan for Getting Your Baby to Love Sleep. “They’ll make him wonder, ‘Is this a playpen, or is it time to sleep?’” Clearing the space will help your baby mentally associate the bedroom with sleeping and other rooms with playing.

Start Separating
Though it may go against your natural instinct, Kira Ryan, Herman’s coauthor and business partner, recommends putting baby in her own room for at least one nap a day from the start. “This gets her acclimated to her room, so when it’s time to move in there, it’s not a total change.” A daily solo nap also helps baby and you get used to being apart — these little breaks may be tough, but they’re healthy and necessary. Even if baby sleeps in your room, Herman recommends putting up a screen or partition for a little separation. “If baby wakes up during the night and sees you, it’s easy for him to rely on you to fall back asleep.” And you’ll all be happy later if baby’s able to put himself back to bed.

Stay Cool
Baby sleeps best when the temperature is consistent and cool. “Most moms actually keep the nursery too warm,” says Ryan. Try to keep the room temperature between 68 and 72 degrees. Putting your crib in the right spot is also essential. “Pick a location that isn’t in the direct pathway of your air conditioning or heating vents,” says Herman. Sudden temperature changes can startle and disturb baby. Also, keep the crib away from windows to protect baby from drafts and outside noise.

Dim the Lights
Forget the nightlights — babies aren’t likely to fear the dark until at least 18 months. In fact, cut out all the extra light you can, since light signals daytime to baby. “On a scale of one to five, five being pitch black, your baby’s room should be a four,” says Herman. Get yourself an extra hour of sleep by putting vinyl blackout curtains behind decorative drapes. Also, scan the room for anything shiny. A clock, baby monitor, or flashy toy could catch baby’s eye and wake him up, so cover these objects or turn them around. If baby’s a nighttime nurser, attach a dimmer switch to a lamp and turn it on and off slowly for nighttime feedings.

Soothe with Sound
What baby hears (or doesn’t) is just as important as what she does or doesn’t see. Pick up a white noise machine to cancel out house noise, cars, and other distracting sounds (just don’t turn it so high it could hurt baby’s sensitive ears). Baby will begin to associate the constant and consistent sound with sleep. Some noise machines have lullaby, ocean, or other sound options, but simple white noise is fine — it’ll bring baby back to being in the womb, and really, what’s more soothing than memories of mommy’s belly? Look for a portable machine so you’ll be able to recreate the sounds of the nursery while you’re away from home.