Thinking about putting baby on a schedule? Before you do anything, read this.
Save article
ByElena Donovan Mauer
UpdatedFeb 2020 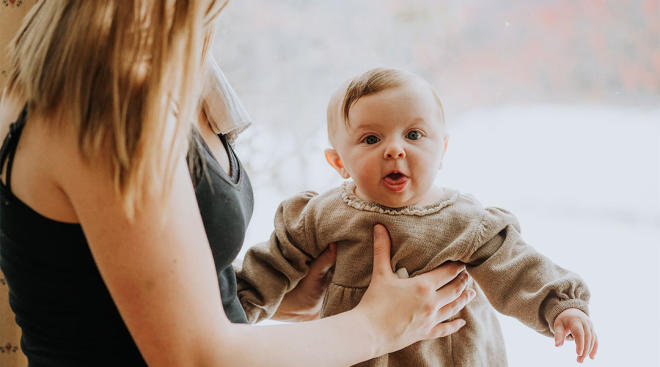 So you’re interested in baby schedules. Well, you’re on the right track. After all, getting into a groove—you know, a rhythm of events that happen each day at around the same time—can be good for you and baby. “Babies come into the world as a blank slate, and they depend on you to teach them routine,” says Nina Vaid Raoji, RN, MSN, APN, author of Raising Baby: A Pocket Guide to Baby’s First Year. “When the same thing is done at approximately the same time interval, baby quickly learns the sequence and will anticipate the next step.” The sense of familiarity that results from a schedule can be a big comfort to baby. Plus, getting into a daily routine can help you stay sane. “Once baby adapts to the set schedule, you can make plans accordingly knowing that during certain times baby will be sleeping or will need to eat,” Raoji says. So when’s the right time to establish those baby schedules? And how should you go about it? Read on for answers.

Forget expecting morning feedings to start at 6:00 a.m. on the dot every day, or for baby to go down for his morning naps at exactly 9:00 a.m. Baby can’t tell time—and you’re not a drill sergeant. Babies will be hungry when they’re hungry and sleepy when they’re sleepy. The keys to getting a schedule down pat is responding to baby’s existing cues, taking into account the loose routine he’s already keeping, making it work with your day-to-day and establishing it a little more definitively.

For example, maybe you’re finding that baby is hungry after naptime and then seems energetic afterwards. In that case, a “sleep, eat, play” routine could work for your family. Some days, baby will wake up a little earlier than other days, or her feeding will last a little longer, but generally you and baby hold the same sort of pattern and timing from one day to the next. You can call that a solid baby schedule.

When to Set Baby Schedules

If you’ve got a 2-week-old, forget baby schedules and just go with the flow for now. Babies get into rhythms starting around 3 months of age, says Cheryl Wu, MD, a pediatrician at LaGuardia Place Pediatrics in New York City. “At 3 months, you’ll notice that baby has some sort of pattern throughout the day,” Wu says. “Usually around 6 months, they’ll get into a rhythm for nighttime sleep, sleeping about 12 hours at night and waking up two or three times throughout the night. A daytime schedule emerges for most babies around 9 months of age.”

How to Create Baby Schedules That Work

“Ask yourself, ‘Do I have a baby that will respond to a schedule, or not,’” she suggests. You might love the idea of a baby schedule, but if your child’s not having it, it might just stress both of you out trying to create one.

And remember, getting baby on a schedule means tweaking the routine a little—maybe you extend the time before a bottle or move up bedtime in 10-minute increments here and there. But you don’t want to starve a hungry baby or keep a sleepy baby up so late that he gets overtired. (Believe us, you’ll be sorry you did.)

Your baby’s personality will also clue you in on whether to implement a baby-led routine or a parent-led one. “Baby-led schedules mean that parents follow the baby’s cues for feeding, sleeping and play,” Raoji says. “Parent-led schedules require ‘training’ baby to feed at certain times, sleep at certain times and play in between as desired.” Baby-led routines tend to be easier on baby and easier to make happen— you’ll just have to make room for more flexibility from day to day.

So how can you figure out what baby’s natural routine looks like? Keeping a log of baby’s day-to-day every day for months is simply not realistic (and will make you completely insane!), but in the beginning, when you’re developing your baby schedule, it’s helpful to write down when your child sleeps, eats and plays. That way you can pinpoint patterns in his day and plan his schedule around him. “You also want to make sure baby’s feeding and peeing and pooping enough,” Raoji says. “After the first couple weeks, I would recommend logging feed and sleep times every month or two for a few days just to see if baby’s schedule is still the same or changing.”

And if you’re totally stumped about what baby’s schedule should be, or how to get her there, you can bring your notes to baby’s pediatrician for some help. “I can usually see a pattern,” Wu says. “If you’re at your wit’s end, bring the information to a person who’s not as affected by how your child is sleeping as you are.” Together, you and the doctor can come up with a plan to create a schedule that will work for both you and baby.

As baby gets older, she’ll get used to the routine and better stick to it. And she’ll probably become more adaptable, so you’ll be able to tweak it a bit—maybe even skip that late afternoon nap and head to the park once in a while.

But, we hate to break it to you, just when you two seem to have the whole baby schedule thing nailed down, your kid might make a big change. “At times, you may feel like you have taken a few steps backwards, like during baby growth spurts or if baby is sick,” Raoji says. Baby might decide she’s done with that late afternoon nap, and there might not be anything you can do about it. That’s okay, but you might have to start putting her to bed earlier at night. Just consider this baby’s next phase and see this as a new, slightly different routine.

• Keeping baby up too long. “If baby’s under 6 months old, within two hours of waking, she should be asleep again,” Wu says. “Some parents don’t realize when their baby’s overtired. They may show it if they seem to have gotten enough sleep but are cranky when awake.”

• Going against baby’s natural rhythm. “Say a kid is very irregular and mom tries to put him on a very regular schedule. It’s just not going to work,” Wu says. “Some babies will be fine, but others have a stress reaction and the routine gets completely screwed up. You may have to use some trial and error to see what works for your child.”

• Pulling a sudden switcheroo. “Slight changes in routine won’t affect baby too much,” Raoji says. “But a big change in schedule like a missed nap or a delayed feeding may leave you with a really cranky kid. When it comes to baby schedules, your child has learned to anticipate the next step, and when that routine gets messed up, they can become very irritable.”

Real Baby Schedules From Other Moms

It can also help to get the perspective of other parents going through the same things as you. Have mom friends with babies the same age as yours? Ask them what kind of baby schedules their children keep. Or go on The Bump message boards to make new pals.

Curious to see some sample baby schedules? See below for routines that other families have found work for them, broken down by different age groups:

10-Minute Workouts To Do While Baby Naps