How Early Can You Sleep Train? 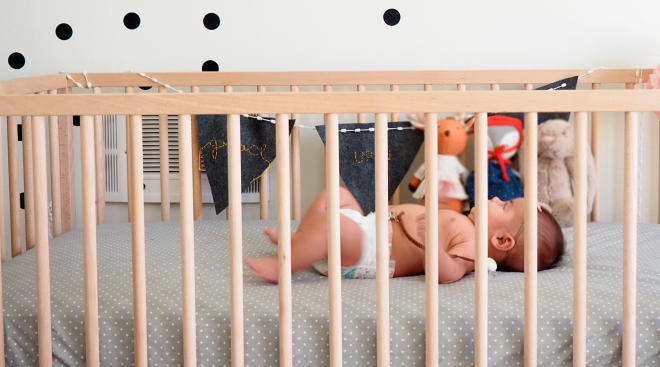 It’s a hot topic, it’s a pressing question, and it doesn’t have a clear-cut answer: When should you start sleep training?

Some experts say sleep training can begin as early as birth. But it depends on the method. Experts like Richard Ferber of the Ferberization (cry-it-out) method recommend waiting until six months. The latest benchmark? Eight weeks. This one’s drawing mixed reviews from parents.

"I was surprised to hear it suggested at 8 weeks. Was it really O.K. to try cry-it-out on such a tiny, hungry, helpless little creature?’’ writes Aimee Molloy for The New York Times.

Molloy explains the recommendation of her pediatrician at Tribeca Pediatrics, who was less-than-impressed that her two-month-old was logging between six and eight hours of sleep per night:

“Place all 12 hungry, needy pounds of our daughter in her crib at 7 p.m. Close the door and return at 7 a.m. No checking, no consoling and definitely no feeding. She would cry — for hours, possibly — but in about three nights she’d get the picture that nobody was coming to her rescue and would begin to sleep through the night.”

For some, this does the trick. For others, not so much. The founder of this method, Dr. Michel Cohen, has this to say: "Do you have the guts to do what I’m suggesting? If so, you’ll see it works.”

Molloy admits she didn’t have the guts. The crying was too guilt-inducing, although it likely didn’t compare to the distress caused by Cohen’s previous recommendation of sleep training at one month.

“Parents were too emotional. Nobody was quite ready," he says.

As seen on our community boards, early sleep training is controversial, and not something many Bumpies are trying. The majority indicate they wouldn’t suggest sleep training until three or four months, but there’s a few early-intervention believers:

“We started Baby Whisperer at eight weeks and although every night isn’t perfect, it is a lot better. I would recommend the book The Baby Whisperer Solves All Your Problems.”

“Noah is six weeks old, and we are already doing what we can to establish a nighttime routine, even though it varies from night to night based on how he’s feeling, honestly. When he first came home, he wouldn’t really go to bed before 11 or 11:30, but now we’ve got that backed up to 10/10:30.”

“From six weeks on, waking in the middle of the night was met with food, and nothing else. No play time, nothing fancy, just eat if you must then back to sleep.”