What to Do When Your Toddler Is Sick

From coughs and colds to fevers and rashes, here’s how to help your sick kid feel better fast—and when to call the doctor. 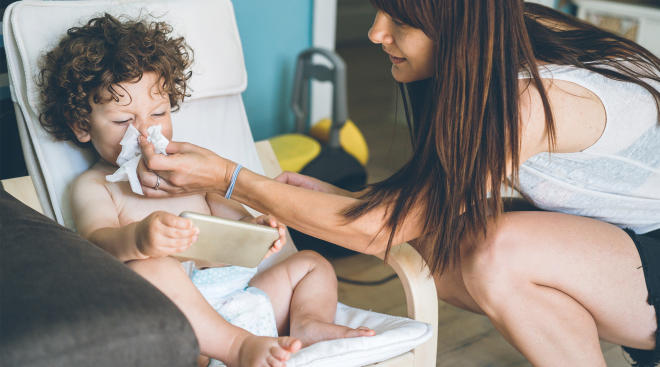 No one ever wants their toddler to be sick, but unfortunately helping your child through an illness is part of parenting. Fever, diarrhea, vomiting, constipation—the odds are pretty high you’re going to go through all of it during the toddler years. Here’s what you need to know about tackling these common illnesses at home to get your sick toddler on the mend, and when you should call your pediatrician.

In this article:
Fever
Constipation
Diarrhea
Cough and sore throat
Rash
Vomiting
Congestion
Headache
How to soothe a sick kid
When to call the doctor

What to Do for Your Toddler’s Fever

First, don’t panic. “What you should do depends a lot on how the child is acting,” says Gina Posner, MD, a pediatrician at MemorialCare Orange Coast Medical Center in Fountain Valley, California. If your child has a slight fever but seems otherwise fine, you can “let them ride it out” while monitoring them for changes, she says.

But if your sick toddler is uncomfortable and doesn’t seem like themselves, or their fever is on the higher side, it’s a good idea to have them drink plenty of liquids, put a cool washcloth on their forehead to help them cool down and give them children’s ibuprofen (Motrin or Advil) or acetaminophen (Tylenol) as needed, says Ashanti Woods, MD, a pediatrician at Baltimore’s Mercy Medical Center. “Most medicines have a dosing chart on the label but a good rule of thumb is that for each 20 pounds a child weighs, that child would get 5 mL or 1 teaspoon of medicine,” he says.

If your child seems really miserable and you can’t get the fever down with medication, the fever is persistently above 103 degrees or if the fever has persisted for five days or more, it’s time to call the doctor, Woods says.

What to Do for Your Toddler’s Constipation

Your toddler may get the concept of going No. 2, but it can be tough for them to grasp why they haven’t been able to go lately—and why they’re feeling so uncomfortable.

Try to increase your child’s water intake and consider giving them prune and pear juice, which can help get things moving, Posner says. (Skip apple juice—it can irritate kids’ stomachs.) Make sure they’re also eating a lot of fruits and vegetables, she says, but try to steer clear of bananas, apples and carrots, since they can actually cause constipation. If that doesn’t do the trick, Miralax can help, she says, as can kids’ probiotics.

If none of that works, you notice blood in your child’s poop or you still can’t get them to go No. 2 after several days, it’s time to call your doctor, Woods says.

What to Do for Your Toddler’s Diarrhea

Diarrhea can be tough for a little one to handle, and it can leave your toddler feeling weak if they’re not treated properly.

Diarrhea in toddlers can be caused by a few different things—a virus, food poisoning or too much sugar, Woods says. The big concern with diarrhea is dehydration, which is why you should treat it by upping their fluid intake, he says. (Pedialyte is a good option in addition to water, Posner says.) “It’s okay for a child to continue eating while they’re going through a diarrheal sickness,” Woods says. “However, the child should avoid foods that have red or orange sauces, as it may be confused for blood when the child has a bowel movement.”

If your child seems lethargic, can’t seem to keep anything in them or is having bloody diarrhea, you should call the doctor, Posner says. Ditto if the diarrhea has gone on for more than a week or your child isn’t drinking much, Woods says.

What to Do for Your Toddler’s Cough and Sore Throat

Dealing with a toddler’s cough and sore throat can be tricky as a parent. Is it a big deal? Is it minor? Sometimes it can be hard to tell. Here’s what to keep in mind.

Push the fluids to keep them hydrated and give a pain reliever like children’s ibuprofen or acetaminophen to help with the sore throat, Woods says. If your sick kid is over a year old, you can also try giving them a little honey to help with the cough.

If the cough hangs on for longer than three weeks, the sore throat also comes with white spots on the tonsil or the back of the throat is really red, it’s time to call the pediatrician, Woods says. You’ll also want to notify your doctor if your child has difficulty swallowing when they drink fluids. For the record, strep throat doesn’t usually come with a runny nose, so if your child has a persistent sore throat and no other symptoms, it’s a good idea to bring them in, Posner says.

What to Do for Your Toddler’s Rash

Kids and rashes go together like PB&J, but sometimes a rash can be a sign of something serious.

If it’s not itchy, it’s a good idea to leave the rash alone but keep an eye on it, Posner says. If your child is itchy, Benadryl can be helpful.

Don’t hesitate to call the doctor if you’re not sure what’s going on here, the rash persists or it seems to be spreading. “It’s really hard to know what it is without seeing the rash,” Posner says. “As a doctor, I say bring them in so I can see what’s going on.”

What to Do When Your Toddler is Vomiting

This is probably the hardest one to deal with as a parent—you can feel completely helpless in the face of a toddler vomiting.

Like diarrhea, dehydration is a big concern here, Posner says, so try to make sure your child is replacing lost fluids with water or Pedialyte (small sips can be easier for the stomach to take). Ice poops can also help them replace some of what they’re losing, she says.

If your sick toddler is also complaining of pain in his lower right side, bring them in right away, Posner says. This could be a sign of appendicitis. You should also see the doctor if your child can’t keep anything down or seems lethargic, she says.

What to Do for Your Toddler’s Congestion

It’s tough when your little one is super stuffy, and it can be hard to unclog the congestion. Luckily, there are a couple tried-and-true tricks.

If your child doesn’t know how to blow their nose yet, you can use salt water nose drops to loosen things up and then follow it with a suction bulb to help remove loose snot, Posner says. Putting a humidifier in your child’s room at night can also help relieve congestion, she says.

If the congestion isn’t getting better after two weeks, it’s time to call the doctor, Posner says. That’s also true if your child has developed a fever or if he’s having trouble breathing through his mouth as well as his nose, she says.

What to Do for Your Toddler’s Headache

A headache can be tough for a toddler to explain, but they know one thing: It doesn’t feel great.

Your child may not want to eat or drink as much as usual with a headache, so make sure they’re well hydrated and still eating, Posner says. Ibuprofen and acetaminophen should also help with the pain.

If your child has a severe headache that isn’t responding to OTC pain medications, or if they’re lethargic or have neck pain along with a headache, call the doctor, Posner says. It could be a sign of meningitis.

How to Soothe a Sick Kid

Feeling under the weather is no fun—so it’s no wonder a sick toddler is often an upset one. In general, there are a few things that can help soothe your child, no matter what they’re dealing with.

Push the fluids. “Hydration improves most illnesses,” Woods says. You can make it fun by offering ice pops or slushies or adding crushed ice to your child’s favorite drinks.

Dole out hugs. Extra cuddles can help your child feel comforted, even when they otherwise feels yucky, Woods says.

Give them what they want. Sure, it’s probably a little different from your norm, but it’s okay to let your little one have milkshakes for a sore throat or a few ice pops for diarrhea or vomiting, Posner says. “Anything to make sure their eating and drinking is okay,” she adds.

Try a warm bath. It can create a soothing feeling, Posner says, especially when it’s followed by a snuggle session.

When to See the Pediatrician

Of course, if you’re ever in doubt, call the pediatrician. But there are certain situations where you should seek medical help pronto.

Your child is lethargic. “If your child is lying there and doesn’t have the energy to cry, that’s not a good thing. Go to the ER,” Posner says.

They’re acting off. You know your child better than anyone, and you can also tell when something just doesn’t seem right. In that case, call your doctor, Woods says.

They’ve had a fever for more than five days. Fevers can be persistent, but five days is too long, Posner says.

They’re not drinking liquids. Little kids can get dehydrated pretty quickly, Posner says, so you want to act fast if your sick toddler is refusing to drink at all.

They seem to be getting worse. Posner says “any change” in your child’s condition (other than improvement) warrants a call to the pediatrician. “If your child was doing better and then worsened, it can be a sign of a secondary infection,” she says.

How to Detect and Treat a Toddler’s Sore Throat

How to Prevent and Treat Hand, Foot, and Mouth Disease