The Surprising (but Easy!) Way to Protect Your Baby From Food Allergies 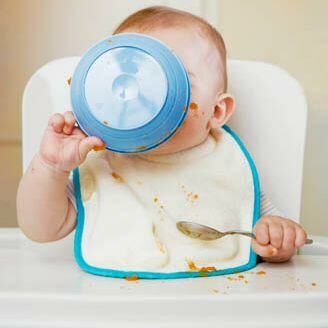 In the latest study published by The Journal of Allergy and Clinical Immunology. Kate Grimshaw, researcher at the University of Southampton in the United Kingdom, and a team of researchers found that babies who eat more fruits and vegetables and fewer packaged foods were less likely to develop food allergies.

The study, which looked at overall diet patterns instead of just specific foods, collected food diaries from the parents of 1,140 babies during their first year of life to see just how parents are feeding their infants and whether or not that had any affect on food allergies. What they found, Grimshaw noted, was that parents are sometimes advised to avoid certain foods in order to prevent food allergies but in doing so, they’re reducing the nutritional diversity of their infants’ diets.

During the course of the study, researchers compared the diary entries of 41 babies diagnosed with a food allergy to 82 infants without an allergy. They then scored the babies’ diets based on the combination of different foods that they ate. They found that babies without food allergies scored higher than babies with allergies on a diet that rich in healthy, (usually) homemade foods that included fruits, vegetables, poultry and had very low in processed foods like pre-made meals, potato chips, cook-in sauces and bacon.

Grimshaw said, “The analysis showed that the infants who were having more fruits and vegetables and less commercially produced baby foods and also less adult foods were the ones who were less likely to develop an allergy by the time they were two. It’s not that they didn’t have commercially-made baby foods, it’s just that they did not have them predominantly in their diet.” However, the study could not determine why it was that a fresher type of diet seemed to protect against food allergies, and it could not prove that dietary patterns caused the differences in allergy rates. The need for further research and studies is clear.

In an interview with Reuters Health, Grimshaw said, “We know that there are nutrients in the diet that educate the immune system. And one could argue that if they’re not there in adequate amounts when the child’s immune system is developing, that may be one way that this is working.” While more research is done, Grimshaw said that the findings of this initial study are just another reason for parents to feed their children fruits and vegetables and to try to serve as many homemade meals as possible, instead of pre-made meals.

Want to serve more homemade meals? Here’s a few ideas to get you started:

Do you think it’s best to serve baby homemade foods?