With so many mixed messages out there about introducing solids, it’s hard to know what’s best. Here, we debunk the most common myths to make it as smooth as possible. 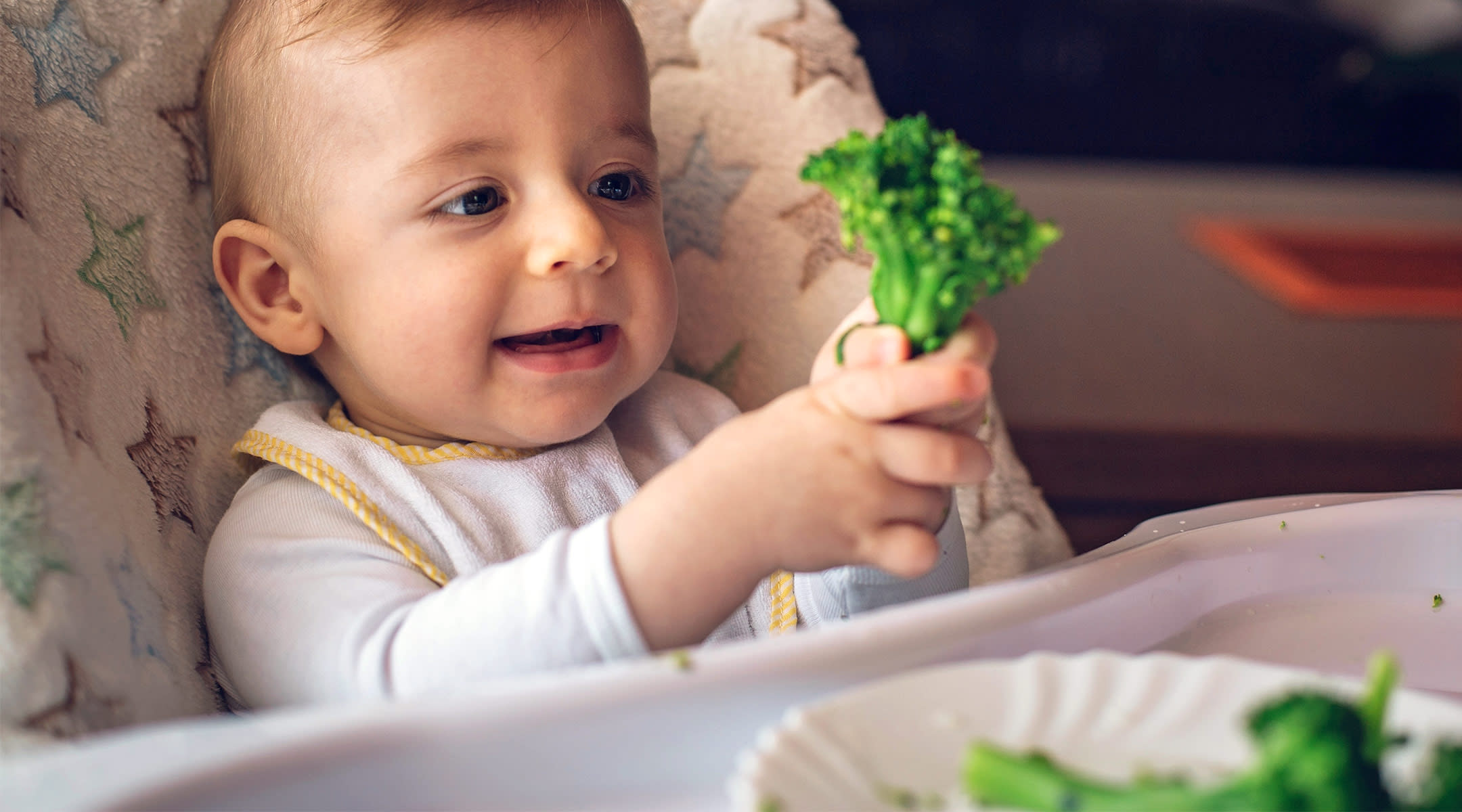 Starting solid foods is a big step in baby’s life. The way you introduce your little one to different foods can set the stage for an adventurous foodie or a perpetually picky eater down the line. If you want your child to eventually eat the same foods as you during dinnertime, the trick is to start them young. We’re clearing the air on common misconceptions so you know all the dos and don’ts to make for a seamless transition. Take a look below as we debunk a few of the most popular solid foods myths.

The sweet spot for introducing solid foods is right around the six-month marker, but that benchmark isn’t’ set in stone for every baby. In fact, the American Academy of Pediatrics (AAP) says parents should start introducing solids anywhere between 4 to 6 months. “You want them to start learning how to make their mouth do different movements besides just sucking,” says Amy Shapiro, RD, CDN and advisor to Fresh Bellies, a baby food company that features a collection of savory solid foods to make palate-training easy. But every baby is different, and your little one will start dropping hints to let you know they’re ready to broaden their horizons. “I always say the best time to start with food is when the child starts to show interest,” Shapiro says. If baby has been intently watching you eat, it could be their way of letting you know they want a go at it themselves.

As you keep an eye out for those cues, be careful not to ignore the signs baby isn’t ready to start solids. Shapiro says one of the most obvious signs your child isn’t there yet is if they can’t hold their head up on their own. Remember, your little one can’t start to dig in until they’re developmentally ready for it.

So you’re ready to make the leap into solid foods. Now what? Going with plain or sweet food may be your initial instinct, but don’t corner baby’s taste buds so early in the game. Shapiro advises parents start with vegetables instead. “That’s why I like the concept behind Fresh Bellies—it’s less of a sweet focus and more of an herbal, vegetable-based focus,” she says. “I like to start children off on that, so they don’t get used to the sweet taste and constantly look forward to it.”

Sure, you may not be taking your kid to five-star restaurants any time soon, but that doesn’t mean you and your family won’t step foot in a fancy restaurant ever again. The secret is to subtly introduce them to the flavors you’re going to eat together. Little by little, they’ll get used to those food profiles when it comes time for them to eat meals. So go ahead and add a touch of garlic or a pinch of basil. “Most parents are fearful that their kid isn’t going to like different foods, so we start creating picky eaters at a young age and kind of subscribe to that,” Shapiro explains. “There can be a little bit of garlic, basil, thyme and more flavor to it.” But as tasty as adults find salt, it’s best to avoid that particular seasoning in baby’s food. “You don’t want to over-salt anything, because just like sugar, people become really dependant on salty foods,” she adds. You should also keep your kiddo away from honey until they’re one year old, to avoid the risk of botulism.

Peanuts are the No. 1 known cause of food-related allergic reactions for children in the US. Some nut allergies are so severe it can be a matter of life and death. So of course your natural instinct is to shield baby from any and all nuts—but by doing so, you may be unintentionally putting your child at a higher risk for developing a nut allergy. “You want to build up a tolerance to it,” Shapiro says. “Your body should get used to it in small doses, just like it gets used to apples or pears.”

Her advice is on par with the AAP’s stance. In recently updated guidelines, pediatricians encourage parents to offer babies food considered to be highly allergenic, such as peanuts, early and often to avoid food allergies. “If you have a history of family allergies, then you would want to do it in a safe place first, like a doctor’s office, or be prepared with the kind of medicine you may need to provide,” Shapiro advises.

So how can you safely serve nuts to your little one? Shapiro has some tasty ways to transition it into foods, such as mixing peanut butter or almond butter into smoothies and pancakes, or letting them sample cereals with traces of nuts in them, such as Honey Nut Cheerios. Just keep in mind, “Peanut butter is really calorically nutrient-dense, so baby might fill up quite quickly from it!” Shapiro says.

In your excitement to ensure baby’s taste buds are well-versed, you may be tempted to introduce meat ASAP, but the truth is, baby isn’t ready to dig in just yet. For the first few months, plant-based foods are the best solids you can feed baby. “Meat is a pretty tough macronutrient to break down, so you want to populate baby’s gut with healthy bacteria and fiber from plants,” Shapiro says. “After that, begin cooking with some oils and full-fat yogurts. Move up to the proteins towards the end.” That means holding off on meats until your little one is around 8 months old. “As baby’s digestive tract builds and the enzymes get stronger, that’s when to introduce proteins and heavier foods, such as meats,” she says.

Most of us grew up hearing, “you can’t get up from the dinner table until you’ve finished all your food.” It’s been ingrained in our heads that we must be a member of the clean plate club. But it’s actually important for young ones to learn to listen to their body when it’s telling them they’re full. “When a child turns their head or purses their lips at a young age or shuts their mouth, that’s them telling you that they’re full,” Shapiro explains. “We’re born with the knowledge to say when enough is enough when we’re eating, but as we get older we kind of ignore those sensations.”

As parents, we’re wired to jump to conclusions, but just because baby doesn’t eat a lot of the solid food in one sitting, there’s no need to sound the alarms. Instead of focusing on one specific meal, try to think of the larger picture. “I always tell parents to look at what their kid is eating in the course of a week and not the course of a meal,” Shapiro says. “At this young age, they’re going to be getting most of their nutrients from breast milk or formula anyway, so this is really just learning skills.” As baby explores more food, Shapiro says to focus less on how much of it they’re eating and more on the variety they’re eating. At the end of the week, ask yourself, has baby had a food that is naturally green, brown, orange or red?

Dig In! A Guide to Starting Solids