Your Guide to Picking Godparents: What They Do and How to Choose

Godparents serve a special role in your child’s life. Here’s everything you’ll want to know about the tradition and how you can make it your own. 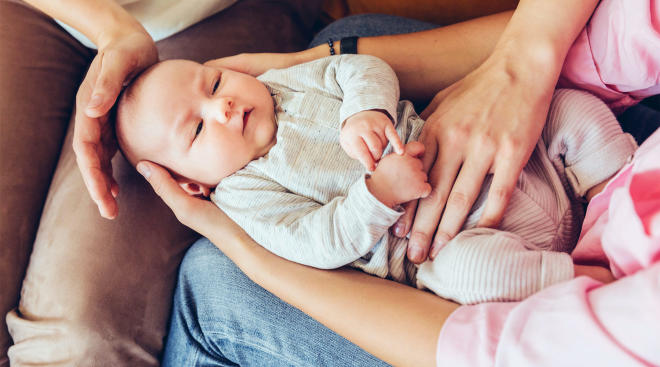 As a new parent or parent-to-be, you’ve likely thought of all the ways you’re planning to support and guide your child through life. But have you considered who else could serve as an advisor and role model for your child? After all, life’s path can get a bit bumpy, and the more positive influences in your kid’s world, the better. That’s where a godparent comes in.

“Godparent” is a term that gets tossed around a lot, but you may find yourself wondering, exactly what is a godparent? Whether you’re religious, spiritual on your own terms or strictly secular, here’s what you need to know about the tradition, the role of godparents and how you can make the custom your own.

What is a godparent?

The role of godparents

How to choose godparents

How to ask someone to be a godparent

Celebrating with a godparent ceremony

What Is a Godparent?

Traditionally, a godparent is a sponsor chosen when someone, often a baby, receives the sacrament of Baptism, a rite of admission into Christianity.

“The godparent is a member of the church community who supports the faith of the person being baptized,” says Robert Matava, PhD, dean of Christendom College Graduate School of Theology in Alexandria, Virginia. “Given the responsibilities that faith and incorporation into the Church entail, the godparent should be someone who can help the newly baptized person understand and live out these responsibilities.”

Depending on the type of church you belong to, the precise godparent definition can vary.

“What this looks like depends on the church in which the parents belong,” explains Michael Bos, senior minister at Marble Collegiate Church in New York City. “It can mean hands-on conversations about faith with the child, or even being ready to step in and oversee the children’s spiritual formation should anything happen to the parents.”

Whether the idea of appointing a godparent is part of your religious beliefs or not, you can still have a godparent figure in your kid’s life. This may change the godparent definition a bit, but it’s all centered around a desire to provide your little one with a strong role model in life.

“I like the term ‘guide parent,’” says Greg Epstein, humanist chaplain at Harvard and MIT and author of Good without God. “Many people want somebody who they love and admire who will play a special role in their kid’s life…It’s essentially adding an extra role model for the child.”

How many godparents can a child have?

According to the Catholic Church, a child can have up to two godparents (and in that case, they must be a man and woman), but only one is required. But as Bos points out, each church or organization may have their own unique guidelines. “Traditionally it’s been two, but some churches have three, some only have one and others have no specified number at all,” he says. And of course, if you like the idea of naming non-religious godparents, you can have as many as you’d like.

The Role of Godparents

The role of godparents, traditionally, is to help the christened person understand and live out their faith and religious responsibilities. “This can include things like helping the newly baptized person to understand the beatitudes and the decalogue; guiding them to find, accept and fulfill their personal vocation; and raising their awareness of the Precepts—or laws—of the Church,” Matava says.

But the role of godparents doesn’t necessarily have to revolve around religion. Most godparents take an active role in all aspects of the kid’s life. “For many, this role has expanded to become more of a co-parent,” Bos says. “It can be tough raising children, and it can be tough being a child. A godparent can provide a significant relationship of love and support for a family.”

How to Choose Godparents

Seeing as you can select your child’s godparents from among family or friends, the pool of potential candidates can be pretty big, and it can be tough to only pick a couple of people to honor with the coveted title. Careful deliberation should go into choosing godparents. Ask yourself: What is a godparent and what does it mean to you?

If you’re a member of the Catholic Church, there are a few guidelines you have to follow, Matava explains. Godparents must be chosen by the parents or guardian and cannot be the child’s mother or father. They should also be at least 16 years old and must be an active member of the church who has received the sacraments of confirmation and communion. Keeping all that in mind, choose “someone who can serve as an authentic example of Christian charity—someone who could demonstrate holiness of life,” Matava advises.

The role of godparents isn’t just an honor—it’s a big responsibility. Once you’ve made a decision, check in with the particular family member or friend to make sure they’re personally up to the call of duty. “Remember that this is for life. You don’t fire godparents or swap them out,” Bos says. “You want to ask someone you know will be a positive presence in your child’s life—and yours.” He adds, “A way to think about this, particularly if you expect the godparent to have an active role in your child’s life, is to ask yourself: ‘Would I be comfortable having this person raise my child if I weren’t able to?’ If the answer is yes, then you’re on the path. In fact, many godparents are also named as the child’s legal guardians in the parent’s will.”

Religion aside, Epstein says each parent should think about why they want to choose someone as a godparent, and what’s unique about that person that can be passed on to their child. “If someone is creative, they can introduce different types of music, art and drama into your child’s life; if they’re into science, they can teach different STEM concepts through play and activities; or if the potential ‘guide parent’ is someone involved in community, encourage them to take your kid to a soup kitchen, get involved with a local charity or even peacefully protest something they believe in,” he says.

How to Ask Someone to Be a Godparent

Once you know who you’re going to ask, the next question is when. If you’re a member of the Catholic Church, the earlier you ask the better. Many parishes require a letter of recommendation from the godparent, as well as other forms of documentation showing they’re active members of the church and understand what’s expected from the role of godparents.

“It’s wonderful when godparents are asked before a child is born. This allows them to provide support from the first day of the child’s birth,” Bos says. “Before asking someone, it’s critical to know your church’s requirements for this, and to explain your and your church’s expectations for the godparent.”

Regardless of whether it holds religious significance for you, asking someone to be a godparent is a big deal. Luckily, there are lots of ways to make the moment memorable. Heartfelt cards and personalized gifts—like picture frames, keychains or jewelry—add a nice touch. You can even DIY simple but sweet sentiments to gift to a godparent. The blogger behind Life in a Nutshell shares a cute way her friends asked her to be a godmother with an adorable poem signed from the baby-to-be.

Celebrating with a Godparent Ceremony

As far as a godparent ceremony is concerned, Catholics welcome baby into the church and celebrate their godparent during the sacrament of Baptism. But if you’re not religious, you can still commemorate the milestone in a handful of other ways.

“A ceremony revolving around the birth of a child goes across every culture the world has ever known,” he says. “There’s no single, one-size-fits-all book telling you how to do it, but there are endless opportunities to make the ceremony your own.”

He suggests a “Welcome to the World” party as a secular alternative, during which the newly appointed godparents can make speeches, similar to wedding vows, revolving around what they hope for in their relationship with baby and all the ways they’ll see it through. Another sweet idea is to have godparents honor their bond with baby by planting a tree with the parents to symbolize their blossoming relationship. They can also bury a few important mementos in a time capsule for baby to discover 10 or 20 years later, reminding the godparents they’re a constant force in baby’s life, or write letters to baby that your child will be able to read when they’re older.

“Godparent” is an ever-evolving and open-ended term. For some it’s vested in sacred and holy traditions, while others see it as something that has nothing to do with religion at all. Whatever your beliefs, there’s always a way to make the tradition your own. If nothing else, it’s an opportunity to provide your child with another adult role model who they know loves them and wants the best for them throughout life.

Unique Birth Traditions Around the World

How to Turn Little Moments Into Big Celebrations All Year Long

Why You Should Make a Family Mission Statement