What It’s Really Like to Grow Up as a Twin

Twin babies are more common now than ever before. So what can a mama of twins expect as her twosome gets older? We asked the experts — twin adults and big kids — for the nitty-gritty on life as a twin. 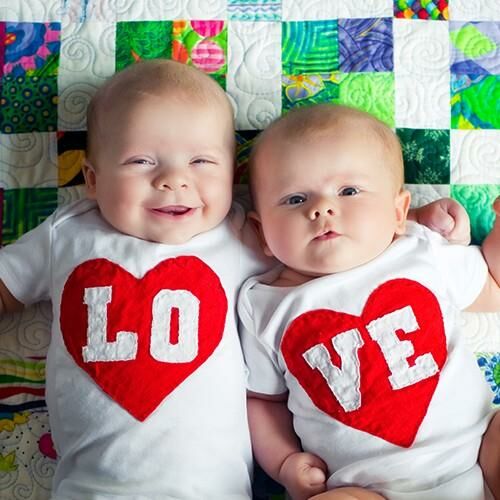 “When we were in elementary school, we switched language classes. My twin sister, Shari, went to my Spanish class and I went to her French class. The only problem is that I didn’t know French at all and the teacher gave a pop quiz the day I was in Shari’s class! We also played tricks on boyfriends. I had a boyfriend who insisted he could easily tell us apart, so one day I had Shari go out with him as me. He kept telling her that she ‘looked better than ever,’ and at the end of the date, I appeared. He was so upset that he cried. We felt bad and decided we shouldn’t do that again.” — Judi Z., adult identical twin

“I like to dress alike because then people say we look like twins. I like being a twin because we can play together, and there’s nothing I hate about being a twin. Sometimes we think alike, but we keep it a secret.” — Kadin, seven-year-old fraternal twin

Some similarities may be more because of nature than nurture

“Growing up, my sister and I were inseparable with a lot of very similar qualities, likes and dislikes.  Then we went to different colleges and came back two very different people. I am really laid-back and confident, and my sister is shyer and a bit insecure.” — Kristin, adult identical twin

Comparisons can be hurtful

“One of the worst things about being a twin is that we’re constantly being compared. No one wants to be the ‘fatter’ twin or the ‘weaker’ twin.”  — Judi Z.

You may want to try giving them different gifts

“Growing up as a twin, most people assume you’re exactly alike, and it feels like people view you as one person. Being treated like you are a pair can make it hard to be an individual. When I started spending more time apart from my twin, I was able to figure out who I was besides being a twin. I don’t think there is anything wrong with being a twin, but it’s hard to see yourself as an individual growing up. Our parents have always given us the same gifts for Christmas and our birthday, and this still continues today — I think it’s because they want to be fair. I wonder if all twins’ parents do that.” — Wendy, adult identical twin

“We had a twin language when we were babies. My mom said it was like living with people who spoke Spanish or something — she could never figure out what we were up to. Now, we finish each other’s sentences all the time.” — Jamie, adult identical twin

“We did have a crush on the same guy when we were 13, and it wasn’t fun. We decided after that we would have a ‘whoever saw him first’ rule, and that has always worked for us.” — Judi Z.

“We’re not sure if it is the ‘twin sense,’ but we have countless examples of ‘feeling’ what the other one is.  Even just recently, my sister got extra nervous right around the time I was about to speak at a conference in another state.  Sure enough, she looked at the clock and it was the time I was getting on stage!” — Amber, adult identical twin

They can be very poetic about being a twin

“We are twins, and from birth — if not before — we were together on this journey. We were each other’s best friend and never needed others to keep us busy. Our interests are exactly alike. Even our other siblings could never have that same connection.” —_ Allen, adult identical twin_

People will say ridiculous things to them, but they’ll get used to it

“Someone once asked us if we could tell each other apart. Of course we know which one we are!” —_ Judi Z._

“We’re often asked, ‘So, does that mean you have the same birthday?’” — Amber

“I’m curvier than my twin, so there have always been comments about me stealing or absorbing body parts of hers in the womb.” — Grace, adult fraternal twin

“‘You look exactly alike!’ There’s about a five-inch difference in our height, and one is blond and the other is brunette.” — Daniel and Benjamin, 16-year-old fraternal twins

Worst Things to Say to Moms of Twins

Parenting Secrets for Moms of Multiples