Get ready for water-related names like Nixie, Pearl, Fisher and Fin. 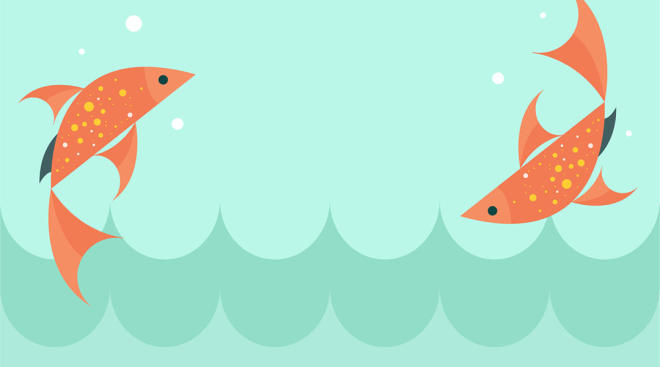 This year, the cycle of the water sign Pisces falls from February 18 until March 20. The final of twelve signs, Pisces is represented by two fish swimming in opposite directions. Pisces people are known for compassion, creativity and their dreamy persona. Despite being a dim and overlooked constellation today, Pisces is one of the oldest signs of the zodiac and has heavy representation in both ancient and modern religions.

Adrian Van Maanen and Charles Messier discovered pieces of the Pisces constellation; their names offer choices for lovers of astrology with a classic taste. Similarly, Alf is a nod to Alpherg, one name for the constellation’s brightest star.

From the Indonesian word arwana for “fish of paradise,” Arowana is full of trendy vowel sounds and nicknames like Ari and Arrow. Other types of fish that would work as names include Marlin, Zander, Molly, Mora, Pollock, Koi, and Pike. Minnow makes a cute nickname for more serious names like Minerva or Wilhelmina. If you want something fiercer, shark names Thresher and Mako fit that bill.

Much lore surrounds the number twelve. Months, hours, Olympian gods, dancing princesses, and signs of the Zodiac all come in twelves. Twelve in Turkish is Oniki; Barah is the Hindi word. Fin has double cred as a Pisces name; not only is it fish-related, but it also is French for “finished.”

In tune with the symbol of Pisces, names connected to fish are the most straightforward way to honor this astrological sign. While not many names – the Sanskrit Mina being one of the few – mean fish, word name Fisher and foreign counterparts Fischer, Fisk and Ryoshi are more options.

Pisces is ruled by the planet Neptune, whose name is taken from the Roman god of the sea. Many of the planet’s moons are derived from Greek mythology and make interesting baby names. Triton is a merman god and the messenger of the sea. Also consider regal-sounding Galatea, a sea-nymph, and Thalassa, an ocean spirit known as the creator of fish.

Most Pisces are born in March, a month named for the Roman god Mars. Several gemstones are associated with the sign, including the ocean-colored Aquamarine. The sea-green shade is also representative of Pisces; Turquoise, Bondi, and Teal are other blue-green hues.

Water names are perfect for a Pisces. Upcoming Disney princess movie Moana, features a lead character with this Maori name meaning “ocean.” Nerissa and Marina both mean “from the sea.” Japanese names Kai, “sea” and Nami, “wave” have a modern feel. Beck means “brook” and Naida is Greek for “water nymph.”

Myths about the Greek gods Aphrodite and Eros feature the fish from the Pisces constellation. These divine names would make an interesting middle place reference to the star sign. Other names in ocean myths are Llyr, Pan, Sequana, and Leviathan. Germanic water sprites are called Nixie and Greek stories feature sea nymphs called Asia, Ianthe, and Clio.

Both as the sign of the fish and a water sign, Pisces has strong ties to the aquatic. Ocean names like Coral, Pearl, and Reed and are a natural choice. Other water words that double as names are Bay, Lake, Brook, Rain, and River.

Pisces people are said to be creative, empathetic, and romantic. For a name focusing on these traits, look at Teagan, Kavi, and Riordan, “poet;” Adwin, “creative;” Caoimhe and Kevin, “gentle, kind;” Hanan, “compassion;” and Noa, Carys, Ren, and Rudo, “love.”