Donte Palmer Teams Up with Pampers for Viral #SquatForChange Challenge

The dad first went viral when he posted a picture of himself squatting in a public bathroom to change his son’s diaper. This is what he's up to now.
save article 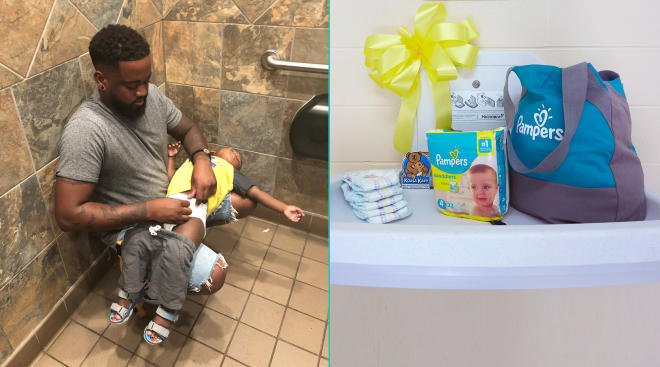 Remember that photo of dad Donte Palmer squatting on a restroom floor to change his son’s diaper? The outraged father may have become an overnight sensation, but his public plea has been far from fleeting. Almost a year later, he shows no signs of slowing down.

Palmer’s post made a statement not because what he was asking for was so outlandish, but because he was addressing a basic parenting need that’s sadly been ignored. His PSA has inspired the Squat for Change movement, where he hopes to transform changing a baby’s diaper into a “man thing too.” Hundreds of dads have joined the movement to share how they squat, including singer and songwriter, John Legend.

“I love being a hands-on dad, and it is so important that we acknowledge the active role dads are playing in their babies’ lives,” says Legend. “Spending time out and about with my kids is one of the greatest joys in my life, but it’s frustrating when I am out with Miles and the men’s restroom doesn’t have a baby changing table. I’m proud to support Pampers as it paves the way for more inclusive parenting by providing all of us dads out there with the tools we need to succeed.”

Palmer has even attracted the attention of Pampers. Now, Palmer and Legend are working with Pampers for its “Love the Change” campaign to provide 5,000 changing tables in public restrooms across North America by 2021. Over the course of the next two years, Pampers will identify high-need public locations and provide baby changing tables for installation in the men’s restrooms there. Dads and babies visiting parks and recreation centers, community centers and libraries in cities such as Cincinnati, Dallas, Philadelphia, Detroit and many others across the US and Canada, will benefit from Pampers’ campaign. The first 500 locations have already been identified, and installation is expected to be completed in the coming weeks.