And yes, she did a spot test first.
Save article
ByAnisa Arsenault
Associate Editor
PublishedOct 2017 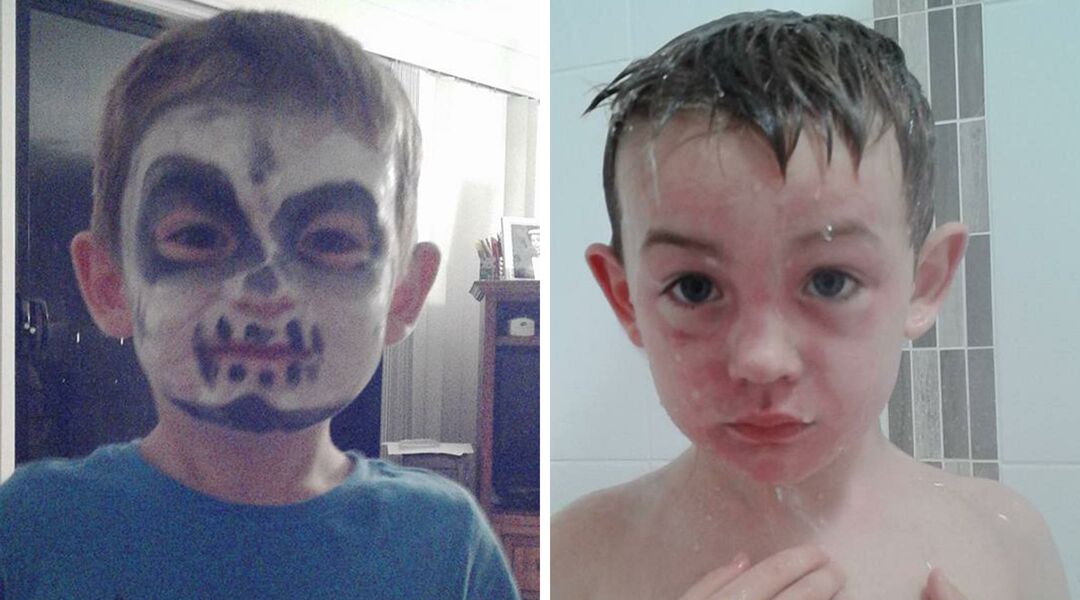 Leading up to Halloween, Australian mom Alexandra Leigh Carter decided to do a trial run on her son’s costume. And McKenzie’s zombie face was a success—for about three minutes. That’s all the time it took for the face paint to burn his skin.

Now, Carter is sharing photos from the incident as a warning to other parents. And before you ask—yes, she did a skin test on McKenzie’s wrist first, and he didn’t have a reaction.

“After doing a skin test and it being fine, I proceeded to face paint my son with the Halloween Makeup Kit I purchased from Woolworths,” Carter writes on Facebook, referring to the Australian supermarket. “This was only on him for three minutes and then had to immediately take him for a shower. It has severely burnt his skin. I’d like to share this to warn other parents. We did this as a trial run for Halloween and safe to say I’ll never be using face paint again. I’ve had his face painted countless times, though whatever is in your product is horrific.”

Carter took a look at the ingredient list, which she shared with LittleThings.com.

“After doing independent research and some insight from face painters, I’ve found what each of those chemicals is in the product,” she says. “Some are even used in acrylic nails, for example. There’s a coloring agent called CI42090 that’s even banned in the majority of Europe, so I question why its allowed in Australian products!”

Carter says her son has never reacted to face paint before, and he won’t be using it again. If you’re worried about taking the face paint route with your child’s costume, check out our list of 39 toddler Halloween costumes, no face paint required.

What Causes Baby Eczema—and How to Treat It

Bummed Out! How to Treat and Prevent Diaper Rash