Lots and lots of wine and a bucket of pickles, obviously.
Save article
ByAshley Edwards Walker
Contributing Writer
PublishedJul 2018 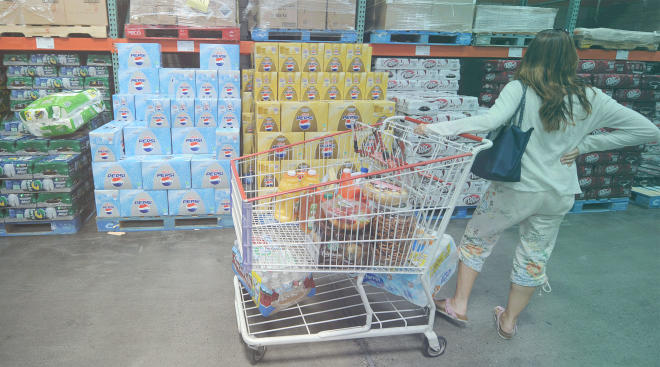 Anyone who’s ever shopped at a big-box store like Costco or Sam’s Club knows that sometimes, things end up in your cart just because they’re there. But hey—you’ve got mouths to feed, and that 120-count box of pizza rolls will (probably) get eaten (eventually). Honestly, who can resist when you’re pushing a giant cart past all those free samples of dumplings and granola and chorizo? No one—including mom blogger Jen Smedley, who perfectly captured the absurdity of it all in her spot-on Costco shopping list she recently shared with the world.

Smedley, a comedian and half of the mom duo behind the popular blog I Mom So Hard, posted a screenshot of her Notes app to Instagram, saying, “Headed to the Costco tomorrow and just trying to keep it real. What I need vs what I get… oh boy. What am I forgetting?”

On Smedley’s shopping list: Wine, wine, lots of wine (because #parenthood). Also, a bucket of pickles, a six pack of John Grisham books “just because,” a 50-pound bag of trail mix “that will never get eaten,” an extra TV, and so much chicken—requested in breast, nugget, and salad form.

Perhaps the funniest part? Smedley tells Today the note started as her actual shopping list that she made while trying to decide if she or her husband should make the run.

“We both always think the other one comes back with hundreds of dollars in ridiculous, unnecessary items,” she explains, pretty much a universal argument every couple who shops at Costco has at least once. “We go with the intent of saving money by buying a gross [amount] of individual potato chip bags, and end up blowing money on individual guacamole servings and barrels of peanut butter that it takes years to go through."

Yep. Been there (a few times). And so, apparently, have the more than 8,200 people who’ve liked the post.

“This is hysterical & yet so true!!” one follower commented.

“I have that same trail mix my kid swore she’d eat way back in like January,” another wrote. “It’s currently sitting on my dining room table, unopened, taunting me.”

One woman even shared her own hilarious list. “This is literally me the other day I had a list: Stand up paddle board? Five bags of beef jerky. Corn starch JUMBO. Cereal containers ON SALE. Few life vests. Diapers (for the child I don’t have),” she wrote. “Like that was literally my list.”

Plenty of Costco pros then weighed in on all the goodies she forgot to get.

“You forgot the mega size box of granola bars… With two flavors that contain peanuts. Oops! You forgot you are allergic to peanuts,” one commented.

“Another box of pull-ups even though you swore up and down that that last giant Costco box would be your last,” another chimed in. “Wipes. Rotisserie chickens. Gotta get at least one or two every time! Athletic wear that you know will never be worn to the gym. Wine. So much wine. Z bars. Kodak cakes mix. And somehow I’ve now spent $300… I think I need to go to Costco this week.”

As for Smedley, she told Today she’s been “totally surprised” by the response to her list.

“I thought we were the only ones who were terrible at shopping,” she said. “But there’s one thing we’re all in agreement about: They get you with those samples. You shop hungry, and you end up buying 3 pounds of dried apricots.”

True. But Costco, we just can’t quit you.