According to the report, baby girls get an extra 4.5 hours of sleep on average over the course of a month.
ByNehal Aggarwal
Associate Editor
PublishedMar 2020 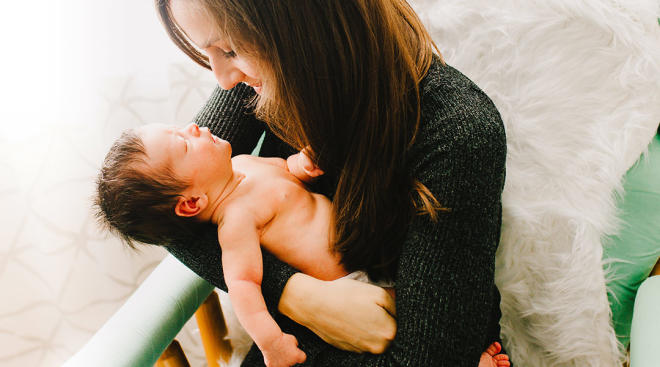 This week is Sleep Awareness Week, an annual event pioneered by the National Sleep Foundation as a way to create awareness around better sleeping habits for everyone. While being tired because you were up late scrolling through Instagram is one thing, having to constantly wake up to take care of baby—as most new parents do—is another. To help parents better understand how babies sleep, Nanit, working with universities and researchers, recently put out its State of Sleep report, finding that girls actually get more sleep than boys.

Since 2016, the baby monitor company has tracked over 54.9 million hours of sleep and 12.1 million nighttime visits from parents. The report analyzes data from over 5,000 parents. It found that, over the course of a month, baby girls get an extra 4.5 hours of sleep on average. Plus, at 6 months, baby girls get an average 10 minutes of sleep more than baby boys per night. They also tend to wake up less frequently and sleep longer into the morning.

Additionally, the report found that total nighttime sleep for babies steadily increases until 12 months old, after which it starts to plateau. Similarly, the average bedtime for a 3-month-old is 8:14 pm, but this decreases to 7:45 pm by the time baby is 7 months old. One thing parents can do to help their little one get some shuteye? Use white noise. According to the report’s findings, parents who used white noise found that their babies, on average, required one few visit per night and had an additional 30 minutes of sleep per night.

Surprisingly, the report also noted that babies who wore cloth diapers needed more visits from parents per night when compared to those who used disposable diapers. Unsurprisingly, parents of babies with sleep problems are almost three times more likely to experience daytime dysfunction, affecting activities such as driving and job performance.

Settling into a routine that allows both baby and parents to get enough sleep can be incredibly difficult. Luckily, there are things you can do to help. If you’re a new parent looking for ways to get your newborn to sleep, check out our top tips.