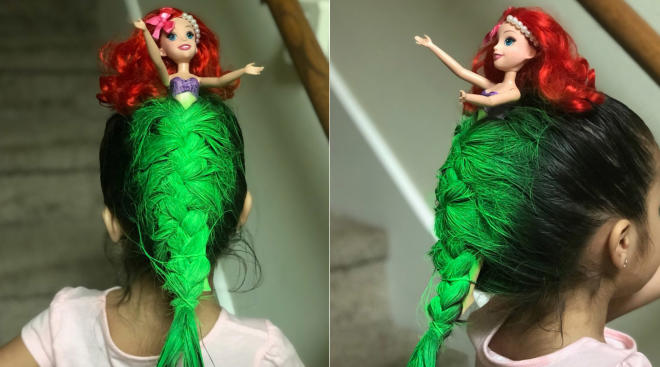 There are a lot of roles that fall under the job title of “parent.” Not only are you tasked with guiding your tiny humans through life, you’re also expected to hold your own when it comes to sacred school staples like spirit day, 100 days of school and crazy hair day.

One mom was on a mission to blow the rest of the competition away for her daughter’s crazy hair day. Inspired by The Little Mermaid, she used an Ariel doll to weave her youngster’s hair into an epic braid. The little girl’s older sister, who ironically is named Ariel according to her Twitter, couldn’t help but share their mom’s masterpiece with the web.

“My sister had crazy hair day at school today and my mom was not playing games and really wanted her to win,” the big sister jokes on Twitter.

The mother’s work of art didn’t go unnoticed. The tweet amassed more than 740,000 retweets in just days, with more than 130,000 others commenting to praise the hairstyle. In addition to the mom receiving the recognition she so deserved, it inspired other parents to share snapshots of their crazy hair day styles. Let’s just say, these parents aren’t messing around.

Behold, some of the most incredible hairstyles surfacing on the thread: