The tennis all-star started a #ThisMama conversation on Twitter, and parents can’t get enough of it.
ByStephanie Grassullo
Associate Editor
PublishedAug 2018 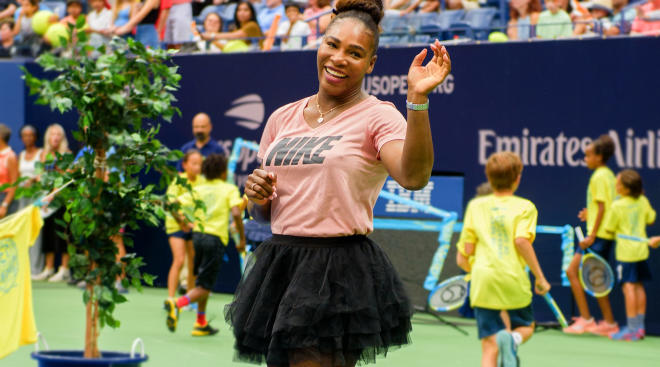 Serena Williams continues to show us how relatable she is as a mom. After opening up about her struggle with postpartum depression, she’s once again taking the internet by storm.

The tennis superstar turned to Twitter to share a story about one of those days she had with her daughter Olympia. The two recently boarded a plane, but, like pretty much all babies, the 11-month-old wasn’t in the mood to sit still. After chasing Olympia up and down the aisle, Williams finally got her to calm down—at which point her daughter promptly threw up on her.

Instead of looking at it with defeat, she used the moment as an opportunity to share her story with other parents who’ve experienced similar meltdowns. The pro-athlete took to Twitter, saying, “kids humble us.” With nearly 5,000 retweets and more than 40,000 likes, the tweet clearly struck a chord.

Motherhood is no cake walk, and it’s times like these that help define us as parents. Williams is definitely not alone in feeling exhausted or wearing clothes covered in baby vomit—which is why she took this as an opportunity to bond with others.

“#ThisMama would love to hear your stories of motherhood…Even ones like this! Share and tag them with #ThisMama,” she urges.

Moms were not shy about sharing their stories, including the good, the bad and the ugly.

As one mother so perfectly says, laughter is what gets us through it.