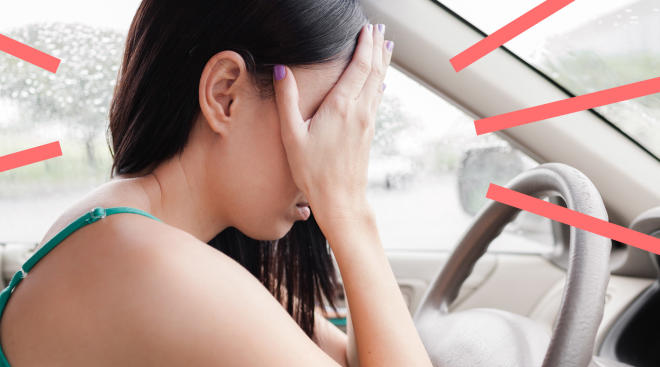 As parents across the country start heading back to school, they’re feeling the pain of the school drop-off line—and Lewis captured most of these pretty universal complaints in her spot-on parody video that’s now gone viral. Her ongoing commentary, interrupted by gulps of much-needed coffee, makes you feel like you’re stuck right there with her.

“This isn’t Days of Thunder,” she calls out after watching a painfully slow unbuckling. “They coulda unstrapped way back there, we’re not rolling through here at 75 miles an hour.”

And like all of us, she can’t help reacting to the mom who seems to have mastered the process. "Look at her,” she says. “She been up, dressed, worked out this morning, took a shower. Overachiever.”

When another parent is hold up the line of cars, Lewis is tempted to get out and tell her off—but she has good reasons for staying put. ”I’m about to get out, beat on her window and tell her to move up. I would, if I wasn’t sitting here in pajamas and hadn’t brushed my teeth.”

And they did. So far, her Facebook video has racked up almost 9 million views, 111,000 shares, and 11,000 comments, making it clear that Lewis is not alone in her school morning angst.

“I’ve never seen a video that was so “ME” in my life! Literally, this is me everyday!” one parent commented.

“LMAO See, this is how I feel. Me and this lady have a lot in common,” another one said.

“I hate to admit that I actually saw a wreck one morning taking the kids to school. I was too embarrassed to get out because I was in my pajamas and hadn’t brushed my teeth or put a bra on. I yelled out the window to make sure they were okay though!!!” one mom chimed in.

“Have you been sitting in the car with me, you sound just like me,” another added.

But not everyone was on her side.

“Taping yourself being an inpatient b***h in front of your kids. We have all been there, but frankly those aren’t the moments of glory I want on the highlights roll,” one commenter wrote. “Get a life! Good morning America isn’t going to call.”

Guess what? She was wrong. Someone from the GMA team had already reached out to Lewis on the same post, asking permission to share the video on their social and digital channels.

For those whose kids still haven’t gone back to school, this video may be just the thing to get you geared up for the morning ritual—or at least make you laugh about it.