If Your Kid Loves to Talk About Private Parts, This Twitter Thread Is for You

If your toddler has said something equally as cringe-worthy, we want to hear it.
facebook
twitter
copy link
email
save
ByAnisa Arsenault
Associate Editor
Published May 18, 2018 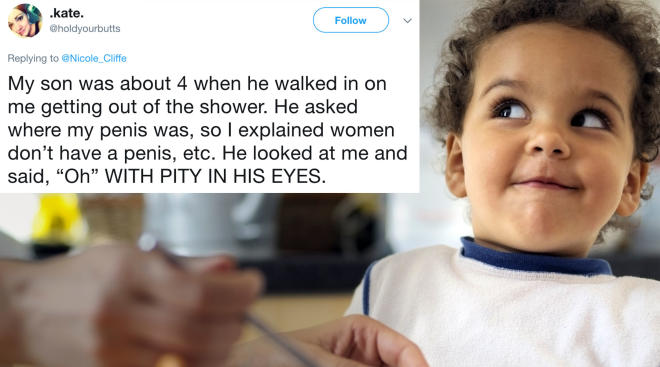 The true test of parenting isn’t labor. It isn’t your first diaper change. It’s not even sending your kids off to college. It’s talking to them about private parts. Sure, you want your toddler to learn accurate anatomical words and understand how their body works. But you’d also prefer they didn’t shout about penises in the grocery store.

Writer and mom Nicole Cliffe voiced her particular struggle with toddlers and private parts on Twitter. And it seems like all parents on Twitter had a story of their own to add.

“Some people have woke toddlers, I have a toddler who informs women at the grocery store that sometimes his penis get big because there’s blood in it,” Cliffe tweeted. “LISTEN, lady trying to innocently purchase apricots, IN OUR HOUSE WE LEARN ACCURATE REPRODUCTIVE SCIENCE.”

We’ve rounded up some of the best responses from other parents who’ve been there. And if your toddler has said something equally as cringe-worthy, we want to hear it.

1. “When I was pregnant with my 2nd and had boobs the size of melons and nipples like saucers my toddler son told me “I like your big, big nipples!” And I was like oh, Oedipus, no.” — @leezabobeeza

2. “Mine is telling anyone who will listen that her ‘baby sister’ is in my belly (false) and she will come out my ‘pachina.’ She also tells random men at the grocery store they have penises. I tried.” — @cynical_parent

3. “When my son was 2, the babysitter’s kids taught him to say vagina. It took us a while to figure it out because he was yelling ‘Big China!’ I don’t think they actually told him what it meant.” — @_olliemorgan

4. “From the mall bathroom: ‘MOM, I NEED HELP CLEANING MY VULVA.’ Yay for accuracy” — @ livelab

5. “After learning what it meant for her dog to be in heat, my niece spent about a week asking random women at Little League if they were ‘heating today.’” — @JordanMetcalf13

6. “My toddler once informed a large breasted woman on the bus that her breasts must be FULL of mommy milk!!” — @thisgroovymama

7. “When my boys were toddlers one of them discovered his penis could be played with. He then looked at his twin, who has CP, and then up at me ‘Mommy, Alex can’t play with his penis but that’s ok, I’ll help him.’ Sweet of him to offer though.” — @mariaathena07

8. “My son was about 4 when he walked in on me getting out of the shower. He asked where my penis was, so I explained women don’t have a penis, etc. He looked at me and said, ‘Oh,’ WITH PITY IN HIS EYES.” — @holdyourbutts

We should all take a cue from the superhero mom found a way to solve the entire problem:

9. “I always told mine that is was perfectly normal to talk about that kind of thing, but a lot of silly grownups think it’s naughty. Can you believe it? So we don’t talk about ‘privates’ in public. They LOVED feeling smarter than silly grownups.” — @anotherjennd