Census data is in, and babies are affecting our salaries.
ByAnisa Arsenault
Associate Editor
PublishedApr 2018 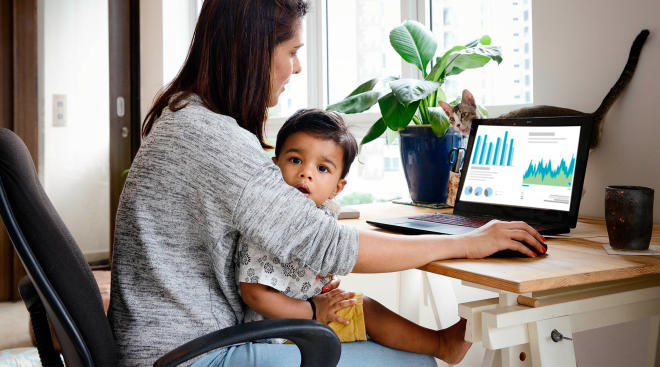 While the wage gap between women and men is no secret, how the wage gaps affects working moms, in particular, is more of a mystery. What’s the cost of a having a baby if that baby puts your career on hold? Are we even allowed to ask a question like that?

A working paper published by the Census Bureau is going there. After looking at annual incomes from husbands and wives who had their first child between 1978 and 2011, the paper found the pay gap doubles after the first birth, since the woman’s salary drops while the man’s continues rising. That gap can close, eventually, but likely only if you gave birth before the age of 25 of after the age of 35.

The problem? The prime career-building years coincide with the prime childbearing years: 25 through 35. And despite dads stepping up as caretakers, moms still spend almost twice as much time on child care and house work, even when they’re working full-time. As a result, the put in few hours in the office during the years that they need to be proving themselves at work, and are less likely to be considered for raises or promotions.

For women who give birth after 35, there’s a few reasons why they might have a better shot at closing the pay gap. Census data shows they are more likely to have only one child (the pay gap increases with each child). These women also tend to have higher levels of education and work at higher-paying jobs, meaning they may have the seniority to create a flexible back-to-work plan and schedule without negatively impacting their salaries.

For women who give birth before 25, Census data shows they have less education and lower salaries. Since their careers haven’t even taken off yet, they’re starting out with a negligible pay gap.

Overall, the paper shows women earn $12,600 less than their husbands before having kids and $25,100 less after. If they do make up the wage gap, it takes about 10 years.

Naturally, hard working moms have been developing ways to solve the problem, or at least start to. Friends Jenny Galluzzo and Gina Hadley, for example, teamed up to create the Second Shift, a website that pairs moms who left their professional careers with companies looking to hire freelancers and consultants. Once you’ve landed a gig, you can use a service called Fairygodboss, created by moms and former coworkers Georgene Huang and Romy Newman, to ask about all the things you may not want to bring up on a job interview, like maternity leave and pumping rooms.