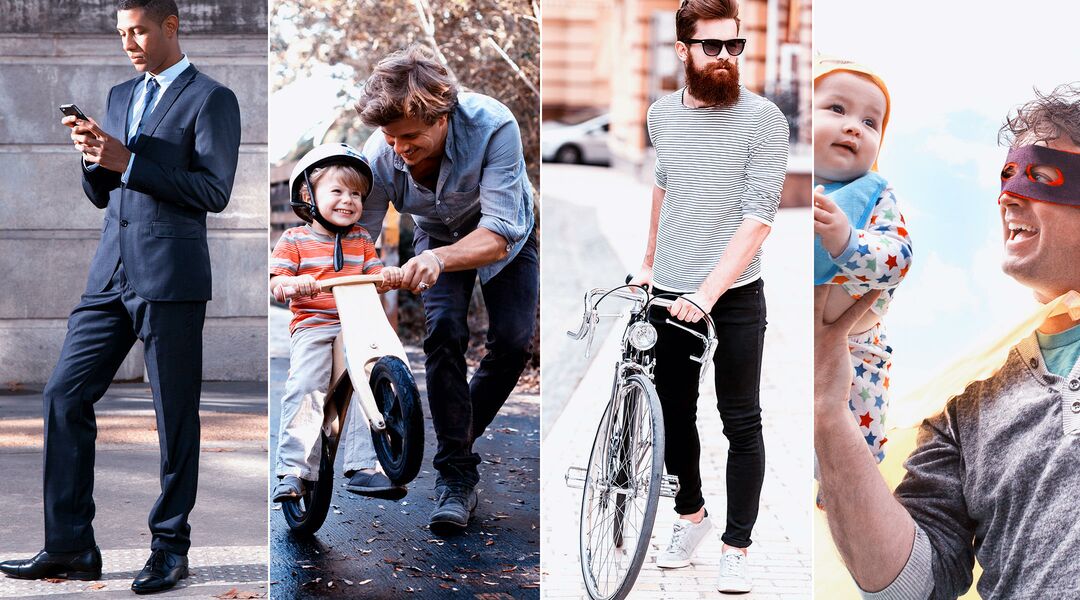 No more are the days where playgrounds and parks are populated solely by moms. As a dad, it’s cool to be at the park with your kid. And more likely than not, you might end up sharing it with a fellow father. These are the people you’ll turn to for advice, support and reassurance…maybe. Even though these dads don’t exactly share the same parenting style as you—and you may not see eye-to-eye on things like bottle feeding or babywearing—there are still some things you can learn from a few of them. Others, though? They might just make you roll your eyes.

The Workaholic Dad. This dad is attached at the hip—literally by a holster—to his work phone. His 3 year old may be suspended upside down from the monkey bars, but his face is buried in his email. He won’t look up to say hello unless he detects a networking opportunity, almost certainly job-related. Try to find out what he does and if you have any connections, otherwise you’ll never get a word in. He may not be the best expert to talk to about work/life balance, but he knows how to advance a career while still being a dad.

His natural habitat: On LinkedIn, but only if you have a few mutual connections.
Where you’ve actually seen him: Always on the closest park bench with his face lit by the glow of his phone’s email app. He’s likely typing frantically or yelling about closing on a conference call.

The Playful Pop. This dad thinks he’s just one of the kids. He wants to relive his childhood and isn’t afraid to do it through his child. He might be four times the size, but he wants to do everything his kid does too. Bent see-saws and broken swings are a sign he’s been there. He’s got great advice on child’s play, but isn’t the right person to talk to about difficult adult conversations or situations.

His natural habitat: About two feet away from his kid. Or on the swings by himself.
Where you’ve actually seen him: When you arrive at the playground, there are several fire trucks. When you get closer, you see several volunteer firefighters pulling this dad out of the slide he got stuck in while trying to ride it with his kid.

The Hover Dad. You can almost hear the helicopter blades whirring as this dad follows his kids around. Sometimes they might literally be attached by a leash or “safety tether.” He’s the dad you hear loudly discussing how unsafe wood chips are or grabbing his kid off the threshold of a slide because it’s too dangerous. He’s an expert on keeping a child safe and has read every single parenting book, and may have even written his own. He’s not the right person to consult with about letting a kid be a kid, though.

His natural habitat: Parenting book signings or parenting meetups.
Where you’ve actually seen him: Running around behind his kid, possibly attached to a backpack with a leash. Measuring the tensile strength of the swing set chain.

The Hipster Dad. He passes around a petition to have the water fountain changed to organic water. One day you return to the playground to find that the wood chips have been replaced with compostable, LEED-certified, artisanal chips from an old iron workshop in Brooklyn, NY. He’s the dad to ask about the best craft breweries for bringing children and possibly a dog (always a rescue mix). He also knows the best parenting gear from automated diaper disposals to wifi-enabled bottles. Just don’t show him your bottles or toys because they will inevitably be the wrong ones.

His natural habitat: Hanging out at the beer garden, kids and dog in tow. Try bonding over a craft brew and discuss the best bassinets.
Where you’ve actually seen him: At the organic supermarket, suggesting new products they should carry.

The Absentminded Papa. "Hey, is this your stroller or mine?” This dad can never remember which gear is his or even what his kid is wearing. He probably doesn’t remember feeding his child either, so you might see him giving them multiple snacks. Be careful about this dad wandering off with your things. He doesn’t mean to do it; he’s just got a lot on his mind. Don’t take his advice about the best gear because he probably doesn’t remember what he actually has.

His natural habitat: He may not have one (at least not one that he remembers), but when you get to the playground, he’s just leaving. He’s back five minutes later, though, looking for something he forgot, probably his kid.
Where you’ve actually seen him: Wandering helplessly at the local supermarket, trying to remember which is the milk aisle. You can try helping, but it won’t do any good. He’ll just forget again next time.

The Geek Dad. Why is Batman at the park? It’s just this dad doing his best to participate in his child’s interests. He might also be dressed as a stormtrooper to his kid’s Darth Vader. This dad loves playing dress-up with his kids and showing them the ropes on his favorite games and movies. If you need advice on what new movies to take your kids to, this dad is the one to seek out. Don’t you dare bring up the topic of Star Wars versus Star Trek to him, though.

His natural habitat: First in line at opening night of the latest superhero movie. His kid may or may not be there. He’s often at the closest video game or comic book store too.
Where you’ve actually seen him: At a comic-con, probably participating on a panel in a full costume of his own design. He may also be the neighbor who’s building a full-scale spaceship in his garage “for his kid”, but you aren’t fooled.

The Emo Dad. Baby’s first song wasn’t “Mary Had a Little Lamb;” it was the latest My Chemical Romance album. This dad’s in touch with all of his emotions, as well as his kid’s. He takes those baby cries seriously, and uses a decoder to figure out what they mean. He takes every sound of distress very seriously and thinks the Ferber Method is cruel and unusual and should be outlawed. He’s the best advisor on child psychology and feelings.

His natural habitat: At the record store if they still exist. Music concerts, child in tow, and often standing in the front against the stage. That super tall guy in front is actually his kid on his shoulders.
Where you’ve actually seen him: Asking his child how things make him feel on a park bench.

The (Super) Proud Pop. This dad thinks his kid’s diapers don’t smell bad, but you’ve smelled his kid running around the playground. He’s always pulling out his phone to show pictures of his kids even when they are right there. He’s the co-worker you have that works his kids into every story. He’s a great example of how positive reinforcement can encourage greater mental health and behavior, but he also shows you how doting can lead to spoiled kids.

His natural habitat: He’s the one taking pictures and videos of everything his kids do at the park. You can’t miss him as he yells for his child to do something again so he can get it on video.
Where you’ve actually seen him: You probably already know him. He’s the co-worker who approaches you every Monday with pictures of his weekend exploits with his kids. All of his stories start with, “You’ll never believe what my kid did.”

The Hero Dad. This dad was bitten by a radioactive spider but only got the ability to do super-human dad things. He’s always prepared with extra wipes and diapers, and will share some of his kid’s snacks when you forget. You once saw him grab a runaway stroller right as the front wheel went over the curb into a busy street. He knows the schedule for every school event and project due date, so give him a call when you can’t find it. He’s the perfect role model for parental responsibility, it just might be a model that’s impossible to live up to. Keep him around for the times when you need saving.

His natural habitat: When danger rears its head, he’ll be there. Just flash the super-dad signal, or drop a baby bottle onto the street and he’ll be there to grab it.
Where you’ve seen him: Whisking from parent to parent, child to child, making sure everyone and everything is okay—wherever that may be.

The Handyman Dad. This Daddy Fix-It knows how to solve any problem that can be solved with a wrench or a hammer. He built his kid’s crib from a tree that was felled by a lightning strike, while you could barely follow the IKEA instruction manual and are still wondering where that leftover screw was supposed to go. This dad is the perfect friend to have around when you need to put together a new toy, assemble a new race car bed or install a Swedish sauna in the basement.

His natural habitat: Search the aisles of your local hardware store and you’ll find this dad.
Where you’ve actually seen him: He’s the one who fixed a creaky swing set with a paperclip and a Band-Aid. He’s behind the wheel of that old Volvo or Subaru, keeping it running through his own sheer will.

The Coach. Merely being a soccer dad isn’t enough for this dad. He’s also in charge of the T-Ball and basketball teams and teaches toddler swimming lessons at the community pool. He’s also coaching his kid to be the next jai alai superstar. His parenting style may be intense and commanding. He gets results, though: the team always wins, even if you’re not sure any of the kids actually want to be playing. At least the pizza parties are fun.

His natural habitat: At just about every athletic field or facility in the neighborhood. Try the soccer fields, basketball court, swimming center, squash courts and maybe even the cross-country trail.
Where you’ve actually seen him: At every team sport your kid is involved in. He might not be coaching all of the teams, but he’s involved in some way, even if it’s just yelling at the referees.

The Manny. His own kids just aren’t enough; he’s watching everyone else’s too. Often found organizing kids for group play or cleaning up messy kids, he’s always involved, even when you don’t want him to be. He can be a great asset when you need a hand, but you may want to keep him at arm’s length or your child might get confused who is his actual parent.

His natural habitat: He’s at the playground every single day. He can also be found stocking up on children’s supplies at the local superstore.
Where you’ve actually seen him: Directing play from the top of a slide, pointing like Columbus commanding his ships. Spritzing your child with stain remover for the grass stains they’ve picked up.