Learn everything from when to start solids to which ones are best for baby to try first.
Save article
ByThe Bump Editors
UpdatedMar 2017 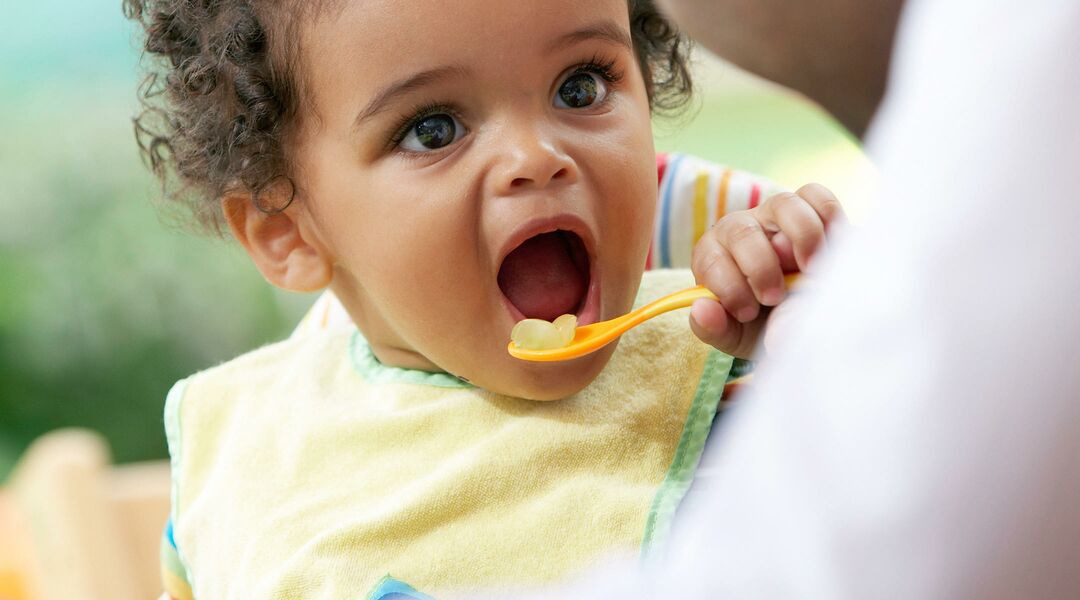 When should I start feeding baby solids?

Baby will probably start giving you signs that she’s ready for solids at around six months. By now, she should be able to play an active part in the feeding process, but more importantly, the enzymes in her digestive track should be mature enough to break down more complex foods. Wondering how you can know for sure? Here are some general indicators that she’s ready to start eating with her big girl spoon:

[ ] She’s sitting up (either assisted or unassisted) and holding her head up straight.
[ ] She opens her mouth for a spoon and can close her lips over it.
[ ] She’s able to let you know that she’s either full or hungry (turns her head away from the spoon if she’s full or keeps her mouth open if she’s still hungry). This is important because it shows baby knows how to self-regulate the amount of food she eats.
[ ] She keeps her tongue low and flat when you put the spoon in her mouth.
[ ] She shows an interest in food that others around her are eating.

Remember: Introducing solids can be a pretty exciting time, but for baby, it can also be a little scary — especially if she’s not developmentally ready yet. So take cues from what she can do already and don’t always go by how old she is.

Which foods should I try first?

The standard first food is rice cereal mixed with breast milk or formula, though pediatricians also recommend trying regular oatmeal. After introducing whole grains, move on to strained, mashed, and finely pureed fruits and veggies like bananas and sweet potatoes. Remember to allow about a week between each new food introduction to monitor for allergic reactions.

At eight months or so, try pureed or finely chopped table foods like turkey and cottage cheese. Stay away from honey until baby is at least a year old, and watch out for common allergens like peanut butter, shellfish, egg whites, and citrus. Above all, don’t ever force foods — if baby repeatedly refuses to try something new, he’s simply not ready yet. And remember, baby still needs breast milk or formula until he’s at least a year old. Also, keep in mind that breastfeeding or formula feeding should remain the main source of nutrition throughout the majority of baby’s first year.

What are some good finger foods for baby?

Once baby starts to develop her pincer grasp (around eight or nine months), you’ll be able to start thinking about offering her some beginner finger foods. Remember that finger foods are any foods that baby can easily pick up and mash between her gums. They’re also a great way to help baby begin to learn to self-feed. So which ones should you go with first? We recommend starting with any foods that baby has already eaten and anything that you can make into small, soft bits. Remember: Baby won’t actually be chewing the food until she gets her molars. Until then, she’ll just be mashing it between her gums.

You’ll want to serve finger foods as part of the main meal. For example, you may need to spoon feed cereal and peaches, but baby can manage to feed herself small pieces of cracker. Here’s a quick list of what you might want to try first: