What Are Your Pregnancy Cravings?

You can’t explain why, but it’s fatty (or sweet or salty) and you want it. Now! Here are some healthy ways you can satisfy those crazy cravings. 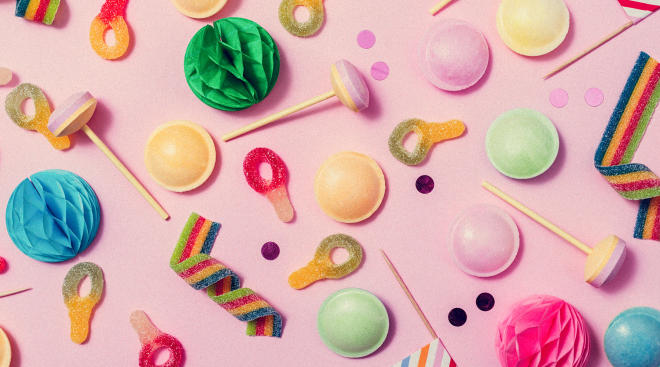 You can’t explain why, but it’s fatty (or sweet or salty) and you want it. Now! Here are some healthy ways you can satisfy those crazy cravings. 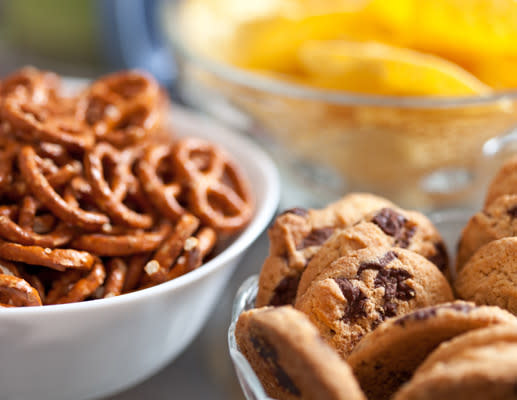 We’ve all heard the cliché: partners sent out searching for pickles and ice cream to satisfy a 3 a.m. urge. It may not be those exact foods, but pregnant women know this is no joke. Food cravings are strong and hard to ignore.

Pregnancy experts haven’t figured out exactly why women crave certain foods while pregnant, but they know how to prevent unhealthy snacking. “We do know that eating regular meals and snacks can keep a woman from overindulging,” says Swinney. “By eating a little protein at meals and with snacks, and eating high-fiber foods like fruits and vegetables, you can keep that late-night fridge rummaging to a minimum.”

But when the foods you want aren’t the healthiest, you have a dilemma. How do you satisfy the need to snack without throwing healthy eating out the window? After all, most pregnant women only require 300 extra calories per day (and that’s just a healthy snack or two). Here’s what to do if you’re craving unhealthy food. 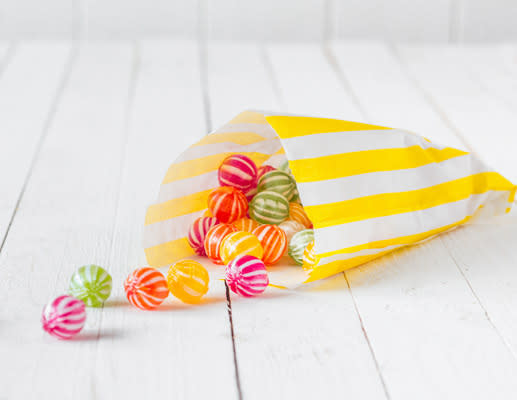 Be it gummy bears, jelly beans or peanut butter cups, candy is a popular pregnancy craving. To keep from going overboard, put your favorite candy in the freezer, says Paola Mora, RD, CDN, who counsels pregnant women at Montefiore Medical Center in New York City. “I will eat an entire bag of M&M’s Pretzel candies without a problem,” she says. “But if it’s been in the freezer, it takes a lot longer to chew through.” And the longer it takes you to eat something, the less likely you are to overeat it. Mora also suggests using fruit to satisfy your sweet tooth. Mangoes, bananas and grapes are among the sweetest fruits, and unlike candy, they also deliver fiber and nutrients such as potassium and vitamins A and C. Craving something with a bit of crunch? Snack on a handful of trail mix. Sweeten it up with a small piece of dark chocolate or dried fruit. 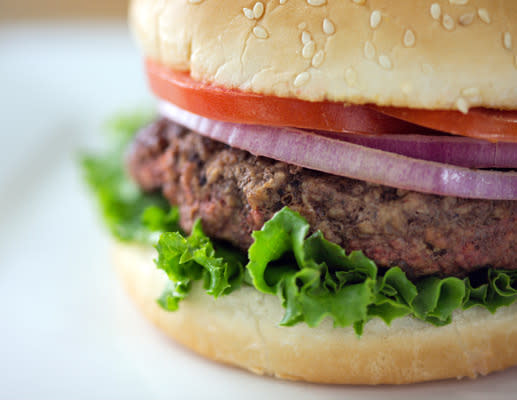 If a burger is what you crave, opt for one made with turkey or veggies rather than beef. Turkey and soy-based burgers deliver iron and protein, both of which your baby-growing body needs, says Mora. But they’ll often do it with fewer calories and less fat than a typical beef burger. Adding a slice of cheese is a good way to get some calcium — just choose a low-fat version. And load up on as many vegetable toppings as you can: lettuce, tomatoes, pickles, onions, mushrooms, roasted peppers. Veggies are packed with vitamins and fiber that will help you feel fuller longer.

But the most important thing to remember with burgers, Mora says, is making sure they’re fully cooked. “The meat should have no pink whatsoever,” she says. As part of pregnancy, your immune defenses are muted, which means your ability to fight off bacteria in undercooked meat is compromised. 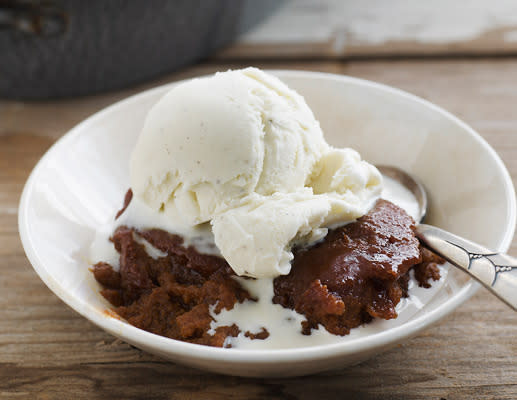 While a pint of Chunky Monkey has the calcium your body needs to grow baby, it also has 10 grams of saturated fat, 27 grams of sugar and 290 calories per serving — and there are four of those in that pint! The key here is portion control: Spoon out one serving, about half a cup. Or opt for frozen yogurt, real fruit sorbets or artificially sweetened ice cream bars. “Some sweeteners, like Splenda, are perfectly safe to have during pregnancy,” says Mora. 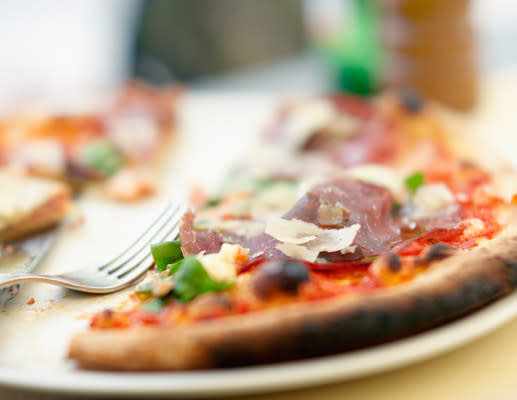 The good news is, it’s easy to turn pizza into a healthy option, says Bridget Swinney, RD, author of_ Eating Expectantly_. Opt for lower-fat Canadian bacon instead of sausage or pepperoni. And load up your pie with lots of vegetables: Olives, mushrooms, zucchini and bell peppers add fiber and are rich in nutrients such as vitamin C and potassium. Pizza is also a great opportunity to add spinach to your diet, which helps fetal brain and eye development, Swinney says. “Antioxidants like lutein aren’t in prenatal vitamins,” she says. “Spinach is a great source of lutein.”

When ordering your slice — or making it yourself — choose a whole-wheat crust, a flour tortilla or a piece of pita bread. Select a low-fat cheese to save on calories and dip your crust in tomato sauce to get an extra dose of lycopene and other nutrients. 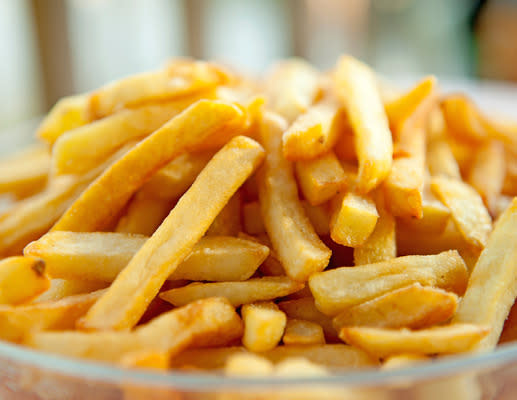 French fries feed a pregnant woman’s craving for salt and potassium. The problem is, they’re high in calories and fat, and are a starchy, blood-sugar-boosting carbohydrate. To get your fix a healthier way, go for sweet potato fries. Sweet potatoes have a lower glycemic index than white potatoes, so they may make you feel fuller longer. If you’re whipping them up at home, toss the sweet potatoes with a little olive oil and salt and bake them. You’ll get the same great taste without the fat and calories added by a turn in the deep fryer.

Or have a baked potato (don’t skip the nutrient-rich skin) and top it with veggies like broccoli, cauliflower or onion. Eating a whole spud will satisfy your potato craving while keeping you from overindulging. After all, it’s easy to stop at just one potato; it’s tough to know when to stop with fries. 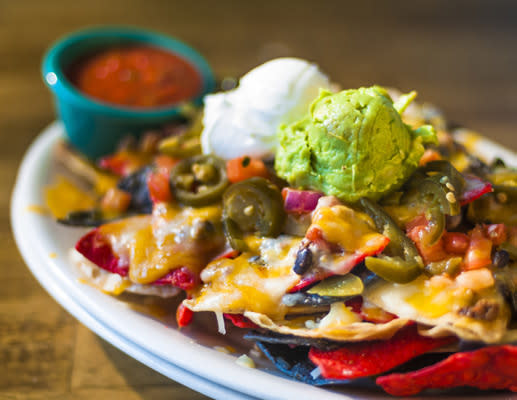 Prevent overdoing the nachos by dishing some out onto a side plate for yourself. Go heavy on the vegetable-rich salsa and easy on the high-fat sour cream. Resist the urge to go back for seconds! Making them at home? Use baked chips and low-fat cheese and sour cream. And add diced avocado. It has folate, an important brain-building nutrient for baby. Spice things up with a serving of vegetarian refried beans — they may be lower in fat and are a great source of fiber and iron, one of the most important pregnancy nutrients because of its role in blood production. 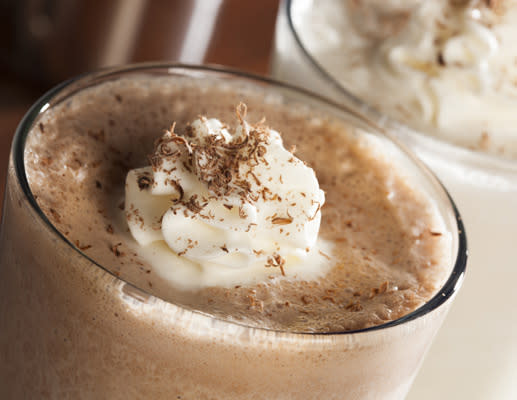 When morning sickness settles in, a milk shake might be the only food you can stomach (literally). But watch the calories: A large chocolate shake from a popular ice cream joint packs 1,290 calories, 58 grams of fat and — get this —168 grams of sugar. That’s nearly a full cup of sugar! Opt for a small and you’ll cut that in half: 620 calories, 30 grams of fat and 77 grams of sugar. Not great, but better. After all, eating too much sugar during pregnancy increases your risk of excessive weight gain and gestational diabetes, says Mora.

To satisfy this craving without the sugar overload, Swinney recommends making a smoothie instead. Combine frozen bananas, cocoa powder and low-fat frozen yogurt or low-fat milk with ice in a blender. Or, if that’s too much work, opt for a teeny bit of ice cream over a shake: a 2.5-ounce scoop of chocolate will run about 170 calories, 9 grams of fat and 19 grams of sugar. 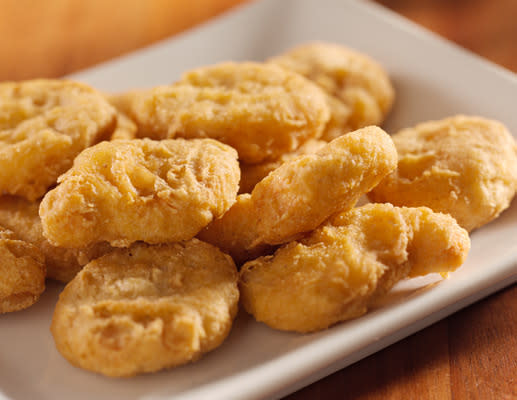 Those golden-brown nuggets look so innocent. But consider: At one fast-food chain, a 10-piece order delivers 470 calories and 30 grams of fat. And that doesn’t count the fries you’ll probably order with them. “If you just have a little craving and can get by with a few nuggets, that’s one thing, but if you need a super-size order and get the fries too, that’s a not-so-super meal,” says Swinney. So instead of loading up on nuggets, order a plain chicken sandwich — grilled is best, but even a basic crispy sandwich (not extra-crispy) has fewer calories than an order of nuggets does. Another advantage: Portion control is easier with a sandwich than it is with that big box of nuggets. Pair the chicken with a salad and you’ll get fiber to help you feel fuller longer (and prevent constipation!).

Foods to Avoid During Pregnancy 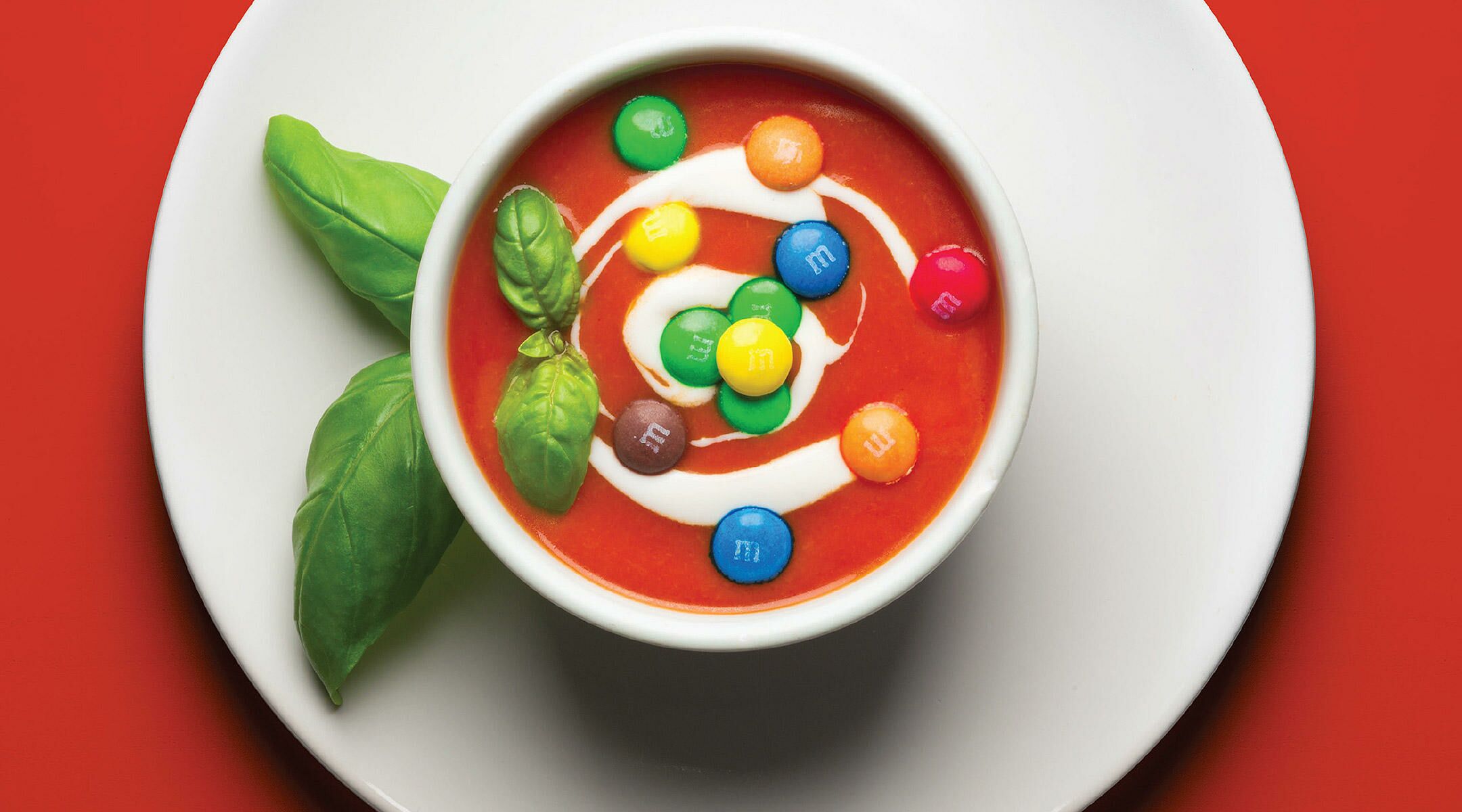 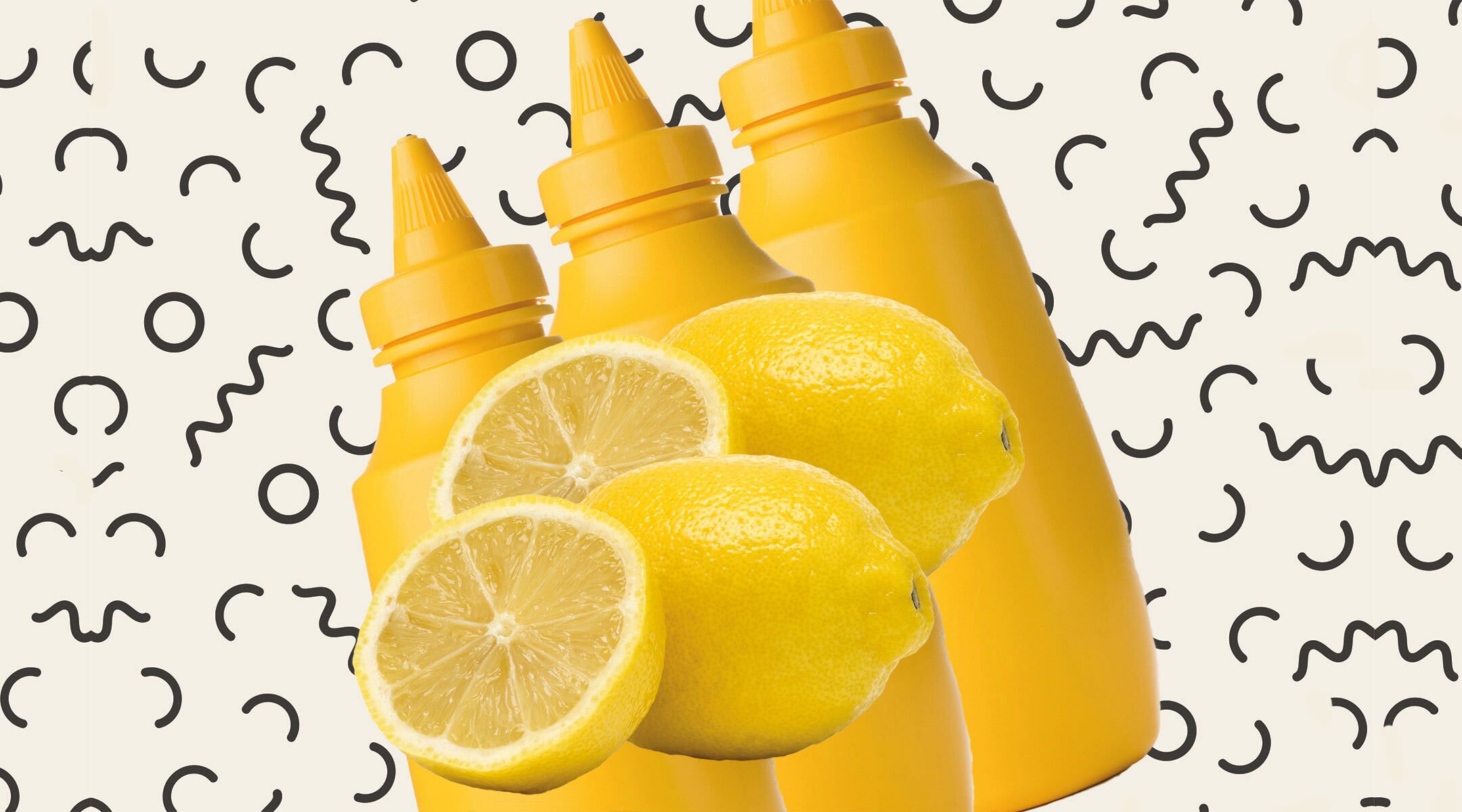